Please ensure Javascript is enabled for purposes of website accessibility
Log In Help Join The Motley Fool
Free Article Join Over 1 Million Premium Members And Get More In-Depth Stock Guidance and Research
By Chad Henage - May 29, 2021 at 8:45AM

Bitcoin is still down about 40% from its recent high, but there are several reasons to believe the future is golden.

With some cryptocurrencies down 40% or more from their recent highs, crypto investors may be nervous about what comes next. But despite the volatility, there are at least three good reasons for bitcoin (BTC -0.35%) investors to believe in the cryptocurrency's future.

To say bitcoin has been on a wild ride in the last year is an understatement. Just since May of last year, bitcoin rose from about $9,400 to over $64,000 by April 2021. Bitcoin's recent correction gained steam based on two key factors. Elon Musk seemed to back away from his support of bitcoin based on the idea that bitcoin mining uses a tremendous amount of power. This doesn't fit within Tesla's (NASDAQ: TSLA) eco-friendly stance. The second issue was China cracking down on the use of crypto as a form of payment.

1. Redrawing the line between gambling and investing

Though bitcoin's price has been volatile, increased acceptance as an investable asset class seems to bode well for its future. Square (SQ -1.20%) was one of the first companies to help move bitcoin into the mainstream through its Cash App. In case there was any doubt about the popularity of bitcoin, Square's bitcoin business jumped 11-fold  to more than $3.5 billion in the company's most recent quarter. The financial company has constantly referenced bitcoin engagement within the Cash App as one of its growth pillars. 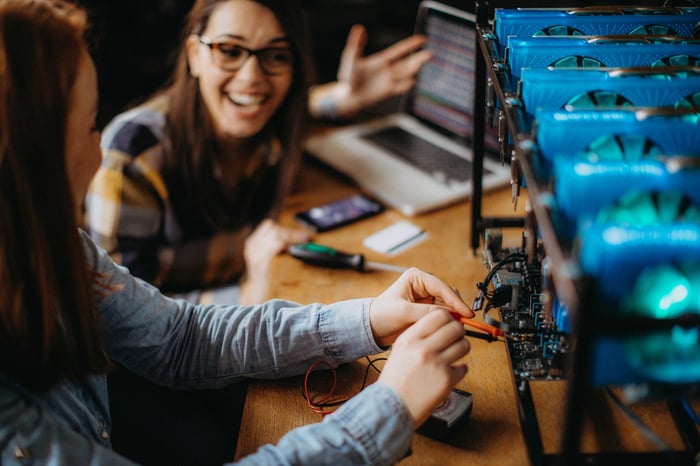 PayPal (PYPL 0.62%) isn't content to let Square corner bitcoin enthusiasts. The payments company wants customers to feel comfortable with crypto as a form of payment, ofering to "put the currency back into cryptocurrency." Many investors are still trying to learn about what crypto is and how it might fit their life. Though many companies allow investors to buy crypto, the are relatively few debit card or payment options, that allow people to spend crypto directly. PayPal is offering to automatically convert crypto to spendable currency to make payments wherever PayPal is accepted.

It's one thing for retail-focused companies to attract customers with bitcoin options. However, Goldman Sachs' head of digital assets, Mathew McDermott, said the investment firm's institutional clients have moved beyond learning about crypto and are requesting access to it for their portfolios.

Wells Fargo (WFC 0.51%) wants into the bitcoin business as well. The bank will soon offer a professionally managed solution for clients involving cryptocurrency. John LaForge, the bank's head of real asset strategy said , "We think the cryptocurrency space has just kind of hit an evolution and maturation of its development that allows it now to be a viable investable asset."

There's a method to bitcoin mining's madness. A study from 2018 in Applied Economics Letters suggests a theory behind the price of bitcoin: The value of a single bitcoin is correlated to the cost to mine that coin.

Given this backdrop, it makes sense to look at the costs that go into mining. One of the primary costs miners deal with is the graphics card(s), or ASIC miner(s), that generate most of the processing power. Graphics cards and ASIC miners are suffering from ongoing supply shortages. Theoretically, as the cost to acquire mining equipment increases, so should the price of bitcoin.

The largest supplier of bitcoin mining gear is Bitmain, which reportedly is sold out until at least August of this year. Where graphics cards are concerned, Nvidia (NVDA -1.03%) believes the GPU shortage is likely to continue through 2021. Due to supply shortages, it's a regular occurrence for scalpers to buy and then resell mining equipment with a significant markup.

Investors should note that bitcoin mining is also limited to one block every 10 minutes, so miners can't speed up production to churn out more coins. With high demand, set production, and increased costs to acquire mining equipment, bitcoin's price should rise as long as these trends continue. The challenge with these trends is scarcity driving costs up also means driving out less capitalized competition. According to Fitch Solutions, a data analytics firm, the chip shortage affecting miners could last at least until 2023.

First, Ethereum's moving to proof-of-stake because of the vast number of applications trying to run on the current network. A proof-of-stake network, which requires far less computing power to verify transactions, can help Ethereum's network expand and become more efficient.

Second, the bitcoin network has been developing a lightning network since 2015. Think of it as an access road that connects to the bitcoin highway, but also runs parallel. In bitcoin's traditional network, each new transaction is linked and reaffirmed with all of the other data on the network. Using the lightning network, two parties can essentially send and receive between each other multiple times without including the main network in every single transaction. This way, bitcoin transactions can fork off the main road and create many smaller transaction sideroads that don't have to clog up the main network. As new lightning-supported crypto wallets become more prevalent, the bitcoin network should be faster and theoretically cheaper to use.

Lastly, bitcoin's limited supply argues investors should favor holding the coin as a scarce asset. Unlike bitcoin, Ethereum doesn't have a hard cap on its supply overall, which means it can much more easily pay interest to stakeholders by giving them more ETH. Bitcoin's hard cap of 21 million total coins means that at some point, stakeholders would no longer be able to generate additional interest in bitcoins, because the cap would have been reached.

Bitcoin investors can also draw encouragement from the similarities between bitcoin and gold. Gold holds value not only from its relative scarcity, but also because it requires work and time to mine the metal. There are an estimated 190,000 tons of gold above ground. Each year, roughly 2,500 to 3,000 tons of new gold is mined. Given the costs and limitations of profitable mining, statistical research suggests that large-scale gold mining won't continue much past 2075.

Bitcoin's future supply sounds similar to its real metal counterpart. The crypto equivalent of gold has a circulating supply of about 18.7 million coins. By design, Bitcoin sets its maximum supply at about 21 million coins. Bitcoin mining generates a block every 10 minutes worth 6.25 bitcoins. Blocks are reduced by 50% automatically every 210,000 blocks, or roughly every 4 years, which reduces bitcoin's inflation rate. With these calculations, investors know the final bitcoin should be mined around 2140.

Even Sylvia Carrasco, CEO of gold exchange Goldex, finds similarities between gold and bitcoin. In a questionnaire by Markets Insider in February 2021, Carrasco was asked if she would rather hold gold or bitcoin over the next ten years.  She noted, "Bitcoin and gold both have significant advantages over fiat currencies because neither can be diluted or debased."

While bitcoin is certainly more volatile than gold or many stocks, its returns significantly outperformed these other assets over the last two years in particular.

Investors can't afford to ignore an asset that has outperformed others by this margin. Bitcoin seems to get a new stamp of approval from different companies on a regular basis. The squeeze on supplies of efficient mining equipment increases the cost to produce the coin. As bitcoin moves toward mainstream adoption, gold and crypto seem ever more similar.

After the recent crypto correction, Bitcoin trades at a nearly 40% discount to its 52-week high. Investors looking for confidence in bitcoin's future can watch for future expansions of bitcoin into more mainstream financial transactions. In late May 2021, PayPal announced it would now allow users to transfer bitcoin outside of PayPal's internal crypto wallet for the first time. This will allow users to freely move their bitcoin to other sites for trading, or to make payments to their friends directly with crypto instead of having to convert their crypto to cash first.

When it comes to tracking the mining side of the equation, investors can keep up with Nvidia as a way to track how supplies are moving. As long as Nvidia's supply is constrained, there is a decent chance that mining costs are up, which would seem to support bitcoin's price. But investors should remember that bitcoin is closer to the crypto world's version of gold, not the dollar. While it's important that bitcoin be usable, the fact that institutions and individuals want to hold bitcoin in their portfolios is another factor to watch. Those worried about having missed the big move in bitcoin may be getting another chance with the recent correction.