Please ensure Javascript is enabled for purposes of website accessibility
Log In Help Join The Motley Fool
Free Article Join Over 1 Million Premium Members And Get More In-Depth Stock Guidance and Research
By Leo Sun - Jun 1, 2021 at 9:09AM

One of these stocks will hold up better in this volatile market.

I compared these two tech stocks last August, and declared Microsoft's broader diversification, more reliable returns, and lower valuations made it a better investment. Both stocks have risen about 20% since I made that call, so there isn't a clear winner yet. Let's take a fresh look at both companies to see if my original call holds up for the rest of the year. 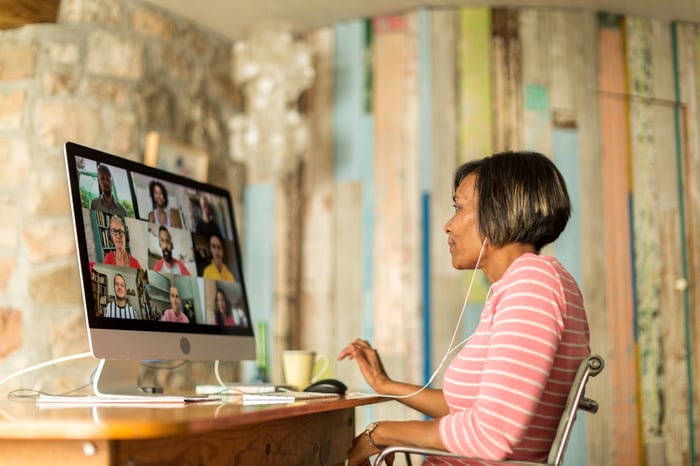 Zoom operates a freemium platform, which grants paid users longer time limits, support for bigger meetings, cloud-based recording, and other perks. Its revenue surged 326% to $2.65 billion in fiscal 2021, which ended this January, as its net profit jumped more than 30 times to $672 million. On a non-GAAP basis, its net income increased nearly tenfold to $996 million.

Zoom expects its revenue to rise 42%-43% in fiscal 2022, and for its non-GAAP EPS to nearly triple. Those are incredible growth rates, but it's unclear if Zoom can keep growing after the pandemic ends and people go outside again.

Meanwhile, a growing list of competitors -- including Microsoft Teams, Alphabet's Google Meet, Facebook's Messenger Rooms, and Cisco's Webex -- are all trying to pull users away from Zoom.

Those dynamics make Zoom a divisive stock. The bulls believe it will remain synonymous with video calls as it locks in its users with additional services and perks. The bears believe it will struggle to keep pace with its larger competitors, many of which can afford to undercut Zoom's prices.

Microsoft is on firmer ground

Microsoft's revenue increased 13% to $143 billion in fiscal 2020, which ended in June, and its adjusted EPS rose 14%. Its Productivity and Business Processes segment, which provides productivity software to enterprise customers, struggled in the second half of the year, but the growth of its other businesses cushioned the blow.

In the first nine months of fiscal 2021, Microsoft's revenue rose 16% year-over-year to $122 billion as its adjusted earnings increased 35%. All three of its core businesses (Productivity and Business Processes, Intelligent Cloud, and More Personal Computing) grew their revenues and operating profits year-over-year.

A lot of that growth came from its Commercial Cloud, which includes the Office 365 productivity suite, the CRM (customer relationship management) platform Dynamics 365, and Azure, the world's second-largest cloud infrastructure platform after Amazon Web Services (AWS). Its Commercial Cloud revenue rose 33% year-over-year to $49.6 billion, or 41% of its top line, in the first nine months of 2021.

Neither stock is cheap, but Microsoft is still a better buy

Zoom trades at about 80 times forward earnings and 25 times this year's sales. Those high valuations, along with its uncertain future in a post-pandemic world, could keep the bulls at a bay.

Moreover, inflation fears, rising bond yields, and a focus on post-pandemic plays have sparked a rotation from growth to value stocks over the past several months. That trend already erased a big chunk of Zoom's gains from last year, and could further throttle its growth throughout the rest of the year.

Microsoft trades at 30 times forward earnings and eleven times this year's sales. Those valuations are historically high, but its reputation as an evergreen tech stock should keep investors interested.

Its forward yield of 0.9% won't attract any serious income investors, but its low cash dividend payout ratio of 30% indicates it has plenty of room for future hikes. Zoom has never paid a dividend.

Based on all these facts, I'm reiterating my previous call that Microsoft is the better overall investment for most investors. Zoom is still a disruptive company with plenty of growth potential, but I'm still not confident enough in its future to consider it a good long-term investment.