The chip shortage is hitting the entire industry. Here's what investors should focus on.

Chinese electric-vehicle (EV) maker NIO (NIO -4.42%) said that its deliveries fell 5.5% sequentially in May to 6,711 vehicles, after its manufacturing was disrupted for several days due to tight supplies of semiconductors.

NIO, like many other automakers, has been forced to reduce production in recent months due to a global shortage of semiconductors, a result of increased demand for computers and other personal electronics amid the COVID-19 lockdowns last year.

But the company said it still expects to deliver on its upbeat second-quarter guidance. 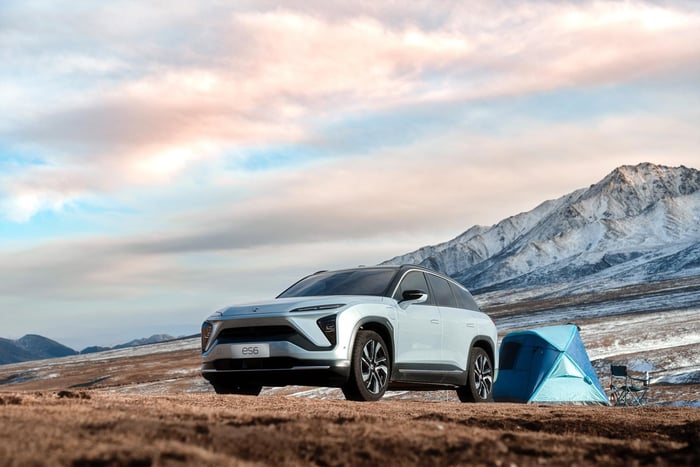 The five-passenger ES6 continued to be NIO's best-seller in May, although deliveries were down a bit from April because of chip-supply issues. Image source: NIO, Inc.

NIO's May sales decline shouldn't come as a surprise to auto investors. NIO warned in April that it anticipated chip-related disruptions to its production plan. At the time, it said that it expected supplies of chips to improve in the second half of 2021 -- and that despite the chip shortage, it expected to be able to deliver about twice as many vehicles in the second quarter as it did in the year-ago period.

NIO reiterated that guidance in its June 1 deliveries statement. The company said it believes it will be able to make up the lost production in June, and that it's still on track to deliver between 21,000 and 22,000 vehicles in the second quarter. 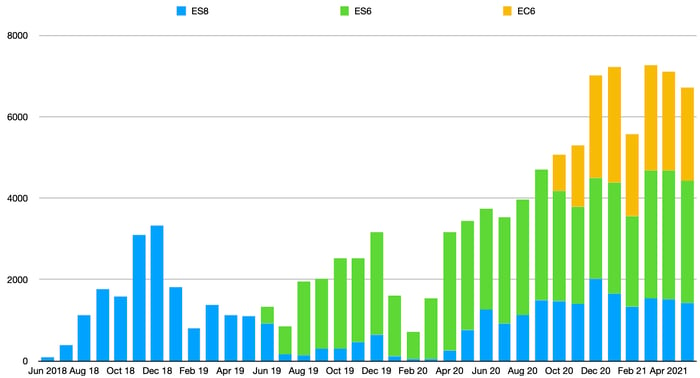 Data source: NIO, Inc. Chart by author. The chart shows NIO's monthly delivery totals, by model, since the debut of the ES8 SUV in late June of 2018.

As you can see from the chart, it appears that NIO reduced production of each of its three models by roughly similar percentages. The company delivered 1,412 of its flagship ES8 SUVs, 3,017 of its five-passenger ES6 crossovers, and 2,282 of its EC6, a sporty variant of the ES6 with a sloping, coupe-like roofline.

Many Chinese automakers cut production in May, but not all

NIO wasn't the only Chinese automaker hit by production disruptions in May. The China Association of Automobile Manufacturers said last week that vehicle output at the 11 largest auto groups, including both domestic Chinese makers and global automakers' China-based manufacturing operations, fell 11% in the first 20 days of May to about 983,000 vehicles.

But not all of China's EV makers were adversely affected. NIO rival Xpeng (XPEV -3.94%) said that it delivered 5,686 vehicles in May, up about 10% from April on strong demand for lower-cost models with lithium iron phosphate batteries.

Another NIO rival, Li Auto (LI -3.26%), is expected to release its May delivery totals on June 2.

Some thoughts for NIO investors

Second, the fact that NIO was able to warn investors that its production would be disrupted by the chip shortage is a good sign, in the sense that it emphasizes that the company's internal controls have come a long way from the dark days of early 2020. Remember that this is a company that has grown very quickly over the last couple of years.

Finally, I think NIO investors can find some reassurance in the fact that NIO reiterated its second-quarter deliveries guidance, and in the fact that production at other Chinese automakers was impacted in May as well.

The chip shortage is a storm affecting automakers all over the world; what we as investors want to see is how well NIO sails through it. So far, it appears to be staying on course.