Please ensure Javascript is enabled for purposes of website accessibility
Log In Help Join The Motley Fool
Free Article Join Over 1 Million Premium Members And Get More In-Depth Stock Guidance and Research
By David Jagielski - Jun 2, 2021 at 6:38AM

Boston Beer is preparing for U.S. federal legalization of marijuana.

When Constellation Brands announced it was investing in pot producer Canopy Growth back in 2017, it marked a major turning point for the industry, with outsiders beginning to show a lot more interest in cannabis. Since then, Molson Coors has gotten involved in the development of cannabis-infused beverages, as has Anheuser-Busch. With the volume of beer sales declining by 2.9% last year, the industry could benefit from more growth opportunities, so it may not be surprising if companies turn to a hot new sector like cannabis.

One more big name that is starting to explore cannabis is The Boston Beer Company (SAM 2.25%). Last month, management announced it would be dipping its toes into the industry and begin researching nonalcoholic beverages. Is a move into cannabis drinks inevitable for Boston Beer, and if so, does that make the stock a must-buy? 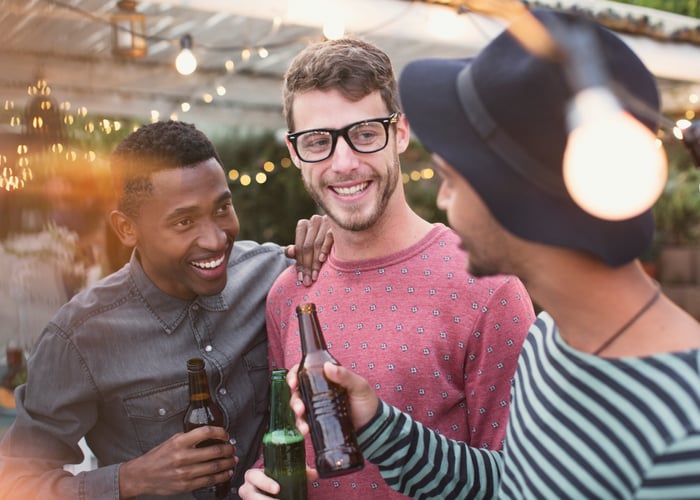 On May 14, Boston Beer announced that it was going to set up a subsidiary that would be a "research and innovation hub" for cannabis beverages in Canada (where pot is legal federally). The company did not offer a date as to when it might sell the beverages, but that's understandably hard to estimate right now given the federal ban on cannabis in the U.S. And while management is researching cannabis beverages north of the border, they haven't given any indication of plans to sell them there. The focus appears to be on the U.S. market. CEO Dave Burwick stated in the release that the company "[wants] to be ready for future opportunities in the U.S."

Boston Beer is simply focusing on innovating the next wave of products and making sure that it is ready to go when the federal government legalizes marijuana in the U.S. Although more states are legalizing pot (New York, New Mexico, and Virginia are among the latest to pass legislation), it's unclear when pot will be legal federally; President Joe Biden has only gone so far as to talk about decriminalizing pot, not outright legalization.

Many potential partners out there

While Boston Beer is going to create a subsidiary, it's possible that it could also join forces with a cannabis company to expedite the process. Many cannabis producers would likely be eager to partner up with the top beer maker. In the past, Aurora Cannabis was looking for a deal and was even rumored to be in talks with Coca-Cola. Sundial Growers, which is sitting on lots of cash, presents another option -- management there could be looking to make a big move to bolster their sales numbers. And those are just some of the bigger names out there; Boston Beer wouldn't have a problem finding potential suitors to work with if it went that route.

Why cannabis looks to be a great fit for the company

Boston Beer has been growing phenomenally over the years; sales of $906 million in 2016 grew to nearly double that in 2020, reaching $1.7 billion. In its most recent quarter, for the period ending March 27, the company has still done incredibly well. It posted sales of $545 million ,which were up 65% year over year due to a 60% increase in shipments. Boston Beer's willingness to change and adapt to consumer trends have led to this fantastic growth. The most recent example is hard seltzer products; its Truly brand has captured more than 28% of the market, according to the company's latest results.

Analysts at Grand View Research project that the market for hard seltzer will be worth $14.5 billion by 2027 and will grow at a compounded annual growth rate of 16.2% until then. By comparison, they project the cannabis beverage market to be worth just $2.8 billion in 2025, although its growth rate will be slightly higher at 17.8%. However, if the federal government lifts the ban on cannabis, those numbers could get a whole lot higher.

Getting into cannabis would give Boston Beer another high-growth segment in which to further grow its business. Like hard seltzer, it could be a catalyst for not just more sales growth, but more bullishness and excitement in the stock, especially as efforts to legalize marijuana progress. A move into the cannabis industry looks to be an inevitable one for a growth-oriented company like Boston Beer.

Should you buy Boston Beer on this news?

Boston Beer is a solid growth stock; news that it is looking into cannabis is a great sign that it will be ready once that segment of the market opens up. The company has done a great job with its Truly brand, and its Samuel Adams beer is well known around the globe. If it can replicate that success in cannabis and grab significant market share, then this stock could be on the path to even more impressive growth numbers. While it could still be years before Boston Beer launches any cannabis beverage products, buying the stock now could set investors up for some great returns down the road.

This Top Brewer Is Entering a Volatile Growth Industry