Please ensure Javascript is enabled for purposes of website accessibility
Log In Help Join The Motley Fool
Free Article Join Over 1 Million Premium Members And Get More In-Depth Stock Guidance and Research
By David Jagielski – Sep 8, 2021 at 8:12AM

Boston Beer created a subsidiary earlier this year to focus on the cannabis market.

The cannabis beverage market possesses some attractive growth opportunities for businesses. Analysts from Grand View Research expect that the global market will rise in value at a compounded annual growth rate of 17.8% over the next few years and be worth $2.8 billion by 2025. Getting an early position in the sector could allow businesses to benefit from strong market share later on.

Some of the world's top beer makers are already showing an interest in it, including Constellation Brands, which has partnered with Canopy Growth to produce beverages. Anheuser-Busch, known for its popular Budweiser brand, has a joint venture with Tilray. Similarly, beverage company Molson Coors has also been developing drinks with cannabis producer Hexo.

Investors can now add another big beverage company to the list, as The Boston Beer Company (SAM -0.42%) plans on producing cannabis-infused drinks before the end of this year. 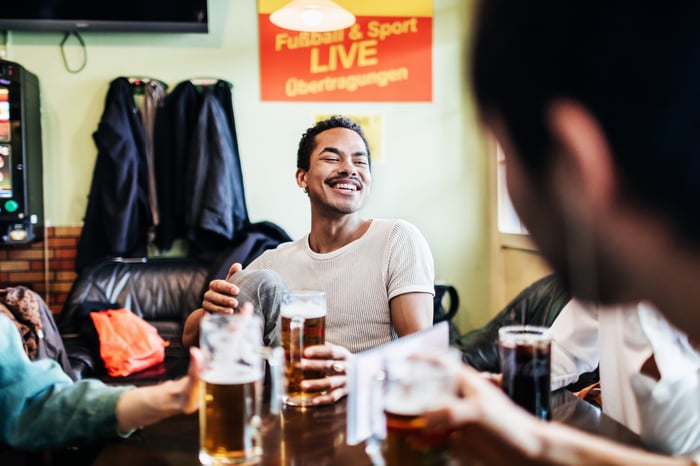 Subsidiary of Boston Beer reaches an agreement with two other companies

Earlier this year, Boston Beer created a subsidiary, BBCCC, which is based in Ontario and will focus on non-alcoholic cannabis beverages. On Aug. 31, the subsidiary announced that it would be partnering with marijuana companies WeedMD and Peak Processing Solutions to begin producing cannabis-infused beverages in the fourth quarter. The deal is good for five years, and Boston Beer will benefit from Peak's production facilities. Entourage Health (the parent company of WeedMD) will be the exclusive distributor; it has access to 95% of the retail cannabis market in Canada.

Is the field already getting too crowded?

As investors will likely note from the relatively small market size of the global cannabis beverage industry, this is a sector of cannabis that is still in its infancy. While it will be a good testing ground for Boston Beer to bring products to market and test them out, it likely won't lead to much revenue for the business.

Canopy Growth, which was one of the first cannabis companies to express an interest in beverages, hasn't been generating a whole lot of revenue from that area of its business. In fact, that company doesn't even separate out cannabis beverages on its income statement. Instead, it groups them with edibles, topicals, and vapes. Even combined, that line item generated just 13 million Canadian dollars' worth of sales during the period ending June 30 -- less than 10% of its top line. Hexo reported cannabis beverage sales of over CA$3 million for the period ending April 30.

Does this move make Boston Beer a buy?

Boston Beer reported net revenue of $602.8 million in its latest quarter (the period ending June 26), meaning any cannabis-related revenue it generates will likely have a minimal impact on its financials. It's a way for the company to expand its product line in preparation for a potentially larger market in the future, but it shouldn't be a reason to invest in the stock if you weren't already planning to do so. With many analysts expecting its shares to rise by more than 70% --and given the benefits that could come from a hot market for hard seltzer, including its Truly brand -- Boston Beer could make for a solid investment. Just don't expect cannabis to play a big role in that for the time being.

This Top Brewer Is Entering a Volatile Growth Industry

Another Big Beverage Maker Is Getting Into Cannabis
356%