Please ensure Javascript is enabled for purposes of website accessibility
Log In Help Join The Motley Fool
Free Article Join Over 1 Million Premium Members And Get More In-Depth Stock Guidance and Research
By Timothy Green - Jun 2, 2021 at 7:20AM

Shares of video game retailer GameStop (GME 0.40%) have rocketed higher this year. The company is now worth around $17 billion, not too far off from the $28 billion valuation of consumer electronics retailer Best Buy (BBY 2.84%).

For comparison: GameStop generated just over $5 billion of sales last year and posted a large net loss; Best Buy produced $47 billion of revenue along with record profits. If GameStop's stock price doesn't make sense to you, join the club.

GameStop's comeback strategy, laid out in its latest annual report, involves investing in technology, leveraging its digital assets, modernizing its fulfillment operations, and diversifying its product offerings to include PC gaming, computers, monitors, game tables, mobile gaming products, and gaming TVs. GameStop will be closing some of its stores as it refocuses on e-commerce.

Selling things beyond game console hardware and software sounds like a good idea. The used-games business is GameStop's profit engine, producing far higher gross margins than new gaming hardware and software. But that business has been in decline for a long time as console gaming goes digital. The used-games business is what made the GameStop model work in the past. It's not working anymore. 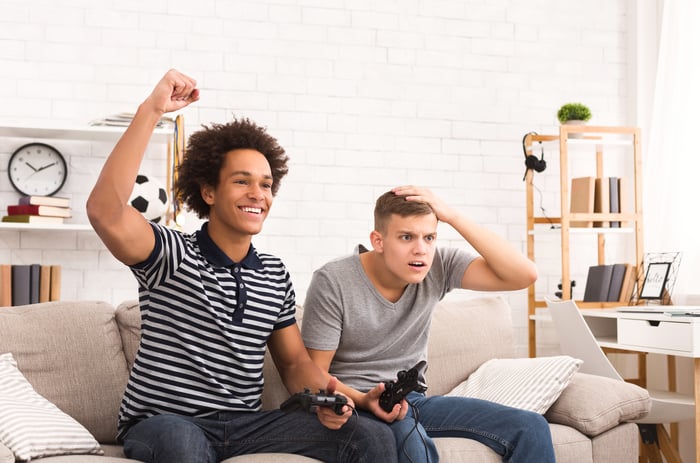 GameStop will be trying to steal away market share from retailers like Best Buy and Amazon.com with its diversification strategy. It won't be easy. For one, Best Buy is firing on all cylinders. The retailer reported incredible comparable sales growth of 37.2% in the first quarter of 2021. Gadget buyers are flocking to Best Buy, and GameStop will likely have a tough time pulling them away.

The other problem is that GameStop has already tried a diversification strategy in the past. It didn't work. The company acquired Spring Mobile, a retailer of wireless phones and plans, back in 2014. It expanded that business for years, talking up its technology brands segment as a key growth driver.

The company was touting its PowerUp loyalty program as a way to drive sales of products outside of console gaming hardware and software in 2015. It's doing the same now. GameStop is banking on its loyalty program to help retain customers as stores are closed and to help grow the company's market share in the broader online gaming market.

The plan, as recently as 2017, was to grow by expanding into new product categories beyond games and smartphones. At the time, GameStop was talking about expanding into connected-car products, wearables, and accessories.

GameStop ultimately sold off the Spring Mobile business in early 2019 and gave up on diversification. "We are pleased to successfully complete this transaction and begin 2019 with an increased focus on the video game industry and the rapidly growing collectibles space. These are areas where we are well positioned to leverage the GameStop brand and capitalize on our competitive position," said executive chairman Dan DeMatteo when the sale closed.

This time around, GameStop is at least focusing on gaming-related products. It's a better strategy than trying to sell smartphones and wearables, but it's still unlikely to work. Why would anyone walk into a GameStop store to buy a gaming PC? Why would anyone order a monitor from GameStop's website? GameStop is wading into some ultra-competitive product categories with deeply entrenched players.

This reminds me of when department store J.C. Penney tried to revive its fortunes by diversifying into large appliances. It failed miserably. The problem was that no one thought of J.C. Penney as an option for refrigerators and stoves. I suspect GameStop will have the same problem with PCs, TVs, and other consumer electronics.

GameStop was able to leverage its ludicrous stock price to raise cash by selling new shares earlier this year, which will certainly buy the company time. But diversification looks no more likely to succeed today than the last time GameStop tried it.