Please ensure Javascript is enabled for purposes of website accessibility
Log In Help Join The Motley Fool
Free Article Join Over 1 Million Premium Members And Get More In-Depth Stock Guidance and Research
By Howard Smith - Jun 3, 2021 at 10:10AM

The airline has signed a commercial agreement to buy supersonic jets from a Denver-based aerospace company.

United Airlines Holdings (UAL 1.73%) announced today that it has signed a commercial agreement with Denver-based aerospace company Boom Supersonic for 15 of Boom's Overture supersonic aircraft. The agreement also contains the option for another 35 planes, and includes what it calls a "cooperative sustainability initiative."

The Overture is not yet in operation or certified for flight, but Boom says the aircraft will cut travel times in half and operate on up to 100% sustainable aviation fuel. The Overture will be the first large commercial aircraft designed to be net-zero carbon, the companies say. 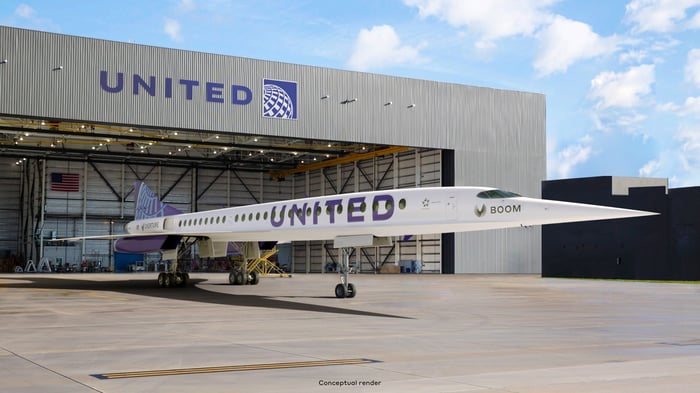 The Overture is set to be produced in 2025, to begin flying in 2026, and to carry passengers by 2029. The companies also said they will work together to accelerate production and increase supplies of sustainable aviation fuel.

The Overture will be capable of flying at Mach 1.7, twice the speed of the fastest planes currently operating. It will allow United customers to fly between Newark and London in just three and a half hours, or San Francisco and Tokyo in six hours.

United CEO Scott Kirby issued a statement saying: "Today's advancements in technology are making it more viable for that to include supersonic planes. Boom's vision for the future of commercial aviation, combined with the industry's most robust route network in the world, will give business and leisure travelers access to a stellar flight experience."