Investors in all three companies can send their thank-you notes to investment bank Morgan Stanley. 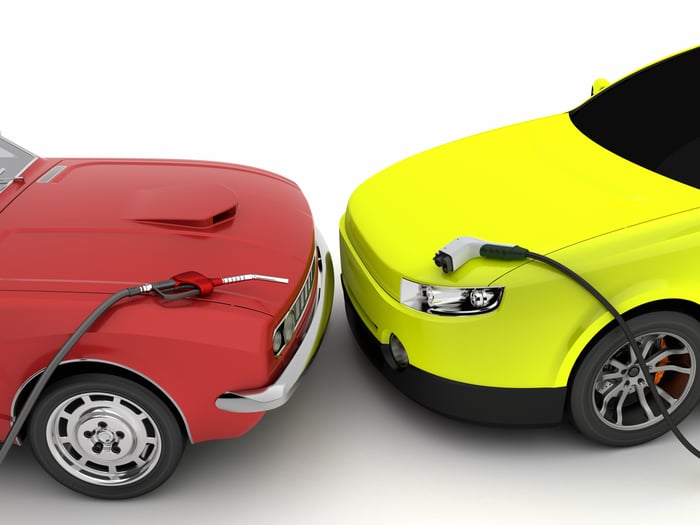 In a note this morning that focused on reiterating the bank's endorsement of Tesla stock, Morgan Stanley pointed out how "the recent increase in oil price significantly improves the payback math" for electric vehicles (EVs). The more gas costs, the more the total cost of ownership rises on internal combustion engine cars that derive their power from burning gas or diesel. Therefore, the more gas costs, the more sense it makes to buy a car that doesn't need gasoline at all.

As explains the bank in a note covered today on StreetInsider.com, "assuming a $5k gap in [the price of an electric car versus a gasoline car], 12k miles of driving per year, 25 mpg, $3/gal gas, 4 miles per KWh on EV and 12 cents per KWh reveals a 4.6 year payback period solving for fuel alone. The same calculation at $2/gallon gas is 8.3 years."

Or stated more simply: If gas continues to cost $3 a gallon as it does (roughly) today, rather than $2 (which it cost last year), you cover the additional cost of buying an electric vehicle, rather than a gasoline car, in less than five years -- rather than this taking more than eight years.

When you consider that the average car buyer today owns a car for only about six years (according to Car and Driver magazine), that's the difference between eventually seeing the savings on your investment in an EV car and not ever seeing the savings.

Thus, continues StreetInsider, the higher price of gasoline today should "have a direct impact on the economic payback period of EVs, influencing desirability" of them to consumers. I can't fault the logic. This is obviously good news for Tesla, and today, investors are extrapolating that it will be good news for rival EV manufacturers Fisker, Arcimoto, and Electrameccanica Vehicles as well.