Please ensure Javascript is enabled for purposes of website accessibility
Log In Help Join The Motley Fool
Free Article Join Over 1 Million Premium Members And Get More In-Depth Stock Guidance and Research
By David Jagielski - Jun 3, 2021 at 7:36AM

The company has already announced three significant transactions in 2021.

HEXO (HEXO 3.53%) has its sights set on being one of the top three cannabis companies in Canada. And to do that, it will likely need to overtake Aurora Cannabis (ACB 7.27%), which has far less revenue than both Tilray and Canopy Growth. HEXO has been wheeling and dealing of late, making moves that will strengthen its top line and put it in a good position to potentially surpass Aurora.

Will that happen as early as this year, and do these transactions make HEXO a better buy, or will they lead to more challenges ahead? Below, I'll look at some of the company's recent moves and what they could mean for its top line. 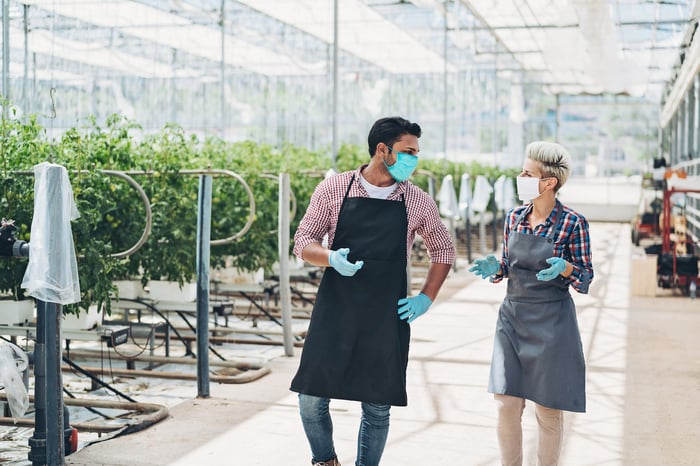 The deals that have been keeping HEXO busy

These are the notable transactions HEXO has entered into thus far in 2021:

In total, that's over CA$1.2 billion in transactions over a period of just over three months. HEXO is serious in its pursuit of becoming a more dominant force in the Canadian cannabis market. But will these deals put its top line higher than Aurora's?

In its most recent results, released on March 18, HEXO reported net revenue of CA$32.9 million for the period ending Jan. 31. If it were to maintain that level of revenue, its annual sales would come in at around CA$132 million. Add in at least CA$75 million in sales from Zenabis and 48North, and that number could climb as high as CA$207 million. While it's unclear how much Redecan may contribute, given that HEXO paid the highest price tag for the business (nearly four times what it did for Zenabis), I would expect that its revenue could potentially be two or three times as large (its profitability likely garners a premium as well). If that's the case, the company's revenue could be in the neighborhood of CA$118 million to CA$177 million. With that, HEXO should be on track to generate at least CA$325 million and potentially as much as CA$384 million. And this is without factoring in any synergetic  growth from these businesses.

Over the trailing 12 months, Aurora has generated just CA$267 million. Even at the low end of the estimate for Redecan, HEXO looks to be in good shape to blow past Aurora's top line. Things can change quickly if Aurora gets into the mergers and acquisitions (M&A) game, but given its focus on profitability of late rather than all-out sales growth, I don't see that as a likely scenario in the near term.

HEXO likely won't overtake Aurora in revenue this year if only because the Redecan deal won't close until the third quarter of 2021. However, once that happens and the company's numbers get included in HEXO's results, that should easily put it over the top and ahead of Aurora.

Do these deals make HEXO a buy?

All of these transactions will make HEXO bigger, but whether they will make the stock a better investment is still a question mark. I'm always hesitant about recommending companies that are aggressive in getting too big too fast. Aurora was aggressive in its early growth days, and now the company is paying for that, having to lay off staff and slash production in an effort to get leaner and closer to profitability. Although HEXO posted positive adjusted EBITDA of CA$202 thousand in its latest earnings report, these recent transactions could make it more difficult for that pattern to continue with all the added expenses that will come along with them.

My concern is that HEXO's bottom line will take a hit in subsequent quarters. If the company gets too deep in the red, the stock could be poised for a sell-off. Year to date, shares of HEXO have doubled and outperformed the Horizons Marijuana Life Sciences ETF, which is up 41% over the same period. But that heightened valuation could make it more vulnerable to a correction. While HEXO may end up being bigger than Aurora next year, it could also end up following in the same dangerous footsteps, which is why I would stay far away from this pot stock.