Please ensure Javascript is enabled for purposes of website accessibility
Log In Help Join The Motley Fool
Free Article Join Over 1 Million Premium Members And Get More In-Depth Stock Guidance and Research
By Courtney Carlsen - Updated Jun 4, 2021 at 11:17AM

The payments company posted a big loss in the quarter, but its partnership with Shopify has me optimistic.

Affirm Holdings (AFRM 0.52%) posted a $247 million net loss in its latest quarter. Since going public on Jan. 13, its stock has fallen 31%. Investors have expressed concern about the fintech company's reliance on Peloton Interactive for a big chunk of revenue, and Affirm has in fact estimated that Peloton's voluntary treadmill recall will cost it millions in potential losses.

Despite this, I think things are looking up for Affirm. The buy-now-pay-later specialist is working toward diversifying its income streams, and its partnership with Shopify should give it a big boost in the coming quarters. Not only that, but the company stands to benefit from the reopening of the economy; many of its travel-industry partners are already seeing increased bookings.

With all this good news, is now the time to buy Affirm?

A large loss in the quarter, but positive signs emerge

In the quarter that ended March 31 (the third quarter of its fiscal 2021), Affirm saw gross merchandise volume (GMV) of $2.3 billion, up 83% from last year. GMV is the total dollar amount of all transactions on the Affirm platform, and is one of the key operating metrics it tracks. Revenue came in at $230 million as a result, up 66.8% from last year. However, operating expenses outpaced revenue growth, increasing 82.1% from last year, resulting in a $247 million loss for the quarter.

The increased operating loss was due largely to $140 million in stock-based compensation following the company's IPO, as well as a $78.5 million adjustment to the fair value of the liability associated with its acquisition of PayBright.

One bright spot in the quarter is that travel was on the rebound. GMV growth in pent-up categories like travel and ticketing grew more than 50% compared to last year. CFO Michael Linford pointed out that travel-related expenses accounted for 11% of Affirm's GMV in the month of April after accounting for just 2% of its GMV in September last year. 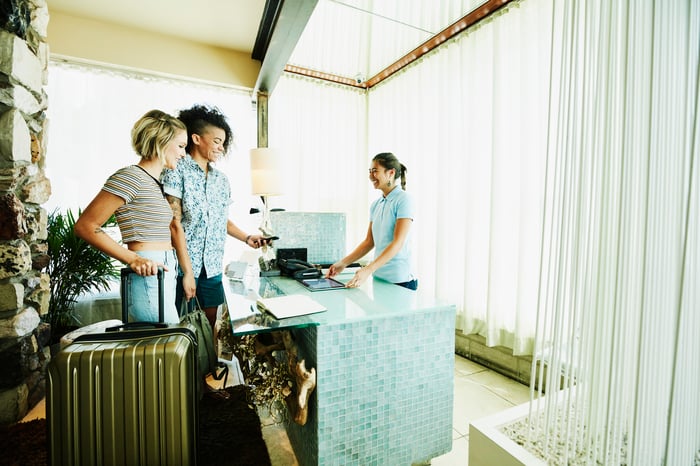 Affirm is in a good position to benefit as travel becomes more commonplace, thanks to its partnerships with Priceline, Expedia, American Airlines, and VRBO. Priceline has said that the partnership allows its customers to book with greater confidence, and that it has reached more millennial and Generation Z customers as a result of its flexible payments options.

A partnership with Shopify should springboard growth

During the quarter, Affirm's earnings included a $3.5 million reduction in total revenue related to the estimated financial impact to Affirm due to Peloton's voluntary recall on its Tread and Tread+ products. Concerns about the safety of the product, which resulted in injuries in children, led Peloton to issue a recall on May 5, offering full refunds in what could cost Peloton $165 million.

Affirm's heavy reliance on Peloton has been a concern, and the company is taking steps to diversify its income sources. One key way it has done so is by partnering with Shopify -- and this is the part of Affirm's story that intrigues me the most.

Affirm partnered with Shopify last July, offering Shop Pay installment options for customers. In February, it had 100 merchants participating in its pilot program, and over 12,500 merchants have gone live with the product as of May. Shopify chose Affirm as a partner because of its speed at converting customers and its ability to offer a scalable payment solution that can keep up with the growth of the Shopify platform.

The company says these payment options will be available to the general population of merchants on Shopify by the end of June, which will significantly expand its merchant base. This is huge for Affirm, as Shopify powers 1.7 million businesses across 175 countries and accounts for 8.6% of e-commerce sales, second to Amazon and ahead of Walmart and eBay. Shopify has grown rapidly, and the COVID-19 pandemic only accelerated its growth. In its first-quarter earnings, Shopify saw revenue of $989 million, up 110% from the same quarter last year, and GMV of $37.3 billion, up 114% from last year.

The partnership with Shopify should be a great one for Affirm, and it has me optimistic about the company's prospects. Shopify posts a GMV that is 16 times that of Affirm, and if Affirm can grab a fraction of this GMV with its payment solution, that would certainly boost its future earnings.

The addition of Returnly could increase sales too

Affirm has expanded its platform in another way by acquiring Returnly, a tech company focused on making returns seamless for customers and merchants. Returnly says it is "the only return solution that lets customers get the right item before returning the wrong one."

Affirm CEO Max Levchin said that the company saw an opportunity, saying Returnly "picks up where Affirm leaves off." Affirm has the front end of transactions down, providing installment options for customers. But when customers would return an item, Affirm would wait until the merchant restocked and refunded the transaction. Returnly allows Affirm to give trusted customers flexibility to shop with its installment options before they box up and return the item.

Affirm ultimately hopes that this accelerates transactions and helps merchants sell inventory quicker. The acquisition of Returnly could be another key piece to Affirm's growth as it works alongside Shopify and other major platforms.

Affirm provided guidance for its upcoming fourth quarter, expecting GMV of $2.20 billion to $2.25 billion and revenue of $215 million to $225 million. It expects to see a smaller operating loss of $50 million to $55 million.

This has some analysts optimistic about Affirm, with Bank of America securities analyst Jason Kupferberg giving the company a buy rating with a price target of $71, a roughly 15% gain from here. If the company's partnership with Shopify pays off, there's no reason Affirm couldn't blow past that price target. The stock is 56% off its high, and I think at this price it's not a bad time to start a position.