The company behind "Grand Theft Auto" is putting serious money behind the $90 billion mobile game market.

The recent spurt of acquisition activity in the video game industry doesn't appear to be slowing down. On June 2, Take-Two Interactive (TTWO -2.52%) announced a $378 million deal to buy Nordeus, a mobile game studio based in Belgrade, Serbia. The deal will be financed with $225 million in cash and $90 million in newly issued shares of Take-Two stock.

The minor dilution to shareholders is likely what caused Take-Two's stock price to sell off by a few percent immediately following the news. However, Take-Two has demonstrated plenty of times in the past that it knows how to allocate capital that ultimately delivers shareholder returns.

Let's look at what Nordeus brings Take-Two and how this deal fits into Take-Two's growth strategy. 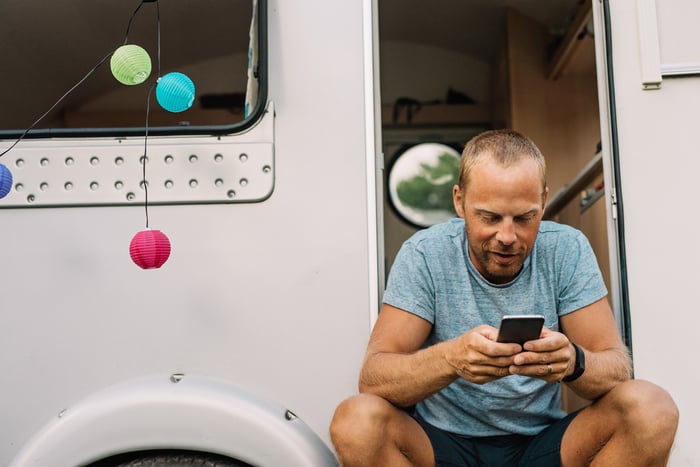 Nordeus is best known for the mobile soccer title Top Eleven, which has over 240 million registered users. The studio was founded in 2010 and gives Take-Two a stronger foothold in Europe, where video game development is a fast-growing field.

It's no secret that mobile gaming has been the fastest-growing category of the video game industry. In 2016, Activision Blizzard acquired King Digital Entertainment, the maker of Candy Crush, for $5.9 billion. Earlier this year, Electronic Arts completed the $2.1 billion acquisition of Glu Mobile.

Take-Two has been quite active over the last four years, acquiring two mobile studios in Socialpoint for $250 million (2017) and Playdots for $192 million (2020). In the fiscal fourth quarter, it acquired HB Studios Multimedia, the maker of its new sports franchise, PGA Tour 2K21, for an undisclosed amount.

But Nordeus might turn out to be the most influenial acquisition yet. The reason is that sports video games have been growing much faster than the rest of the market recently. The total value of sports video games was estimated to be over $11 billion in 2020.

Take-Two is very committed to investing behind the growth in mobile. In a statement, Take-Two's executive vice president Michael Worosz said: "Our investment in Nordeus strengthens further Take-Two's mobile game business, is highly complementary to Social Point and Playdots, and broadens our sports portfolio with our first-ever soccer offerings."

Most importantly, Nordeus appears to have an excellent record of growing its business. "Over the last decade, Top Eleven has grown its audience, revenue, and profitability through Nordeus' introduction of live-ops and ongoing gameplay innovations that continue to drive ongoing consumer engagement," Worosz said.

What is Take-Two's next move?

Why would Take-Two want to do more deals when it is experiencing so much growth in top franchises, such as Grand Theft Auto V, NBA 2K, and Red Dead Redemption 2?

Overall, acquiring a successful studio is an efficient way to expand the talent in the organization, especially as the demand for game developers continues to rise across the industry. For example, Activision recently announced it would hire 2,000 new developers by the end of 2022. At an investor conference in March, Take-Two CEO Strauss Zelnick said: "There's no doubt that the constraint to growth for us is hiring great talent."

This doesn't mean investors should worry about Take-Two throwing good money after bad. Take-Two is not interested in making deals for the sake of growing revenue. During the fiscal Q4 2020 earnings call, Zelnick mentioned the importance of focusing just as much on the bottom line: "Said another way, if you're going to do an acquisition, it has to be smart, it has to be accretive relatively quickly if not immediately."

Take-Two has delivered exceptional returns to shareholders since Zelnick took over as CEO in 2011. The stock has delivered a return of 1,300% since then, beating the S&P 500 index return of 226%. Each move management has made with respect to capital allocation decisions has been one more brick laid on top of a strong foundation for future returns to investors.

Take-Two ended the last quarter with $2.7 billion in cash on its balance sheet and no debt. It also generated $843 million in free cash flow in fiscal 2021.

Investors should watch what Take-Two does with its cash. Zelnick said a year ago that there could be acquisition opportunities coming out of the pandemic, and he was right. Take-Two is exiting the pandemic with plenty of cash to either invest in its pipeline of new titles in development, or find more profitable studios that pad the bottom line and stack its talented ranks to fuel long-term growth.