Please ensure Javascript is enabled for purposes of website accessibility
Log In Help Join The Motley Fool
Free Article Join Over 1 Million Premium Members And Get More In-Depth Stock Guidance and Research
By John Rosevear - Jun 4, 2021 at 10:50AM

Was it Reddit shenanigans, or was it something else?

Shares of several emerging electric-vehicle (EV) companies -- all former highfliers that had faded -- enjoyed a resurgence this past week. There was no big news driving the price action; rather, investors (or at least traders) seemed to be revisiting stocks that had once been favored by Reddit's WallStreetBets group.

All three of these companies' stocks are still down sharply from their 52-week highs, but all had a nice run from the beginning of the week through Thursday's close.

None of these companies had any big news to report this past week -- or any news at all, really. A prominent Wall Street analyst, Adam Jonas of Morgan Stanley, did say positive things in passing about Fisker and QuantumScape (and several other companies in the EV space) in a note released on Tuesday. But it wasn't the kind of thing that you'd expect to serve as a catalyst for these strong upward price moves. 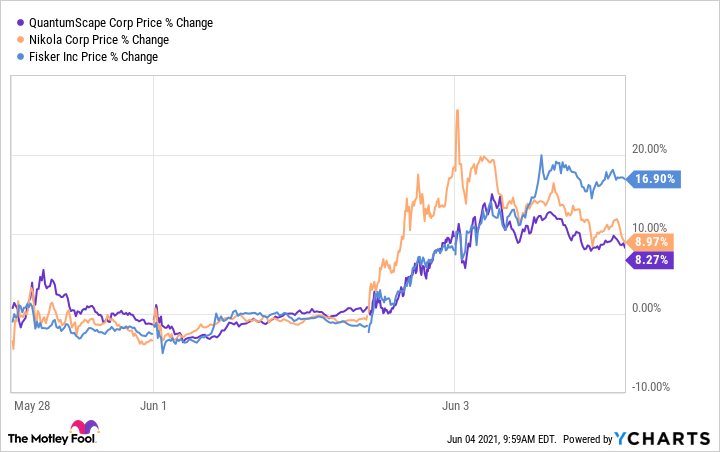 There might have also been some short-squeeze effects at work. A short squeeze occurs when a heavily shorted stock surges higher, leading short-sellers to hurriedly close out (or cover) their short positions by buying stock -- which adds to the pressure pushing the stock price higher.

Some members of WallStreetBets have in the past engaged in coordinated buying of out-of-the-money call options on heavily shorted stocks as a way to trigger or accelerate short squeezes. A call option gives the owner the right to buy shares at a set price at some point in the future. When a dealer sells a call option at a price above the stock's current level, the dealer will usually hedge the transaction by buying shares of the stock. 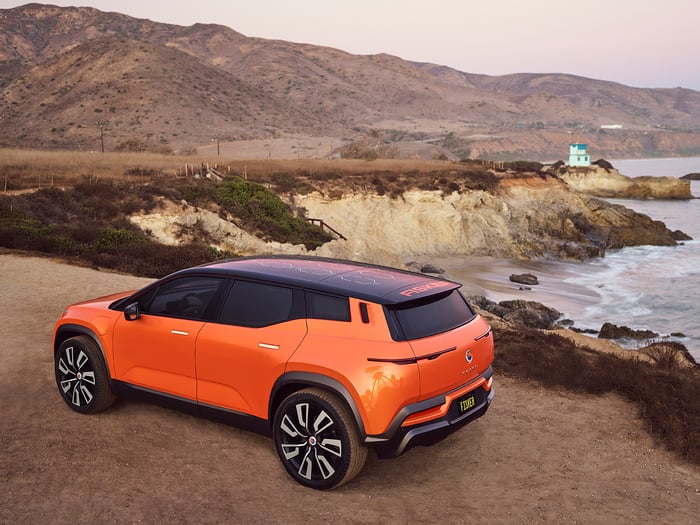 Fisker is on track to launch its electric Ocean SUV late next year, but that's not why the stock was up sharply this past week. Image source: Fisker, Inc.

As WallStreetBets members discovered last year, coordinated buying of out-of-the-money call options can trigger a lot of buying by dealers, in turn triggering or accelerating a short squeeze.

Is that what happened here this past week? It's hard to know. But given the pattern -- that these, and other stocks that made sharp upward moves, were past WallStreetBets favorites -- it seems like the most likely explanation.

As I mentioned above, all three of these stocks are still well below their 52-week highs. Through Thursday's close, Fisker was still down 50% from its high, Nikola was down 82%, and QuantumScape was down 79% from its highest price in the past year.

I think recent moves by the large, established global automakers have poured some cold water on the expectations that auto investors once had for these and similar companies. While all three of these companies still have the potential to grow into good, profitable businesses, none have yet to show investors that they can execute on their grand plans and that they can compete with the incumbent automakers' vast advantages of scale and access to resources.

The takeaway for investors: These companies' stocks are long shots, and this past week's run-up doesn't change that. Invest carefully.