Please ensure Javascript is enabled for purposes of website accessibility
Log In Help Join The Motley Fool
Free Article Join Over 1 Million Premium Members And Get More In-Depth Stock Guidance and Research
By Jeff Little - Jun 5, 2021 at 6:45AM

Cannabis is providing a new lease on life for real estate investment trusts.

As the cannabis rush rolls on in the U.S., companies large and small continue to make moves to become top players and money makers. There are big dreams and plans to cash in on a burgeoning market, whether in cultivation, processing, or dispensaries or as vertically integrated do-it-all businesses.

In July 2019, Power REIT (PW 3.69%) threw its hat in the ring by expanding its focus from transportation and alternative energy real estate to include agriculture real estate aimed at growing food and cannabis. I'm not so sure about the food aspect, but the cannabis greenhouse approach is in full effect. The strategy behind its agriculture plans is based on using controlled environments (greenhouses) to grow crops indoors. As a real estate owner, the company plays the role of landlord, but does not invest directly in cannabis businesses. 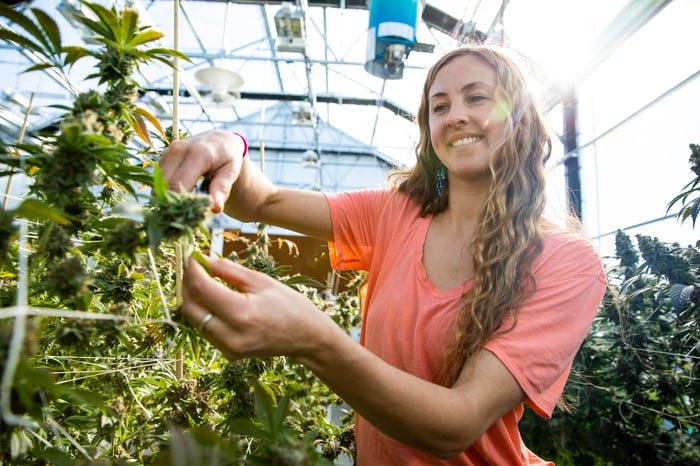 Once its new strategy was in place, Power REIT wasted no time in taking action. The company made the first two of many purchases of properties in Colorado for a combined seven acres, including existing greenhouses and processing facilities, at a total purchase price of $1.78 million. It entered into leases with a tenant on 20-year lease terms that called for $331,000 in annual rent and a structured agreement that results in full recovery of the original investment by month 42. After that point, rent is structured to provide a minimum 12.5% annual return on the original investment.

At the one-year mark after expanding its strategy, the company was making good on its investments. Throughout 2020 it bought additional properties, primarily in southern Colorado, but also in Maine. Revenue didn't take long to grow. By the end of third-quarter 2020, net income per share was up to $0.25 for a 127% quarterly increase year over year, and for the nine months ended in September 2020, Power REIT was reporting an 85% increase in revenue to go along with $0.56 per share in net income. Its controlled environment agriculture greenhouse facilities were up to 10, and it had seven solar farms after a little over a year.

By the end of 2020, full-year revenue had climbed to $4.3 million for a 96% increase over 2019. Net income per share of diluted stock performed even better at a year-over-year growth rate of 184% to come in at $0.96 for the year. Company executives attribute this massive growth to its plan to expand into agricultural real estate investments in the second half of 2019.

The decision to expand the company's strategy into the blooming cannabis market has not only resulted in growing revenue and profits for the company, but has benefited investors as well. In March, the company announced a $0.48 quarterly dividend, equating to a full-year annual dividend payment of $1.94 per share of preferred stock.

Power REIT's creative strategy in the cannabis market has proven successful so far.  Revenue for first-quarter 2021 came in 131% year over year, while net income overshadowed that number, sprouting 419% for the quarter year over year. In total, the company tallied five new facilities in Colorado and California combined during the quarter and picked up an existing lease with a state-licensed cannabis operator.

Looking down the road, the company has planned additional acquisitions, not at the expense of investors. In a comment that should be music to any investor's ears, CEO David Lesser said that the company is "continuing to explore non-dilutive capital sources to fund our growth in an effort to create ongoing shareholder value." Those additional acquisitions start with a recently announced plan to purchase what it calls the largest cannabis cultivation and processing facility in the state of Michigan. The property -- 66 acres large -- will provide 522,000 square feet of space, with plans to add 330,000 square feet, ready for immediate cultivation and revenue generation.

If the company carries out this new acquisition as it has the rest, it will look to form a lease agreement with a tenant for a period of 20 years, with options to append subsequent five-year increments. With the majority of leases set up that way, and yielding a gain of 12.5% on original investment capital, plus yearly increases of 3%, it's set itself up for long-term growth in a burgeoning market. Now it needs interest rates to do their part for investors.

What you should know before you buy

Power REIT has been conquering real estate properties one at a time with its new heavy focus on cannabis greenhouses and processing facilities, resulting in strong growth and net income, along with dividends that can pique the interest of many investors. But before you go dropping a few dollars on a batch of shares, it might be good to make sure you know about the pros and cons of REIT investing, including how interest rates might have an impact.