Please ensure Javascript is enabled for purposes of website accessibility
Log In Help Join The Motley Fool
Free Article Join Over 1 Million Premium Members And Get More In-Depth Stock Guidance and Research
By Keith Speights - Jun 5, 2021 at 6:01AM

You can scoop up both of these solid stocks and still have a little money left over.

When is the best time to start investing? Now. Trading platforms such as Robinhood make it easy to begin investing and don't charge a commission. All you need is some money to get started.

Robinhood even provides a list of the 100 most popular stocks among investors on the platform, which can give you some ideas for where to invest. And you won't need much money to scoop up shares of some of them. If you've got $100, these two Robinhood stocks are great picks to buy right now. 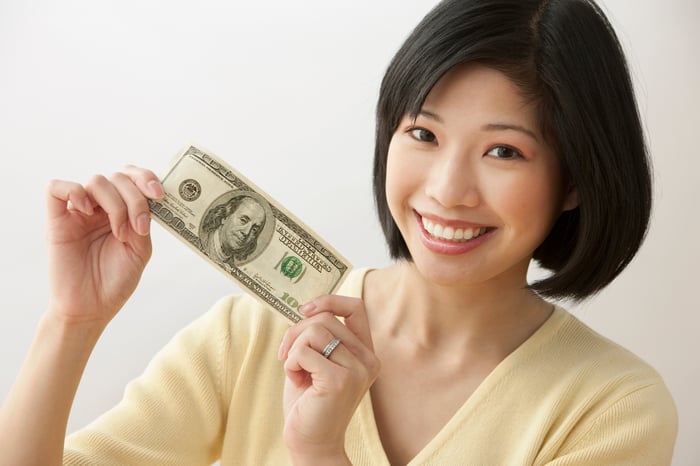 You can currently buy a share of Bank of America (BAC 0.45%) for less than $44. It's the most widely held bank stock among Robinhood investors. It's also Warren Buffett's favorite bank stock.

Don't buy Bank of America just because others like it, though. There are several reasons why the stock is a good choice right now.

For one thing, interest rates are bound to increase in the not-too-distant future. The Federal Reserve Board won't be able to keep rates as low as they are now indefinitely, especially with inflation becoming more of an issue. Bank of America will directly benefit if and when interest rates rise.

A rebounding global economy should also boost the company's fortunes. Increased availability of COVID-19 vaccines has already made a huge difference in the U.S. and hopefully will do so throughout the rest of the world in the coming months. The prospects of a massive infrastructure bill could also fuel a stronger economic recovery. All of this adds up to more lending, which is music to the ears of Bank of America.

Of course, rising interest rates and an improving economy should help most bank stocks. What makes Bank of America stand out from the pack? I'd put diversification of revenue near the top of the list. The financial services giant makes money in multiple ways, including consumer banking, investment banking, and wealth and investment management.

I also like Bank of America's focus on technological innovation. The company has received numerous awards for its digital solutions. It's not just getting accolades from other organizations, though -- Bank of America's customers have significantly increased their usage of the bank's digital products.

Pfizer (PFE 0.34%) currently trades at less than $40 per share. After buying one share of Bank of America, you'd still have enough of your initial $100 to pick up a share of the big drugmaker and still have money left over. Pfizer stands out as one of the very few stocks that could be attractive to growth, income, and value investors.

The company reported 42% year-over-year revenue growth in the first quarter. Earnings soared 44%. Some of this growth was because Pfizer no longer has older drugs that have lost exclusivity weighing it down. Those drugs are now in Viatris' lineup. Viatris was formed in November 2020 with the merger of Mylan with Pfizer's former Upjohn unit.

However, the main growth driver for Pfizer is its COVID-19 vaccine. Sales for the vaccine totaled nearly $3.5 billion in Q1. Pfizer looks for the vaccine to rake in sales of $26 billion this year, and it could generate strong recurring revenue for a long time to come. CEO Albert Bourla predicted last month that "a durable demand from our COVID-19 vaccine, similar to that of the flu vaccines, is a likely outcome."

Income investors will almost certainly like Pfizer's dividend yield of more than 4%. Pfizer had initially expected to cut the dividend once Viatris initiated its own dividend program, but the huge influx of cash from COVID-19 vaccine sales allowed the company to keep its dividend payout unchanged.

You might think that Pfizer, with its strong growth and juicy dividend, would be priced at a premium valuation. That isn't the case. The big pharma stock trades at less than 12 times expected earnings.

My view is that $100 won't be enough to buy shares of both Pfizer and Bank of America for too much longer. If I'm right, the best time to invest in these two popular Robinhood stocks truly is right now.