Please ensure Javascript is enabled for purposes of website accessibility
Log In Help Join The Motley Fool
Free Article Join Over 1 Million Premium Members And Get More In-Depth Stock Guidance and Research
By Keith Speights - Jun 6, 2021 at 5:55AM

The long-term prospects look much brighter for these great companies.

There's a good reason why AMC Entertainment (AMC 7.56%) ranks as the third most popular stock for Robinhood investors. Shares of the theater chain have skyrocketed more than 2,500% so far this year. Most of those gains have come over the last few weeks. 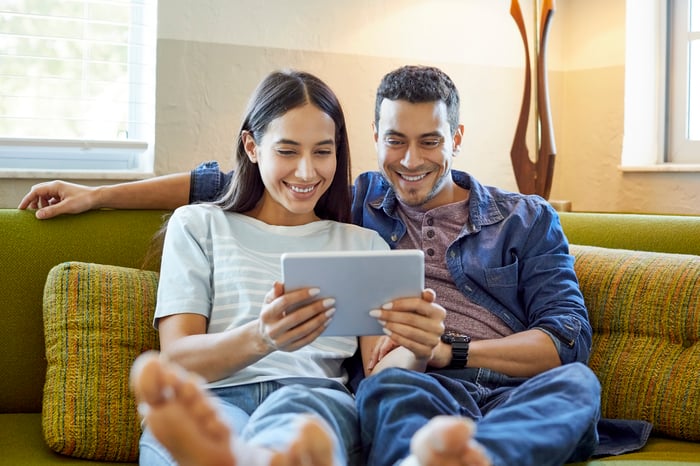 Don't believe for one second that lots of people have thrown in the towel on Facebook (META -0.48%). The social media giant's number of monthly active users has continued to climb, topping 2.85 billion in the first quarter of 2021. Meanwhile, the number of frequent moviegoers -- AMC's prime customers -- was slipping in 2019 before anyone had ever heard of COVID-19.

Facebook is working hard to build a trillion-dollar empire. One key component of this effort is to continue attracting users to its social media platforms so that it can sell more ads. However, the company isn't just focused on social media. CEO Mark Zuckerberg highlighted three areas in Facebook's Q1 update that could be massive growth drivers in the future -- augmented and virtual reality (AR/VR), commerce, and the "creator economy."

The company is already a leader in VR with its Oculus devices. Facebook and Ray-Ban have first-generation AR smart glasses on the way. It's also developing new devices including haptic gloves plus a virtual world called Horizon. Zuckerberg thinks that AR and VR will "unlock a massive amount of value" over time.

As for e-commerce, more than 1 billion people already visit Facebook Marketplace each month. Facebook recently launched Shops, an online storefront platform that has more than 250 million monthly visitors. The company is also developing a platform and tools that support the creator economy, including options for content creators to monetize their offerings.

Moderna (MRNA -1.41%) stands as one of the key reasons why AMC could see its fortunes improve in 2021. The COVID-19 vaccine developed by Moderna has been given to millions of Americans and remains one of only three vaccines to secure U.S. Emergency Use Authorization so far.

As of its Q1 update in early May, Moderna had advanced purchase agreements in place for its COVID-19 vaccine totaling more than $19 billion. Since then, the company has picked up additional supply deals.

Moderna seems likely to make even more money next year than it will in 2021. Beyond 2022, the company anticipates that emerging coronavirus variants will result in the need for annual vaccinations.

But is all of this growth already priced into the biotech stock? Nope. Moderna's shares currently trade at only nine times expected earnings. With plenty of other pipeline candidates based on its messenger RNA technology potentially on the way, Moderna could easily make investors who hold on for the long run much richer.

Like AMC, Square (SQ -3.21%) should directly benefit from the reopening of the U.S. economy. The company's seller ecosystem serves many small and medium-sized businesses that were hurt by the COVID-19 pandemic.

Square will likely be in a position to offer these business customers even more value going forward. It plans to introduce business checking and savings accounts, according to a recent Bloomberg report. This move isn't surprising, as Square hasn't made a secret of its desire to transition into banking services.

The company's biggest growth driver, though, is its Cash App ecosystem. Cash App currently supports a wide range of features, including peer-to-peer payments, a credit card, and buying and selling stocks and Bitcoin.

Probably the biggest knock against Square is its valuation. The stock trades at more than 150 times expected earnings. That valuation is still more attractive than AMC's, though. More importantly, the shift to a cashless society seems unstoppable. Square's growth prospects for both its seller and Cash App ecosystems make a premium price worth paying.