Please ensure Javascript is enabled for purposes of website accessibility
Log In Help Join The Motley Fool
Free Article Join Over 1 Million Premium Members And Get More In-Depth Stock Guidance and Research
By Nicholas Rossolillo, Anders Bylund, and Billy Duberstein - Jun 6, 2021 at 6:30AM

Prices on goods and services are up as the economy reopens, but that's no reason to stop investing.

Inflation has picked up pace this year as effects from the pandemic ease and pent-up consumer demand for certain goods and services gets unleashed. For the record, a little inflation is indicative of a healthy or rebounding economy, so there's no need to panic just yet. But if higher inflation is a more prolonged problem, having some money stashed away in some stocks that can still thrive will be a good move. Three that are worth a look right now are PayPal (PYPL 0.41%), Alphabet (GOOGL 0.33%) (GOOG 0.19%), and Micron Technology (MU -0.52%).

Digital payments could actually flourish in an inflationary environment

Nicholas Rossolillo (PayPal): I started loading up on digital payments stocks early this year in anticipation of higher consumer spending, and I'm still a buyer now that money is flowing through the economy again at a fast pace and causing some spikes in prices. In fact, as long as higher pricing doesn't continue to rise unabated for years, a little inflation would actually be a positive for payment processors like PayPal.

The reason is the digital payments space collects a percentage fee for processing a transaction. If average transaction values increase, the fees paid to companies like PayPal increase as well. Added to the strong and steady growth already expected this year, this could set up PayPal shares for continued success where other stocks might stumble in such an inflationary environment.

Specifically, PayPal is forecasting full-year 2021 revenue growth of about 20%. And since it's reaching a more profitable scale as it expands the reach of its payments and financial technology services network, profitability will likely grow at an even faster rate. For reference, PayPal's free cash flow rose 50% last year on a full-year sales increase of 23%. Talk about inflation beating business growth.

Adding to the case for PayPal, the company ended March 2021 with $13.1 billion in cash and equivalents and another $5.99 billion in long-term investments, offset by debt of just $8.94 billion. This is a rock solid leader in fintech and next-gen banking services, growing at a rate that will far outpace (or even get a small boost from) some inflation. Shares currently value PayPal at 59 times trailing-12-month free cash flow, not so unreasonable given the booming bottom line. Inflation or not, I say this stock is a buy for the long haul. The ABCs of market-leading stability

Anders Bylund (Alphabet): Raging inflation is often a precursor to a sharp correction to the stock market. For example, the U.S. inflation rate stood at 5.6% in the summer of 2008, a multi-year high that was more than double the 2.4% rate seen a year earlier. The financial crisis that followed was the stuff of legend. History doesn't exactly repeat itself but you will often find that it rhymes. The 2008 crisis was primed by reckless investments in subprime mortgages, and today's soaring stock market looks like an over-extended rebound from last year's COVID-19 recession. In other words, the rising inflation rates we see right now could very well be an early sign of the next dramatic correction.

That's why this market tenor makes me want to buy stocks that should survive and thrive when that looming market drop shows up. And if their prices fall in the early days of the next market panic, it should be an easy decision to buy more of them at lower prices.

One of the best ways to stay ahead of galloping inflation and future market crashes is to invest in Alphabet. The Google parent is built to last a lifetime, weathering all sorts of market storms with a shrug, and generate shareholder wealth along the way.

The key to Alphabet's long-term value is found in the company's extreme flexibility. What started as an innovative search engine has grown into a multi-industry conglomerate that dominates key sectors such as smartphones and online advertising services. The company is brewing up a plethora of business ideas like self-driving cars, advanced medical research, and quantum computing. Whatever marketwide sea change comes next, Alphabet will be ready to adapt in a hurry.

Sure, Alphabet's stock tends to get swept up in every recession-defining market crash but the share prices are always quick to recover. It's almost silly how badly Alphabet's twin stocks are beating the broader market in the long haul: 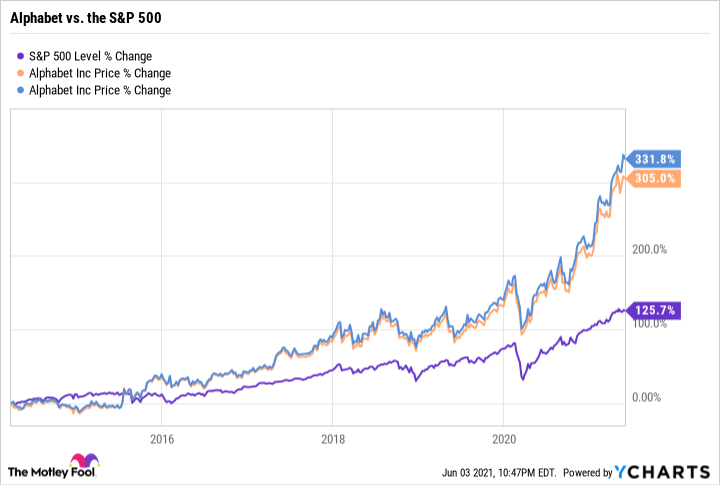 Alphabet's shares can take a licking and keep on ticking. That's a winning quality in the eternal battle between investors and inflation.

Billy Duberstein (Micron Technology): Although discount rates go up with inflation, it's possible for certain types of stocks to do well in inflationary times. These include commodity-related stocks in commodities experiencing the inflation, or companies with enough pricing power that can raise prices.

Micron is the former, as a sort of "technology commodity" company that makes basic DRAM and NAND flash memory components. Unlike proprietary logic chips, such as those made by NVIDIA (NVDA 1.73%), the prices of memory chips fluctuate with global supply and demand, not unlike oil, or steel, or agricultural products.

As is well-known, the world is currently in a severe chip shortage. The 2018-2019 trade war and then the 2020 pandemic have caused chipmakers to cut back on supply, and for chip users to draw down their inventory. But with the pandemic accelerating digital trends, 5G phones coming to market, and the economy roaring back, huge demand is now overwhelming muted supply. Additionally, chip supply can't just be "turned on" at the flip of a switch. Chipmakers need to build fabs and machines, and produce these difficult-to-manufacture tech commodities without defects.

That has caused memory prices to rise this year. DRAM prices were up 8.7% quarter over quarter in the first quarter, and are expected to rise another 18%-23% in Q2.

Thus, it's no surprise that at a recent industry conference, Micron CEO Sanjay Mehrotra said the company's May quarter revenue was likely to be "at or above" the high end of Micron's previous guidance, with "strong earnings." Micron will report its May quarter earnings on June 30.

Yet another reason to be optimistic is that Micron has surged ahead of competitors on leading technology, as the first memory company to produce both 176-layer NAND and the 1-alpha node in DRAM. The company just released a press release highlighting new products based on these advanced nodes for data center servers, intelligent vehicles, and 5G phones and laptops. These products are just hitting the market now, and should be even more profitable for the company in the second half of this year.

While rising inflation and perhaps interest rates may hurt high-multiple stocks, the cyclical Micron only trades at eight times next year's earnings estimates, so it shouldn't be too affected by higher rates. Skeptical investors may be anticipating the end of the cycle that just started, but Micron's improved technology position vis-a-vis competitors should make it more profitable through future cycles. If that's the case, the stock is still a bargain.