Please ensure Javascript is enabled for purposes of website accessibility
Log In Help Join The Motley Fool
Free Article Join Over 1 Million Premium Members And Get More In-Depth Stock Guidance and Research
By Leo Sun - Jun 6, 2021 at 10:00AM

The cloud king just turned in its "best quarter ever" -- but will its impressive growth rates silence the bears?

Salesforce's (CRM -0.22%) stock recently popped after the cloud services company posted its earnings report for the first quarter of fiscal 2022. Its revenue rose 23% year-over-year to $5.96 billion, beating estimates by $70 million, and grew 20% on a constant currency basis. 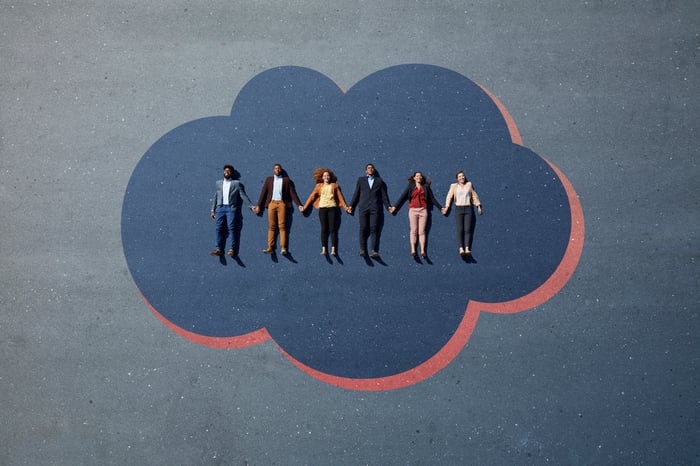 During the conference call, CEO Marc Benioff proclaimed it was the "best quarter Salesforce has ever had." Let's see why Benioff made such a bold statement, and whether or not it's time to buy Salesforce.

Salesforce's revenue growth accelerated from its 20% growth in the fourth quarter of fiscal 2021. It also surpassed its own guidance for about 21% growth, which had already been raised in the fourth quarter. Its revenue increased by the double digits across all four of its core businesses.

It also generated double-digit sales growth across the Americas, EMEA (Europe, Middle East, and Africa), and APAC (Asia-Pacific) regions, even as currency headwinds throttled its growth in several markets.

Salesforce's current remaining performance obligation (CRPO), which represents its expected future revenue from existing contracts over the next 12 months, rose 23% year-over-year to $17.8 billion, which indicates its revenue growth will remain comfortably above 20% for the rest of the year.

That's why Salesforce raised its full-year revenue guidance by $250 million to approximately $26 billion, which would represent 22% growth from 2021. It also reiterated its goal of generating $50 billion in annual revenue by fiscal 2026.

Salesforce's operating cash flow jumped 76% year-over-year to $3.2 billion during the first quarter, while its free cash flow soared 99% to $3.1 billion. It usually generates its strongest cash flow growth in the fourth and first quarters, since that's when it usually collects its annual fees.

Speaking of acquisitions, Salesforce expects to close its takeover of Slack (WORK) in the second quarter. That $27.7 billion acquisition, which includes $26.79 in cash and 0.0776 shares of Salesforce's common stock for each share of Slack, will temporarily reduce its cash flows and earnings this year.

However, integrating Slack's enterprise communication platform into its CRM (customer relationship management) services will likely lock in more users, break down the barriers between its cloud services, and enhance its Customer 360 platform for digitizing customer experiences.

Slack will feed more data into Salesforce's data-crunching Einstein AI platform, and complement its prior acquisitions of the application network provider MuleSoft and the data visualization platform Tableau.

Salesforce controls about a fifth of the global CRM market, according to IDC, while its closest rivals all hold single-digit shares. That market-leading position, along with its expanding ecosystem of services, gives the company tremendous scale and plenty of pricing power.

An attractive balance of growth and value

Salesforce expects its non-GAAP EPS to decline 22%-23% and for its GAAP EPS to plunge about 95%. Those declines, which can mainly be attributed to its takeover of Slack, seem steep -- but Salesforce actually raised both earnings estimates from its previous forecast in the fourth quarter.

Based on these expectations, Salesforce trades at about 54 times forward earnings and eight times this year's sales. Its price-to-earnings ratio might seem steep for a company with declining earnings, but its profits should rebound after it integrates Slack. Meanwhile, its price-to-sales ratio still seems cheap compared to those of other cloud stocks with comparable revenue growth.

Therefore, I believe Salesforce still offers an attractive balance of growth and value in this market, which has been tough for more higher-growth tech stocks trading at frothy valuations. Concerns about Salesforce's near-term profits might weigh down the stock this year, but I believe it will continue climbing over the long term as it marches toward doubling its annual revenue by 2026.