Please ensure Javascript is enabled for purposes of website accessibility
Log In Help Join The Motley Fool
Free Article Join Over 1 Million Premium Members And Get More In-Depth Stock Guidance and Research
By Jennifer Saibil - Jun 6, 2021 at 8:50AM

There were some strong numbers for this retail group, though not every metric showed progress.

The U.S. economy has continued to see encouraging signs of recovery over the past few months as vaccines have been rolled out and more of the populace has begun to return from pandemic-induced self-isolation. Many retailers that were devastated by store closures are seeing strengthening sales, and some are even surpassing their pre-pandemic sales levels.

Gap (GPS -6.43%), one of the largest U.S. apparel companies, had some serious sales drops in 2020 and was in danger of needing to file for Chapter 11 bankruptcy protection. But the retail group (it also owns and operates the Old Navy, Banana Republic, Athleta, and Intermix brands) been making incremental progress over the past few quarters and posted a standout first-quarter earnings report in late May. 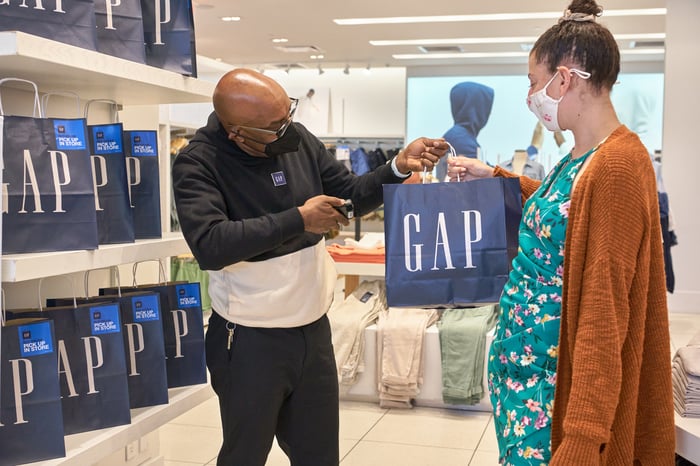 Some winners and some losers

As usual, the Old Navy and Athleta brands did the heavy lifting, while the Gap and Banana Republic brands continued to suffer. Old Navy sales increased 27% over 2019 levels, and Athleta increased 56%. Together they accounted for 66% of total sales, and the company has plans in place to bring that up to 70% by 2023.

The Gap brand has been declining for years, and that didn't change even in a mostly great report. Gap brand sales decreased 16% over 2019 levels, dragging down total company sales. Roughly 11 percentage points of that drop, however, came from store closures, which is a sign of progress. On a positive note, North American comps increased 9% on a stacked two-year basis. Banana Republic was still the biggest loser, with a 22% comps decrease over 2019 numbers.

The company raised its outlook to low-to-mid-twenties percentage sales growth for the full fiscal 2021 and $1.55 to $1.70 in earnings per share.

How to deal with problems that won't go away

Old Navy is back to growth and Athleta is keeping up its growth streak, but Gap has the same problem brands that have been plaguing it for years, and no real path forward. The company made more headway in its plan to close 350 Gap and Banana Republic locations by 2023, 75% of them by the end of 2021.

CEO Sonia Syngal said that the company is seeing success with "purpose-led marketing" and creative brand partnerships, and this is a strategy that it is pursuing with the Gap brand. It is launching a collection called Yeezy in collaboration with Kanye West, and it also announced its first-ever home collection together with retail giant Walmart (WMT -0.08%). Banana Republic's Prep Curry capsule collection largely sold out within a week, and Gap sees these collaborations as a key strategy for the future. There's also new management at Banana Republic searching for a way to become more relevant. But in the meantime, both of these brands are still floundering.

The company's strength is in its digital channels. Digital sales increased 61% year over year in Q1 and accounted for 40% of total sales, even though stores were mostly open in the quarter. Gap has always had a large set of omnichannel options, and that became more important during the pandemic. Customers also gravitated toward its activewear and fleece, and so far those trends continue. If the company can stay on-trend, rather than pumping out its basics regardless of the shopping environment, it can continue to achieve success.

At this point, things are looking up for the company. That might mean it's time to buy -- and keep in mind that Gap stock price has already gained nearly 228% from 52-week lows. That suggests significant investor confidence to go along with increased consumer confidence. And even at the current stock price, Gap stock is not overvalued, trading at 22 times forward one-year earnings.

With a strong quarter and future potential, Gap may be a rare turnaround story in the retail space these days and it deserves further consideration.