The virtual healthcare leader's first-quarter revenue growth was strong, but its earnings disappointed some investors.

Shares of telehealth leader Teladoc Health (TDOC 0.24%) fell 12.6% in May, according to data from S&P Global Market Intelligence. The prime catalyst behind the decline was the company's release of first-quarter results in late April that disappointed some investors.

In 2021, shares of Teladoc are struggling. They're down 26.6% through Friday, June 4, while the broader market has returned 13.4% over this period. (A stock chart follows.) In 2020, the stock gained 139%, thanks to a brisk tailwind from the COVID-19 pandemic. That performance made it one of the year's best-performing large-cap stocks, which are stocks with market caps of at least $10 billion. We can attribute Teladoc stock's weak performance last month largely to its first-quarter earnings missing the Wall Street consensus estimate and the fallout from that event.

Following the company's April 28 release of its first-quarter results, shares of Teladoc dropped in late April and into early May. The initial decline was exasperated by a couple Wall Street analysts lowering their price target for the stock. Putting some numbers next to this dynamic, on April 29 -- the day after earnings were released -- the stock fell 8.3%. By the end of the first week of May, the stock's post-earnings loss was 18.9%. The stock recouped a little of its monthly loss at the end of the month.

In the first quarter, Teladoc's revenue soared 151% year over year to $453.7 million, which edged by the approximately $452 million analysts were expecting and came in near the high end of the company's guidance range of $445 million to $455 million.

Revenue got a boost from the company's acquisitions of Livongo Health and InTouch Health, both of which occurred during the last year. Organic revenue, which excludes the effects of these acquisitions, was up 69%. Certainly, that's still strong growth.

A big chunk of the net loss was due to a non-cash income tax charge of $87.0 million, or $0.57 per share, associated with the company's acquisition of Livongo. 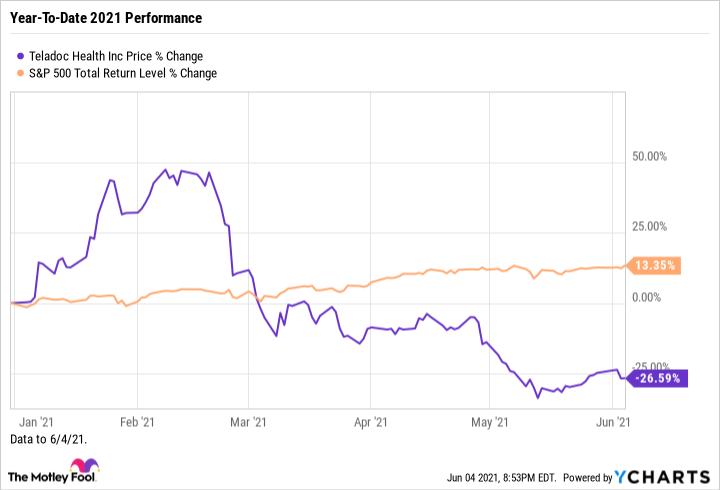 For the second quarter, management guided for revenue between $495 million and $505 million. This represents growth of 105% to 110% year over year.

Is Teladoc stock's recent pullback a buying opportunity? Yes, according to my colleague Sean Williams, who recently called it one of three growth stocks to buy in June.