The famously proprietary company is freeing its video communications app.

FaceTime, the durable and popular Apple (AAPL 0.08%) video communications app, is about to leap out of the company's ecosystem. On Monday, the opening day of this year's edition of the company's Worldwide Developer Conference (WWDC), it announced it is making FaceTime available on non-Apple devices.

This will allow users of PCs and tablets powered by Microsoft's operating system, in addition to those with devices using Alphabet's Android, to utilize the service.

To participate in FaceTime calls and conferences, such users can join on their devices using a dedicated and unique Web link -- as long as they have installed the latest versions of Alphabet's Chrome browser, or the Microsoft equivalent, Edge. 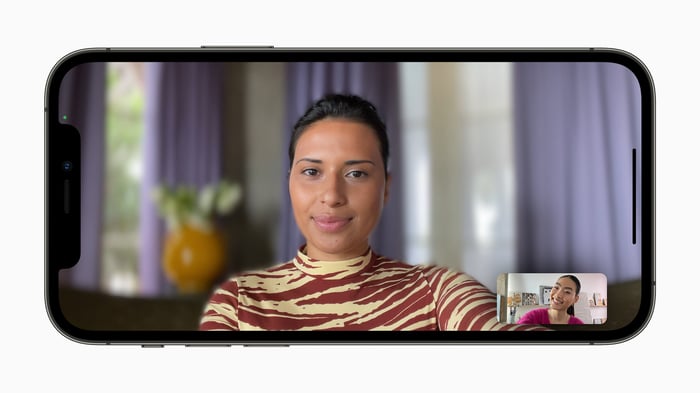 The broadening of FaceTime availability was among a large set of Apple announcements at the conference, an annual event in which it trots out its latest innovations.

It also comes at a time when competing video conferencing apps, most notably that of Zoom Video Communications (ZM 0.04%) have risen sharply in popularity. Apple had little to gain and much to lose by keeping FaceTime proprietary. After all, Zoom and many similar apps are widely available to users of almost any modern device with a recent-model operating system and browser.

FaceTime is a solid app that is very good at what it does. We shouldn't imagine that it'll take large chunks of share from Zoom, however, as a great many users -- even occasional ones -- are used to the latter service's functionality, and as such it has become something of a standard. Still, Apple should get some credit for being flexible, and willing to change with the times when and if necessary.

On Monday, Apple basically traded sideways, only slightly beating the incremental decline of the S&P 500 index.