Please ensure Javascript is enabled for purposes of website accessibility
Log In Help Join The Motley Fool
Free Article Join Over 1 Million Premium Members And Get More In-Depth Stock Guidance and Research
By John Ballard - Jun 7, 2021 at 7:52AM

Activision has a great track record of making lucrative deals on behalf of shareholders.

With an adjusted operating margin above 40%, Activision Blizzard (ATVI 0.35%) is one of the most profitable companies in the world. Over the last four quarters, it generated $2.87 billion in free cash flow and ended the first quarter with $9.3 billion in cash on its balance sheet.

During the first-quarter earnings call in May, one analyst asked management about its plans with respect to mergers and acquisitions (M&A), especially since Activision's peers have been active in making deals lately. Management's response provided valuable insights on its approach toward capital allocation.

Let's look at what they had to say and what investors should expect.

As part of our business strategy, from time to time, we acquire, make investments in, or enter into strategic alliances and joint ventures with, complementary businesses.

Video game companies of all types and sizes have been using acquisitions to expand their content lineup, grow their installed base of active players, and bring in more talent to make games.

It's been a busy year of deal-making. Last year, Microsoft seemed to kick things off with the monster acquisition of Bethesda Softworks owner ZeniMax Media for $7.5 billion. Of course, mobile operator Zynga has been very active over the years, buying small game studios to build its empire in the mobile space. Electronic Arts recently made a bold move by scooping up Codemasters and Glu Mobile for a combined $3.2 billion.

Activision's last acquisition was King Digital Entertainment in 2016 for $5.9 billion, and it has spent the last four years paying down the debt that financed that deal. At the end of the first quarter of 2021, Activision had a net cash position of $5.7 billion.

We have a very strong track record of being balanced and disciplined in how we allocate capital across investing into organic business growth, returning capital to shareholders via buybacks and dividends, as well as strategic M&A. ... And on M&A specifically, we have completed several transactions that have created significant value.

Let's look at these transactions. 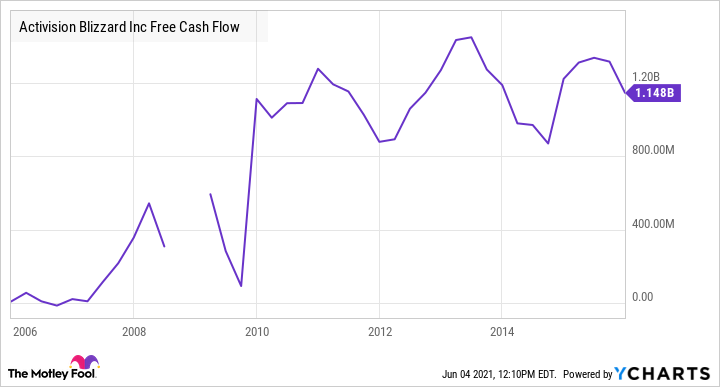 Again, in 2013, management repurchased $5.83 billion worth of shares held by Vivendi, reducing the total shares outstanding, which had the intended effect of boosting the stock price. Since July 25, 2013, when the share repurchase was complete, Activision's share price has soared 539%. 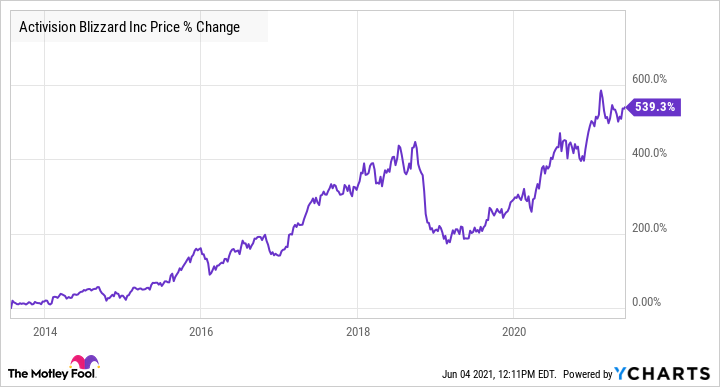 Zerza explained: "We mentioned today that we just celebrated the fifth anniversary of [King's] acquisition, which gave us a leadership position in mobile at a valuation that delivers significant value for our shareholders."

The deal has been very profitable for Activision Blizzard. In 2020, King produced an operating profit of $857 million. Comparing that to the acquisition price of $5.9 billion, that's a valuation multiple of 6.9, which looks like a bargain.

Another way to see the value here is evaluating the payback period on the acquisition price.

Since 2016, King's cumulative operating profit totals $3.58 billion, or 60% of Activision's $5.9 billion purchase price. That's not a bad return on investment so far.

This confirms what Zerza mentioned on the Q1 earnings call, which is that the company looks for large established franchises or technologies, in King's case the popular Candy Crush franchise, that have the potential for growth. "And then, of course, we look for an attractive valuation that hits our return thresholds," Zerza explained.

These are great insights into management's thinking when it comes to acquisitions. If Activision announces a deal at some point, investors should check to make sure the acquired company meshes well with Activision's culture and -- this is very important -- that the deal is accretive to Activision's profitability.

However, it's possible Activision could remain on the sidelines with respect to M&A. Zerza emphasized that management can afford to stay disciplined, given the "significant organic growth opportunities" the company has with Activision Blizzard's game development pipeline.