Please ensure Javascript is enabled for purposes of website accessibility
Log In Help Join The Motley Fool
Free Article Join Over 1 Million Premium Members And Get More In-Depth Stock Guidance and Research
By Keith Speights - Jun 8, 2021 at 5:55AM

It's proved to be a riskier bet for investors so far.

Whatever you think about Dogecoin (DOGE -9.34%), it's been a huge winner this year. The price of the popular cryptocurrency has skyrocketed more than 6,400%. That return trounces even the best-performing stocks that are currently popular on Robinhood.

But Dogecoin proponents and opponents alike would also probably agree that the cryptocurrency is risky. Some traders who bought at the peak price a few weeks ago are now sitting on a 45% loss.

This cryptocurrency isn't the only investment alternative that exposes buyers to the potential for huge losses, though. Here's one popular Robinhood stock that could be even riskier than Dogecoin. 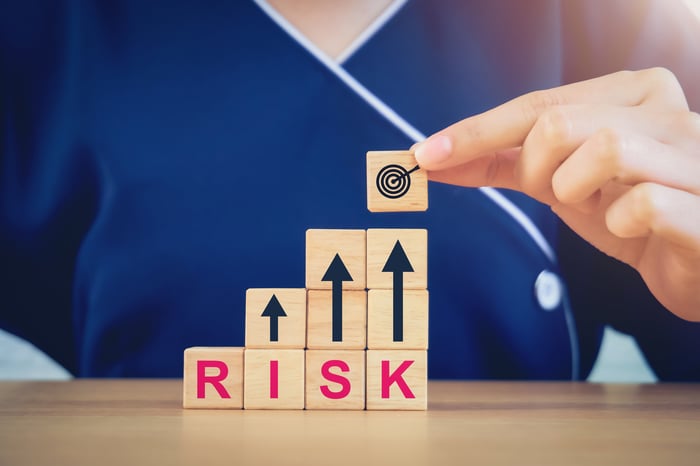 At least one of the most widely held stocks among Robinhood investors has fallen harder this year than Dogecoin. Aurora Cannabis (ACB -4.62%) shares currently trade at more than 50% below its peak level set in February.

However, the full story is much worse for Aurora. The marijuana stock has lost more than 90% of its value since early 2018.

At one point, Aurora ranked as the biggest cannabis producer in the world based on market cap. Reports even surfaced that Coca-Cola was considering teaming up with the company to develop cannabis-infused beverages. All of that seems like ancient history now, though.

While several of its rivals in the Canadian cannabis market landed big partners, Aurora has yet to strike a deal with a major player in the consumer packaged goods industry. And the company isn't anywhere close to being the biggest cannabis producer in the world now. It barely makes the top five among Canadian companies and could easily lose its spot among the top 10 biggest North American cannabis companies.

What makes Aurora so risky

You could make the argument, though, that Aurora is actually less risky now that it's only a shadow of its former self. To some degree, that's true. However, there are still several major risks that the company faces.

Aurora's biggest problem is that it continues to lose a lot of money. In the company's third-quarter results announced in May, Aurora posted a net loss from continuing operations of $165.7 million Canadian. In the past, Aurora has stated that it was on track to generate positive adjusted earnings before interest, taxes, depreciation, and amortization (EBITDA). That goal still hasn't been met.

Because it remains unprofitable, Aurora has to resort to stock offerings to raise more cash. These offerings, though, cause dilution in the value of existing shares. Less than a week after reporting its Q3 results, Aurora filed a prospectus supplement that set up a new at-the-market equity program. This program allows the company to sell up to $300 million of shares. More dilution is on the way.

Aurora's situation would be better if its financial results were improving, but they're not. The company sales fell 25% year over year in Q3 with its consumer cannabis revenue plunging 53%. Competition in the Canadian market is fierce with intense pricing pressure.

The company has its target set on the U.S. cannabis market. For now, though, Aurora can't enter the U.S. market and list its shares on a major U.S. stock exchange because of federal marijuana laws.

Does Aurora have any advantages over Dogecoin? Actually, yes -- and it's a significant one: The struggling cannabis producer has more control over its future than Dogecoin does.

Like most cryptocurrencies, Dogecoin's valuation depends solely on buyers' whims. It has no value in and of itself. There isn't a board of directors and a management team working every day to figure out ways to boost Dogecoin's price (unless you want to count self-proclaimed "Dogefather" Elon Musk's tweets).

On the other hand, Aurora does have a board and executives developing and implementing strategies to improve the company's fortunes. They've cut costs. They're looking at potential acquisitions. Maybe these efforts will work; maybe they won't. However, unlike Dogecoin, Aurora isn't totally at the mercy of outside forces.

Despite this advantage, it's still possible that Aurora will be a riskier bet going forward than Dogecoin will be. The good news for investors, though, is that you don't have to accept any level of risk that you're not comfortable with. There are plenty of other investment alternatives that offer better risk-reward propositions than either Aurora Cannabis or Dogecoin.