This market leader has been the best performer among its peers for more than a decade.

A stock that's considered low-risk has a few particular qualities. The company it represents is typically large and established, a market leader with a durable competitive advantage. It's also the type of business that has a lot of liquidity and is built to weather the most severe downturns.

We've just come through one of the most severe downturns ever during the initial stages of the pandemic, so investors have had a perfect testing ground for financial stability. One company that passed with flying colors is JPMorgan Chase (JPM -0.84%), the nation's largest bank. Here is why this low-risk stock is a long-term winner.

Why JPMorgan has been the best big bank stock

You have to look no further than JPMorgan's long-term performance to understand how it has stood out among its competitors. It's one of the best-performing bank stocks overall over the past several years, and the best among the megabanks. 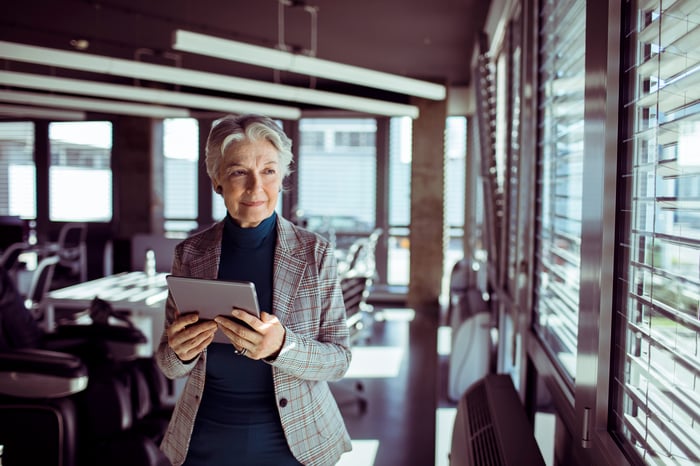 The reasons why JPMorgan Chase has outperformed the competition are the same reasons that it beat out the other banks during the pandemic. Last year, the worst for banks since the Great Recession, JPMorgan Chase was only down 5.5% for the year while all of its large bank competitors were down double-digits, some as high as 40%.

JPMorgan outperformed because of its efficiency, rock-solid balance sheet, and diversification of revenue. To use two key measures of a bank's performance, it has an efficiency ratio of 58% and a return on equity of 19%, both of which are the best of the big four banks.

Also, the company is known for its "fortress" balance sheet, which allowed it to perform comparatively better during the last two major stock market crashes. As of the first quarter, it had $1.5 trillion in available liquidity, $206 billion in common equity tier 1 capital -- for a ratio of 13.7%, which is the highest among its peers -- and 8% growth year over year in book value per share. These are all measures of the company's capital strength, which has allowed it to continue to invest and operate, particularly during these difficult market periods.

The other advantage JPMorgan has is its diverse and robust revenue streams. While it is the largest bank, it also is among the leaders in investment banking, asset and wealth management, and commercial banking. This year, the traditional consumer banking business has come back strong, but last year, when consumer banking struggled, investment banking revenue surged as market volatility led to a spike in trading as well as advisory and underwriting services.

Why JPMorgan Chase is a low-risk winner

All of these factors help make JPMorgan Chase a low-risk stock. It is the undisputed market leader in banking and financial services with a long-term track record of outperformance. And during the worst of times, it has shown its strength. Over the last 15 years, dating back to 2006, before the Great Recession, it has posted an average annual earnings increase of almost 12%. While most banks tend to be somewhat cyclical, based on the strength of the economy, JPMorgan Chase has been much steadier than the others due to its focus on the balance sheet and its diversity of revenue.

Another sign of that stability is its excellent quarterly dividend of $0.90 per share, which has increased in each of the past eight years. At Tuesday morning's prices, it offers a yield of 2.2%, which is above average, and a payout ratio of 27%, which means its dividends make up only 27% of earnings.

JPMorgan's stock price is up 30% year to date in 2021, riding a bank resurgence due to the growing economy and stimulus money. But it remains a solid value with a price-to-earnings ratio of around 13 and a price-to-book value of around 2. Banks have likely come through the worst of the pandemic and should be a solid sector in general moving forward, but JPMorgan, in particular, is poised to be among the leaders, as it has been for a long time now.