Please ensure Javascript is enabled for purposes of website accessibility
Log In Help Join The Motley Fool
Free Article Join Over 1 Million Premium Members And Get More In-Depth Stock Guidance and Research
By Rich Duprey - Jun 8, 2021 at 6:30AM

Long-term investors could be rewarded by the combination of opportunities these three stocks offer.

While traders from the WallStreetBets subreddit may be rallying around meme stocks again sending values soaring, more sober investors are looking for businesses where they can park their money for long-term returns.

If you have $1,000 to invest right now, the three stocks below offer you the opportunity of growth, income, and a discount. It's a combination tough to beat. 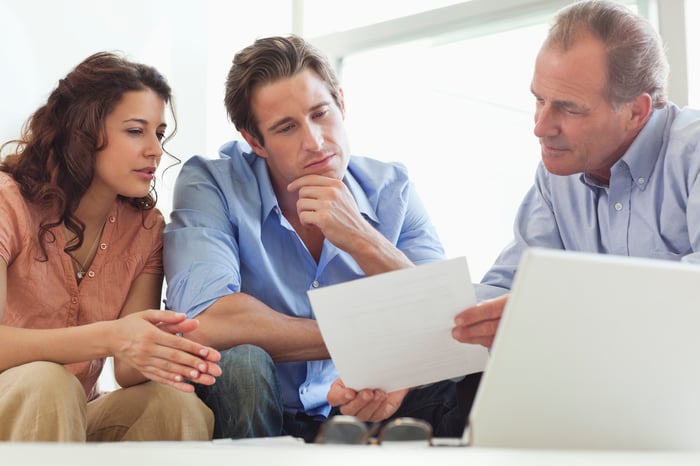 There were a handful of companies that became vital to surviving the pandemic last year: Amazon.com, for when you couldn't go shopping at a store; Walmart, for when you could; and Clorox (CLX 1.22%), because you wanted to keep surfaces and yourself clean and sanitized.

Yet since peaking last August at $240 per share -- right after posting its largest fiscal year sales increase "in modern history" -- Clorox stock has been on a steady downward slide, losing some 25% of its value. Some analysts think it's because it, and other big consumer staples stocks like Colgate-Palmolive and Kimberly Clark, suffered long-term harm from smaller players stealing market share.

Yet that gives investors a chance to buy Clorox at the level it traded at before the pandemic struck, with a portfolio of leading brands across a range of household goods including Kingsford charcoal, Brita water filters, Burt's Bees balms and lotions, and Glad trash bags.

Clorox has also consistently rewarded shareholders by paying a dividend for over 50 years and has raised the payout every year since 1977, making it a Dividend Aristocrat and a stock to consider buying now.

For all the success Johnson & Johnson (JNJ -1.10%) achieved from developing a COVID-19 vaccine, it hasn't been a smooth ride up. From 15 million doses becoming contaminated to a "pause" in the vaccine's administration after a couple of people reportedly developed blood clots after receiving the shot, it's been two steps forward, one step back for the pharmaceutical giant.

And then just last week, the Supreme Court refused to hear an appeal from J&J over a $2.1 billion jury award that its baby talc allegedly caused cancer.

Although its stock remains 5% higher than where it started the year, it's come in fits and starts as each new setback sends shares lower.

Fortunately, Johnson & Johnson has a large portfolio of drugs that generated over $45 billion in revenue last year, an 8% increase from the year before, but growth is accelerating with segment sales 10% higher in the first quarter. It also has numerous therapies in development that could turn into substantial drugs in their own right.

The pharmaceutical trades at less than 16 times next year's earnings estimates though there is substantial opportunity for more growth, while long-term investors should also be rewarded in the meantime by its dividend of $4.24 per share currently yielding 2.6% annually. J&J's made the payout for decades and raised it every year for almost 60 years, making it an excellent stock to consider for your next investment.

Firearms manufacturer Smith & Wesson Brands (SWBI 1.08%) offers investors the biggest discount of all, trading at less than 10 times next year's earnings estimates and under four times the free cash flow it produces, a bargain basement valuation.

While the iconic gunmaker doesn't often trade at a premium to its cash flows, this is cheap even for it, and it is during an unprecedented boom in firearms sales.

The FBI just reported it conducted 3.2 million criminal background checks on potential gun buyers in May, the highest amount ever for the month. With over 19 million checks performed already this year, it's almost the same number of investigations performed for all over 2012, and is running 20% ahead of last year when a record 39.7 million checks were done.

That's translating into record sales for Smith & Wesson, one of the two biggest gunmakers in the country with Sturm, Ruger. Fiscal third quarter net sales of $258 million were the highest even in a quarter for the gunsmith, and marked the third straight quarter of record revenue. Net income of over $62 million was also the highest ever.

Its sales growth also outpaced the increase in background checks showing its firearms are very much in demand. It's used that financial strength to eliminate all long-term debt and begin paying investors a dividend of $0.20 per share that yields about 1% annually.

A combination of innovative new products, a desire for personal protection, and a fear of more restrictive gun legislation seems to be fueling this meteoric rise, which shows no sign of abating. It makes Smith & Wesson Brands a stock that every investor should look at more closely now.