Not only does it look like banks have made more holistic relationships with new deposit customers, but deposit pricing tends to lag interest rate hikes.

Deposits in the U.S. banking system climbed steadily through much of 2019, but once the pandemic hit, they flooded the system to never-before-seen levels. Much of that can be attributed to investors rotating into cash in order to escape riskier assets during the pandemic, as well as Americans saving more when there wasn't as much to do. Trillions of dollars in stimulus from the federal government only drove up deposits more.

With the effects of the pandemic lessening around the U.S. and gross domestic product expected to grow 7% this year, many analysts and investors are trying to gauge how sticky the huge influx of deposits will be once spending picks up, and if the money will be removed as quickly as it came in. But there's good reason to believe that the excess liquidity could be here to stay for some time. Here's why.

Will stimulus deposits stick around?

Banks have seen an extraordinary amount of deposits come into the banking system -- there was roughly $17.09 trillion of deposits sitting in U.S. commercial banks as of May 26.

Part of that is likely due to the trillions of dollars in stimulus from the federal government, along with the fact that the U.S. personal savings rate hit roughly 33% in early 2020 and roughly 28% in early 2021. Additionally, through quantitative easing, the Federal Reserve has been buying all sorts of assets (such as certain securities to keep rates lower) and increasing the money supply, which has also contributed to the excess deposits, particularly at the larger banks.

The big question is, how much of this money will stick around now that things are beginning to normalize? It's hard to know for sure, but deposits have remained high as customers have begun to deplete stimulus funds.

Wells Fargo CEO Charlie Scharf said at a recent conference that of the roughly $48 billion that flowed into consumer bank accounts during rounds two and three of the stimulus, about two-thirds has been spent. Bank of America CEO Brian Moynihan also recently said that consumers have spent roughly 30% to 35% of stimulus money, so there's some evidence that elevated deposit levels may not be strictly tied to the stimulus.

Banking is a relationship business, and banks are always trying to serve the customer in more ways by cross-selling other products, so what might have started as a deposit relationship could have translated into a mortgage relationship or wealth management. Banks also met lots of new business customers through the Paycheck Protection Program and were able to convert them into full banking relationships. While I'm sure a decline in current deposit levels is inevitable, I think levels will stay high for a while relative to where they were pre-pandemic. 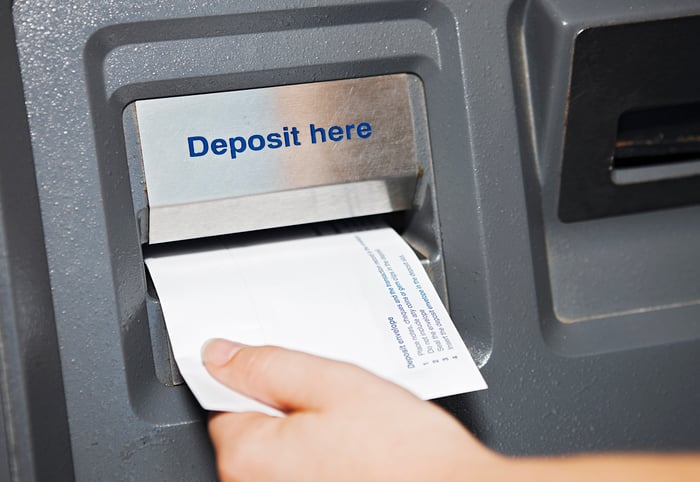 The relationship between interest rates and deposits

Another event that will test the stickiness of deposits is when the Federal Reserve raises its benchmark federal funds rate, which impacts the interest banks charge on loans and pay out on deposits. Depending on your thoughts on inflation, the Fed will likely raise rates in 2022, 2023, or 2024 -- not exactly a precise timeline.

The good news is that pricing on deposits tends to lag rate increases, so it's not like as soon as the Fed raises rates, deposit costs will immediately go up. Banks start to raise the interest they pay on deposits when they're worried about deposits leaving the bank to find better yield elsewhere. The pricing of deposits tends to lag higher interest rates because, in general, banks believe that many customers will not leave at the first sign of a rate increase.

There are certainly some types of deposits -- such as municipal deposits -- that are very rate-sensitive, but low-cost consumer deposits tend to stay put for a while. JPMorgan Chase COO Gordon Smith recently provided some good insight on what happened the last time rates began to rise around 2016 and 2017:

If we look back at the prior cycle, we saw rates rise, they rose about 175 basis points (1.75%) before we had to start to move pricing. That was enormous. Would it be true in the future? Perhaps not precisely, but the -- I think the likelihood is that we will be able to see rates moving and pricing remaining relatively stable for at least some period into the equivalent of that 175 basis points.

That's certainly significant, and if you compare deposit costs at JPMorgan, America's largest bank by assets, to the federal funds rate, you can clearly see that deposit pricing moves slower than Fed's rate hikes.

High-quality deposits allow banks to fund loan growth in a rising-rate environment and increase their profit margins because deposit pricing stays low and loan yields rise. The good news is due to the lag between deposits and interest rates. Even if the Fed were to raise rates in 2022, it could still be a while before deposits are impacted.

Also, while I agree with Smith that deposits may leave more quickly in this next upcoming rate cycle, due to the amount in the banking system and the reason they're there, some banks may be OK to let some deposits leave. For instance, JPMorgan has grown deposits by more than $700 billion between the end of 2019 and the end of the first quarter of this year.

The bank has many more deposits than it can realistically deploy in the foreseeable future, and deposit growth has actually turned into a regulatory issue for JPMorgan, so the bank may be OK to let some more rate-sensitive deposits leave the bank before increasing pricing. Either way, pay close attention to which banks can maintain their deposits and keep their deposit pricing down when rates rise because those will be the banks to invest in.