Failing to recover from their 20% decline in April, shares of Clean Energy Fuels (CLNE 6.71%) dropped 28% last month, according to data from S&P Global Market Intelligence.

Despite an April announcement of a major deal with Amazon, investors didn't seem impressed, continuing to exhibit a lack of enthusiasm into May. But that wasn't the only factor figuring into the stock's decline; investors also seemed unenthused with the company's Q1 2021 earnings report, which was released on May 6, as well as the company's guidance for 2021. 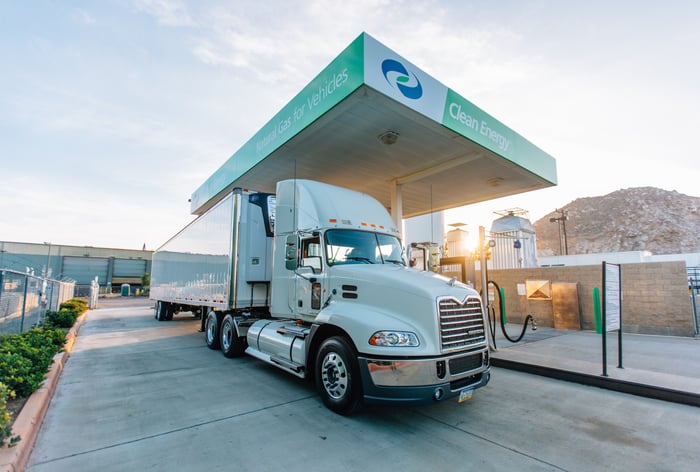 Although Clean Energy Fuels slightly beat analysts' revenue expectations for the first quarter of 2021, it wasn't enough to cheer up investors who were disappointed with the company's performance. For one, the company reported that it delivered 92.4 million gallons of fuel in the quarter, representing a 7% year-over-year decline. Addressing the inferior performance, the company stated in a press release that "This decrease was principally from the continuing effects of COVID-19, primarily affecting the airports and public transit customer markets."

The lower fuel deliveries translated to a shrinking of revenue. Coming up short of the $86 million in revenue that it booked during the same period last year, Clean Energy Fuels reported $77.1 million in the recently completed quarter. Besides diminishing fuel deliveries and sales, the company also reported lower net income compared. Last quarter, Clean Energy Fuels reported a loss per share of $0.01 whereas in Q1 2020, the company had reported EPS of $0.01.

But it wasn't only the company's first-quarter performance that shook investors' resolve. Management's peek at what lies ahead in 2021 also contributed to the stock's sell-off last month. Clean Energy Fuels forecasts 2021 net income of negative $76 million -- a significantly steeper loss than the $10 million net loss that it reported in 2020.

While shares of Clean Energy Fuels tumbled in May, they've come roaring back so far in June. As of this writing, the stock is up more than 50%. The important thing to recognize for would-be investors, however, is that the stock's recent rise isn't predicated on any positive news from the company. Instead, it appears that the stock has found itself in meme-stock territory.

Even with the stock's recent rise, though, investors shouldn't wholeheartedly dismiss the stock since Clean Energy Fuels had been gaining momentum before the pandemic. Shares may seem a little pricey now, but for investors with long time horizons, the stock remains a viable consideration.