Your employer's plan is a great place to start on -- and potentially achieve -- your financial goals.

Investing in your employer-sponsored retirement plan is one of the smartest things you can do to build a sustainable financial base. These plans provide an easy way to contribute and invest money that's earmarked for retirement. But are they enough on their own to cover your costs in retirement? Let's go through the pros and cons of using only a 401(k) to fund your golden years.

A 401(k) is a great starter vehicle when it comes to saving for retirement. First, they're widely available at most employers and generally convenient to access. Second, many employers offer an "employer match", which serves as a 100% return on any money you put into the plan. Last -- but most definitely not least -- you'll receive a tax deduction and immediately reduce your tax bill in the current year.

Money that's contributed to a 401(k) is considered tax-deferred: funds have the chance to compound freely for years until withdrawal. For most, this means in retirement, but in certain cases -- like in the event of a true emergency or other infrequent life event -- you can access the money earlier. This also depends on the specific rules of your employer's plan.

In 2021, the IRS limits employee contributions to 401(k)s to $19,500 per year. If you're able to save that much annually, retiring with just a 401(k) is more than doable. Contributing $19,500 annually to a 401(k) (assuming an 8% rate of return) would leave you with about $2.4 million after 30 years of work. While that amount would be more than enough to retire for most, whether or not it's enough really comes down to your personal needs.

Needless to say, saving that much for 30 years is challenging. With that said, you could at least try to contribute to your 401(k) up to the employer match for as long as possible. Even if you don't hit the millions in your 401(k), you'll be in a significantly better position than if you had done little or nothing. 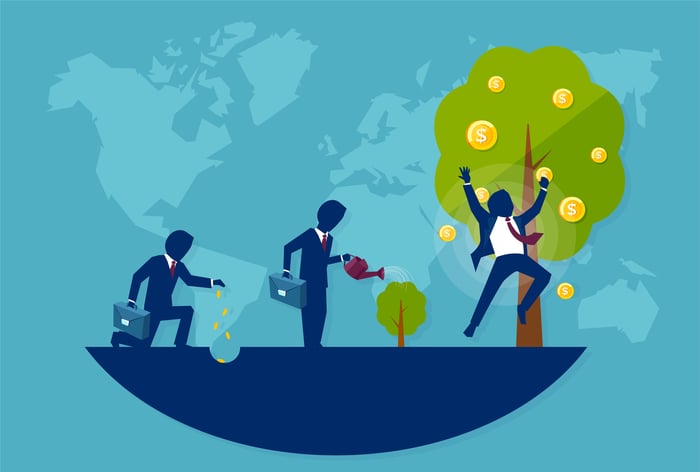 First, taxes. When you contribute to a 401(k), you're getting a tax deduction today, but this doesn't come without a catch. You won't pay anything in taxes today, but you will be liable for taxes when you withdraw the money in retirement. If tax rates rise generally -- and many signs point to just that -- you might end up paying a higher tax rate in retirement than you would have if you had chosen to pay tax today. That said, this is incredibly difficult to predict.

Because we don't know what's going to happen to tax rates in the future, it might pay to consider other types of accounts with different tax treatments -- like a Roth IRA or even an HSA -- to hedge against future changes in tax rates. If you have money growing in a Roth IRA and a fully or partially funded 401(k), you're prepared for whatever happens to taxes in the future.

Next, some 401(k)s are incredibly expensive. This could mean your employer's plan is held by a company that charges exorbitant fees, or it could simply mean the underlying investments in the plan come with high expense ratios. Either way, a costly retirement plan will ultimately cost you a significant amount. This makes other options more appealing.

Last, money in a 401(k) may be subject to complicated vesting rules or penalties for accessing the money early. Vesting refers to the point at which employer matching contributions become "all yours": some companies have schedules that say this money only becomes fully yours after three to five years of service. Some 401(k) plans may also levy penalties if you try to take the money out before it's time to retire. These restrictions make 401(k)s a bit less appealing if you think there's a chance you may need the money sooner than retirement.

Diversifying is usually the answer

As a general statement, your 401(k) is one of the best options for housing your retirement savings. While it is most definitely a great start, it's likely not sufficient on its own to optimize your position as a saver. Adding other accounts -- most importantly, a Roth IRA -- would be a smart thing to do given the uncertainty of future tax rates as well as the inflexibility of certain 401(k) plans. Make sure to cover all your bases and you'll be far better off when it comes time to retire.