Please ensure Javascript is enabled for purposes of website accessibility
Log In Help Join The Motley Fool
Free Article Join Over 1 Million Premium Members And Get More In-Depth Stock Guidance and Research
By Timothy Green - Jun 10, 2021 at 7:20AM

Lordstown Motors (RIDE -9.80%) was planning to be first to market with an electric pickup truck targeting fleet buyers. Whether the company manages to bring its Endurance truck to market at all is now up in the air.

Bad news has been piling up since the EV upstart reported its first-quarter results on May 24. In that report, the company slashed its guidance for 2021 Endurance production and year-end liquidity, and it raised its outlook for costs. Lordstown said that it was still in a position to ramp up Endurance production, but that it needed additional capital to execute on its plans.

On June 4, Lordstown disclosed that it had received a notice of delinquency from the Nasdaq exchange related to its first-quarter filing. When a company is late filing a quarterly or annual report, there's usually a reason. 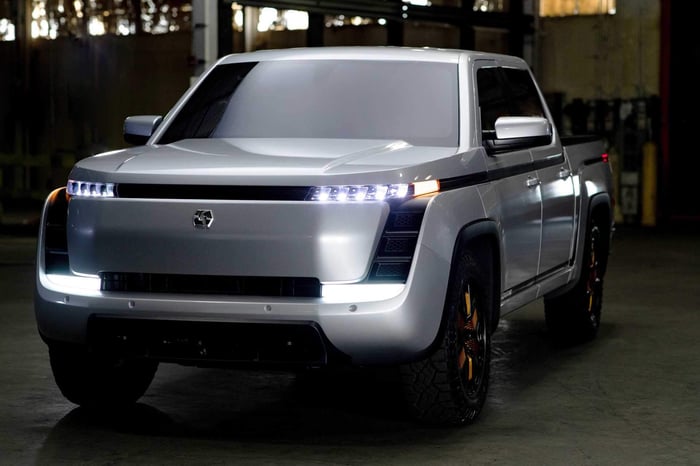 We learned that reason on June 8. In its delayed quarterly filing and in an amendment to its annual filing, Lordstown added language to make clear that additional capital is necessary for the company to remain in business over the next year.

Lordstown had $587 million in cash at the end of March, but it won't be enough. "Our ability to continue as a going concern is dependent on our ability to complete the development of our electric vehicles, obtain regulatory approval, begin commercial scale production and launch the sale of such vehicles. We believe that our current level of cash and cash equivalents are not sufficient to fund commercial scale production and the launch of sale of such vehicles," reads the filing.

As recently as March 25, when the company filed its 10-K, Lordstown was confident that it had enough cash to hit its original production forecasts for the year.

On top of the going concern language, Lordstown disclosed that it had restated financial results for 2020. The issue at hand was warrants associated with special purpose acquisition companies, but the company also said it had corrected other errors. These errors include the reporting of capital assets acquired through accounts payable and the disclosure of minimum purchase requirements.

Fighting Ford will not be easy

The timing of all this is interesting. Auto giant Ford (F -1.67%) unveiled the F-150 Lightning in May, including a Pro version aimed at commercial customers and fleets. The trucks will be available sometime in the Spring of 2022.

Lordstown was going to have trouble selling customers on its unproven electric trucks even without direct competition. With the F-150 Lightning in the mix, that task has become much harder, especially considering that Ford's truck starts at a lower price.

And of course, Ford is unlikely to run into the kinds of production issues that Lordstown is having. The company hasn't said why it went from confident in scaling production to needing more money in the span of two months. Something clearly went wrong.

Lordstown could manage to raise more cash. Reuters reported on Wednesday that the company is in talks with multiple parties for additional funding. But even if more money arrives and the Endurance goes into production this year, it's unclear why a typical fleet buyer would choose Lordstown over Ford. The F-150 has decades of brand equity behind it. With Lordstown's liquidity issues, time is not on the company's side.

Lordstown's truck doesn't appear to be any better than what Ford will offer next year. The company's forecasts have proven overly optimistic, and its accounting is sloppy. Even if Lordstown raises more cash, it may not be first to market, at least not with volumes that matter. If there's a bull case here, I'm not seeing it.