Please ensure Javascript is enabled for purposes of website accessibility
Log In Help Join The Motley Fool
Free Article Join Over 1 Million Premium Members And Get More In-Depth Stock Guidance and Research
By Jeff Little - Updated Jun 11, 2021 at 9:48AM

These three plays on the autonomous and electric vehicle space could rev up investors' portfolios over the next decade or more.

There's been a lot of hype around cryptocurrencies over the past year. Even a few that began as a joke are now being valued in billions, like Dogecoin (market cap of $42 billion). For those who can stomach their heavy volatility and high risk, some of these digital currencies may hold great promise as investments. But what they don't yet offer is a demonstrated history of usefulness and value in our lives or to the economy.

If you are looking for an investment that is innovative, but with a bit more demonstrated potential than crypto, you may want to instead check out the electric and autonomous vehicle spaces. 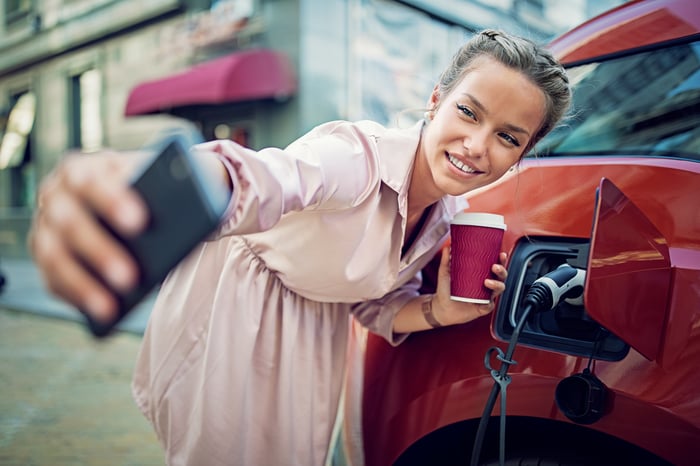 1. Ford: A change in focus that is trending in the right direction

With new CEO Jim Farley leading the way since October, Ford's focus is on becoming a leaner, more efficient company with a stronger supply chain that can be a leader in the electric vehicle (EV) revolution, from cars to battery cell technology and manufacturing. This plan includes developing more zero-emissions capable vehicles, and a target for 40% of global sales to come from electric vehicles by 2030. It also aims for all passenger vehicles it sells in Europe to be fully electric by that year.

Farley labeled 2021 as a "year of action," and the company has gotten it off to a good start. Revenue in the first quarter rose 6%, while warranty expenses fell by $400 million. The revenue jump was driven by a shift toward higher-margin vehicles and improved pricing, generating transaction prices $1,900 higher per unit than the industry average.

So far, investors are showing their belief in what some might call a turnaround for Ford. With a stock price hovering around a six-year high at $16 a share and the highest analyst price target of $18 well within sight, action is trending in the right direction. Ford's stock hasn't touched $18 in over a decade. Shares are already up almost 74% year to date, and up 126% since Farley took over. In the past six months, the company has made available electric versions of its iconic Mustang, its F-series trucks (the top-selling vehicles in the U.S. for the last 39 years), and introduced the return of the Bronco SUV line (including an electric model) -- slated for deliveries this summer. It also recently revealed a new smaller pickup, the Maverick.

Investors might want to be a bit cautious due to penalties Ford may have to pay in the future. The automaker is currently fighting in court against a Justice Department finding that some years ago it imported what it called passenger vans, but which were actually cargo vans. The vehicles, assembled in Turkey, were marketed and sold in the U.S. as two-person cargo vans. But the automaker made them look like passenger vans by placing cheap, easily removable rear seats in them, simply for the purpose of avoiding the much higher tariffs the U.S. imposes on cargo vans.

Ford could wind up paying a penalty of between $650 million to $1.3 billion. But that shouldn't impact the broad strategy the company has in place for growth.

2. Chargepoint: All those EVs are going to need changing

As the number of EVs rises, so will the need for charging stations. The International Energy Agency forecasts that by 2030, the number of EVs on the road worldwide will reach 145 million, and with increased government support for sustainability efforts, it estimates that figure could reach 230 million.

Chargepoint is a leader in the EV charging space. With 13 years of experience behind it, it touts 60% of Fortune 50 companies among its 5,000 customers. The company has over 18,000 locations spread across North America and Europe, supported by an easy-to-use mobile app that displays real-time availability information for charging locations.

In its fiscal 2022 first quarter, which ended April 30, revenue increased 24% year over year to $40 million. For its fiscal second quarter, it forecasts a top-line range of $46 million to $51 million, and full-year guidance for $200 million at the midpoint. And with a $610 million cash balance as of the end of its fiscal Q1, Chargepoint looks set up nicely for the long term.

A lower-risk approach to investing in the electric and self-driving vehicle markets would be to put your money into a larger, more diverse field of companies through an exchange-traded fund (ETF). The Global X Autonomous & Electric Vehicles ETF offers investors a concentrated focus in these areas, but doesn't restrict itself to automakers or charging station players.

The exchange-traded fund mixes key tech suppliers such as NVIDIA, Microsoft, Apple, and Blackberry in among the likes of Ford, General Motors, and Tesla, giving investors exposure to niches such as artificial intelligence for navigation and infotainment, and IoT data analysis. Currently, information technology stocks make up 32% of ETF's holdings, while consumer discretionary stocks account for 34%.

As of the end of the first quarter, the ETF's annualized returns have averaged 23% since its inception in 2018. Year to date, it has returned 10.7%. By comparison, the S&P 500 Automobiles and Components Index is down 2% year to date, while the broad S&P 500 has delivered a return of 12.9%.

Experts expect that the ongoing semiconductor chip shortage will continue to impact the EV market for up to six more months, but the world is still in the early stages of this EV boom. The market is expected to grow rapidly over the next five to six years to an estimated value of $802 billion by 2027. That would amount to a 400% climb from 2019's level.

For investors who are looking for long-term portfolio holdings, and who have the patience and the stomach to handle short-term volatility along the way, all three of these options could turn out to be big winners.