Please ensure Javascript is enabled for purposes of website accessibility
Log In Help Join The Motley Fool
Free Article Join Over 1 Million Premium Members And Get More In-Depth Stock Guidance and Research
By Parkev Tatevosian - Jun 12, 2021 at 8:49AM

Advertising revenue was formerly the domain of Alphabet and Facebook, but now Amazon is encroaching in their space.

Alphabet (GOOG -0.54%) (GOOGL -0.57%) and Facebook (META -1.01%) have ranked first and second in U.S. digital ad revenue for several years now, dominating this particular market and operating what some would call a digital ad duopoly. But the two dominators of the digital ad space had better watch out because at least one competitor is approaching fast on their heels.

That competitor is Amazon (AMZN -1.13%). Amazon has built itself into a massive retail behemoth that at least 200 million Amazon Prime shoppers often look to first when making a purchase. And that dominance is helping it make inroads into the digital ad space. 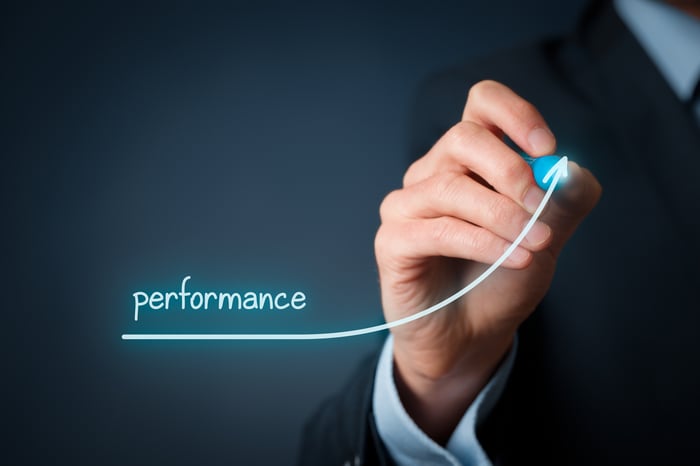 Fighting for your attention

The expansion of Amazon's advertising revenue is not going to slow down anytime soon. eMarketer projects Amazon's ad revenue will reach $19 billion in 2021 on its way to $25 billion in 2022. Simultaneously, Amazon would be increasing its market share of overall digital ad spending from 7.8% in 2019 to 12.7% in 2022. More and more marketers are looking to Amazon when allocating their spending budget.

Two sources are powering Amazon's digital ad growth: Search and display ads and its video advertising unit. Marketers covet access to the 200 million Prime members who have their credit cards on file with Amazon and are one click away from making a purchase. These shoppers also have access to fast and free shipping, removing another friction point in the buying process. When buyers search for a product on Amazon's website, businesses want their products to show up first.

Facebook and Alphabet will have difficulty countering this encroachment in their market. Amazon is the only retailer with a website ranked in the top 10 most visited websites. And arguably capturing the attention of a person visiting Amazon.com is more valuable to a marketer because that person has logged on to Amazon likely with the intent to buy something on that visit.

Advertising could add a lucrative source of revenue and profits (Alphabet and Facebook consistently generate operating profit margins north of 20%) to Amazon's flywheel. The e-commerce retailer is known for investing in its customer experience by offering free and speedy shipping. If Amazon can maintain the growth in its ad revenue, it can help fund even more investments in the customer experience, which will attract more customers.