The controversy never ends with this biotech's new Alzheimer's drug.

Biogen (BIIB -0.44%) stock has been on fire for the past month with a stunning gain of 46%, adding over $20 billion to its market cap. The biotech has dazzled investors and patients alike after receiving a conditional approval from the U.S. Food and Drug Administration (FDA) for Aduhelm. The drug targets Alzheimer's disease and is the first in 20 years to receive regulatory clearance for the indication.

Most people, even FDA panelists themselves, expected the agency to reject the drug's approval application due to weak scientific data. Biogen is not off the hook yet as it still needs to run a confirmatory study to verify the drug's efficacy. Can you count on its stock over the next 12 months? 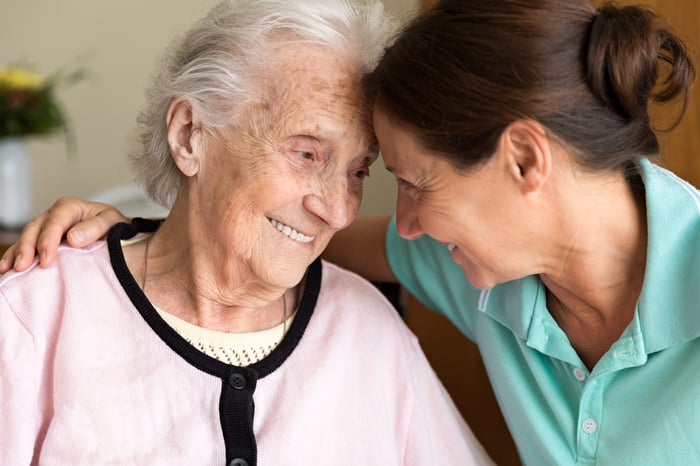 Aduhelm demonstrated a small, variable, nonreplicable benefit in improving cognition among patients with mild or moderate Alzheimer's disease in clinical studies. There are approximately 1.5 million Americans with Alzheimer's disease at this stage of progression.

The drug received regulatory clearance for reducing the number of toxic beta-amyloid plaques in the brain that are theorized to be the root cause of the disease. However, this surrogate endpoint does not always correlate with cognitive improvements. Take another placebo-controlled Alzheimer's study involving Cassava Sciences' (SAVA -0.36%) simufilam as an example. In its phase 2b trial, patients' beta-amyloid count went up after receiving the experimental drug, but they demonstrated decent cognitive improvements.

Three FDA panelists resigned over Aduhelm's approval, citing a lack of evidence that the drug actually works. From an investment standpoint, however, everything is working out -- Biogen plans to roll out Aduhelm within two weeks, and analysts from UBS are already predicting a whopping $13 billion in peak sales. The company is pricing the drug at $56,000 per year -- while nonprofits like the Institute for Clinical and Economic Review have said $8,300 per year is fair according to their cost-benefit analysis. Even at the elevated prices, doctors are already reporting strong demand from patients.

As for the confirmatory trial, Biogen does not expect to start the multiyear study until 2022. I highly doubt that Biogen is waiting this long and planning such a lengthy study out of scientific integrity or altruistic concerns for patients with Alzheimer's disease. Instead, the proposed study design gives Biogen nine years' time to market the drug without fear of repercussions. If the results fail to impress (which is very likely), then the company gets to keep its earnings from the drug -- with no refunds.

Biogen and its shareholders have been the first to benefit from Aduhelm's commercialization. Patients will likely benefit, too -- while $56,000 is the list price of the drug, bulk purchase discounts, pharmaceutical benefits, insurance co-pays, compassionate-use programs, and so forth can leave patients paying very little out of pocket. The drug also demonstrated strong safety data, so there's very little downside risk to prescribing it. Almost everyone with stakes in the drug wins -- at the expense of the healthcare system. It will be private insurers as well as Medicare that will be paying for the cost of the drugs, leading to higher premiums for everyone.

But Biogen desperately needed a catalyst to uplift its bottom line, and it got it. During the first quarter of 2021, its revenue and earnings per share (EPS) declined by 24% and 41%, respectively, to $2.7 billion and $5.34. The decline was due to patent expiry on its blockbuster drug Tecfidera for the treatment of multiple sclerosis, leading to multiple generic entrants.

Overall, Biogen stock is still very cheap after the pop, currently trading for 21 times earnings. Over the next year, I expect Adulhelm to experience an initial surge in prescription volume. Anything after that is uncertain, as multiple generics are available for Alzheimer's disease with far less controversy about their efficacy than with Adulhelm. Biogen remains a very speculative biotech that investors can consider adding to their watchlists.

Is Biogen a Buy After It Boosted Guidance?
366%