Questions about the popular cryptocurrency's energy use aren't as cut and dried as they seem.

Is Bitcoin (BTC 0.18%) destroying the earth? It takes a lot of energy to keep Bitcoin and other cryptocurrencies running. Cryptocurrency critics have raised the alarm about how all this energy consumption could harm the planet. Why does cryptocurrency use so much energy? How much is it contributing to carbon emissions? And is it part of the problem or the solution? The answer is more complex than you might think. 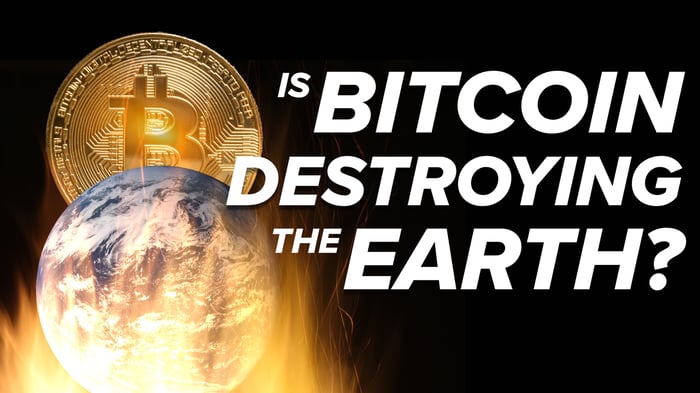 Why are people worried about Bitcoin's energy use?

We're collectively facing an ever-approaching deadline to abandon fossil fuels and the carbon dioxide they spew into the atmosphere. If we don't quickly switch to renewable forms of energy, science tells us that the effects of the changes we're already seeing in Earth's climate could go from unpleasant to catastrophic.

In May 2021, even Tesla CEO Elon Musk -- generally one of Bitcoin and cryptocurrency's most prominent supporters -- criticized the dramatic jump in how much energy Bitcoin used during the first months of 2021. Musk called the spike in energy usage "insane" and announced that Tesla would no longer accept Bitcoin as payment for its cars while working to push the cryptocurrency toward drawing its energy from sustainable sources.

Bitcoin burns energy, because it uses a process called "proof of work" to keep its network secure. Basically, every 10 minutes, computers connected to Bitcoin's network race to complete a special kind of math problem that takes a lot of processing power to calculate but is pretty easy to double-check once it's been solved. This solving and double-checking lets Bitcoin's network confirm that each new batch of transactions is on the up-and-up.

You could try to mine Bitcoin and other cryptocurrencies on your home computer. But to make real money mining Bitcoin, you need huge server rooms with powerful, specialized chips sucking down kilowatts like they were blenders full of protein shakes.

How much energy does Bitcoin use?

Estimates about how much power Bitcoin uses vary, but let's go with the best guess from the University of Cambridge's Centre for Alternative Finance.

As of late May 2021, Cambridge estimated that all Bitcoin transactions around the world were collectively using around 113 terawatt-hours every year. If Bitcoin were a country, it would roughly rank between the Netherlands and the United Arab Emirates in total annual energy use.

Sounds bad, right? But let's put it in perspective. Cambridge estimates that in the U.S. alone, the annual energy consumed by household devices not in use but still drawing power works out to 1.9 times Bitcoin's total energy consumption. That's right -- appliances like your microwave and toaster oven are silently, if only slightly, bumping up your monthly electric bill even when they're not running.

A widely-quoted 2020 report from investment management firm ARK Invest -- which has heavy investments in Bitcoin and other cryptocurrencies -- argued that Bitcoin is more efficient than it appears. According to ARK's report, Bitcoin consumes 10% as much energy as the global banking system and 40% as much as the global gold mining industry. But the numbers ARK used date from between 2014 and 2018 when Bitcoin apparently used less than half the annual energy it does now.

In 2021, Galaxy Digital, another Bitcoin investing firm, released its own assessment of Bitcoin's energy use focused on figures and estimates from 2018 or later. By Galaxy's best guess, Bitcoin now uses about half as much energy as gold mining and about 40% as much as the global banking system. So Bitcoin still looks like it consumes less energy than gold or banks -- but that gap has shrunk considerably in less than a decade.

Where does Bitcoin get its energy?

You also need to consider that energy use doesn't always equal carbon emissions. Renewable energy is getting cheaper and more widespread all the time. Estimates of how much of Bitcoin's processing power comes from renewable energy vary wildly, from 39% to 73%. But even that lower figure represents a bigger share of renewable energy than the U.S. can boast. As of 2020, renewables represented around 20% of total U.S. energy generation.

Bitcoin can be mined anywhere, which means miners tend to go where electricity is cheap. And sometimes, they can take advantage of places where renewable energy would otherwise go to waste. China, for example, wildly overbuilt its hydroelectric dams in several areas. The dams can only hold so much water before they have to let some out, generating power -- and they generate way more power than the areas around them need. That creates a paradise of clean, cheap energy for nearby Bitcoin miners.

But dirty energy can also be cheap. Plenty of Bitcoin mining takes place in regions with carbon-emitting coal or other fossil fuels. As just one example, here in the U.S., a coal plant in Dresden, New York, shut down in 2011, because there just wasn't enough local demand for the power it could supply. A private-equity firm bought it, converted it to natural gas -- the Diet Coke of carbon emissions, compared to coal's Coke Classic -- and reopened it as Greenidge Generation in 2017. But still, no one wanted to buy the power it was selling, so its owners decided to recoup some of their investment by using its output to mine Bitcoin right inside the power plant.

According to environmentalists opposed to the plant, New York State emissions data shows that Greenidge Generation's greenhouse gas emissions jumped tenfold between 2019 and 2020 -- the equivalent of 50,000 new cars on the road. The company behind Greenidge wants to quadruple its output by the end of 2022, and it's looking for more shuttered fossil fuel plants to buy up and turn into mining hubs. Without Bitcoin to justify the expense, none of that carbon would be going into the atmosphere.

Nic Carter, a Bitcoin booster and investor, has argued that the energy we expend to mine Bitcoin now will look increasingly efficient when those coins rise in value in the future. That's a valid perspective! But you could also argue that the damage we do to the atmosphere now with any carbon-intensive Bitcoin mining could have far-reaching and expensive consequences.

How can cryptocurrency solve its energy problems?

The good news? Cryptocurrency miners want to make money, which means they have a financial incentive to seek cheaper, more efficient ways to mine and run Bitcoin and other crypto networks. Those efforts can range from demanding more efficient computer chips and cheaper green energy to making changes in the way the underlying cryptocurrency networks actually run.

As it happens, proof of work isn't the only way to keep a cryptocurrency network secure. You can also use a method called proof of stake where your authority on the network comes not from the computer horsepower you harness but from the amount of the currency you're willing to temporarily lock up, or "stake," toward keeping transactions running smoothly. Proof of stake doesn't require all that number-crunching to keep the network safe, so it uses just a fraction of the computing power and energy -- around 99% less, by some estimates.

As of mid-2021, Ethereum (ETH 0.17%), the second-biggest cryptocurrency in the world by market cap, was working hard to switch from proof of work to proof of stake. If Bitcoin or other proof-of-work currencies follow Ethereum's lead, cryptocurrency's energy use could plummet even as the stability and power of its network grow.

Whether Bitcoin's using too much energy or not ultimately boils down to whether you think cryptocurrency is a good investment. Is it a temporary fad wasting power to solve useless math puzzles? Or is it the backbone of a new monetary system with the potential to be way more efficient than the old one? Maybe both?

If Bitcoin and other cryptocurrencies do succeed, they'll need to be sustainable and efficient, for their own sake and for the planet's. So if you invest in cryptocurrency or are thinking about it, keep an eye on the popularity of proof of stake over proof of work, the overall adoption of renewable energy, and the proportion of renewables used to power cryptocurrency networks. The lower the cost -- in carbon, computation, and cash -- to keep a cryptocurrency running, the better its chances of becoming a stable part of the global financial system.