Please ensure Javascript is enabled for purposes of website accessibility
Log In Help Join The Motley Fool
Free Article Join Over 1 Million Premium Members And Get More In-Depth Stock Guidance and Research
By Rich Duprey - Jun 17, 2021 at 8:45AM

At the right price, the video game retailer's stock could just be a buy.

Were traders on the WallStreetBets subreddit right about GameStop (GME 8.57%) after all?

It is only because of their willingness to rally around the video game retailer against hedge funds heavily shorting the stock that caused its shares to soar. The stock's elevated price allowed GameStop to raise hundreds of millions of dollars, albeit by diluting shareholders, but that let it vastly improve its financial position.

GameStop paid off all its long-term debt, reduced even its short-term debt to a relatively negligible amount -- just $48 million, which is the result of a low-interest loan from the French government similar to the CARES Act in the U.S. -- and ended the first quarter with over $707 million in cash and restricted cash in the bank.

It now has the financial wherewithal to achieve the dramatic business model transformation needed to meet the challenges of a rapidly changing video game market, again all seemingly thanks to a bunch of "apes" with "diamond hands" who beat Wall Street at its own game. 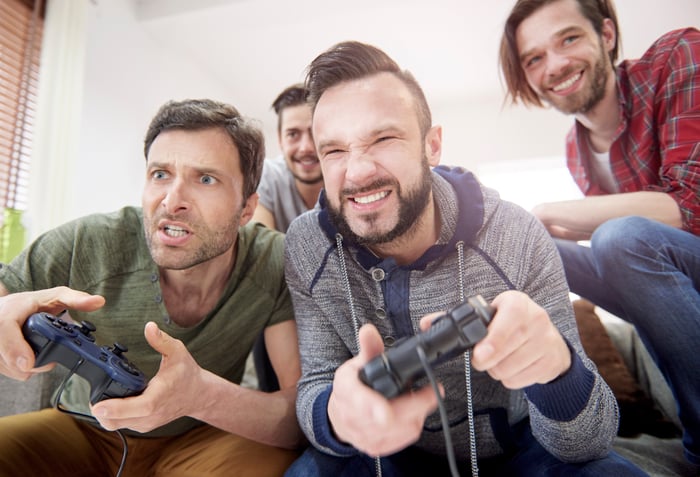 A business on the mend

GameStop looks better than it has in a long time. Its first-quarter earnings report saw sales jump 25% to $1.3 billion, despite having closed 12% of its stores globally as part of its "de-densification" efforts, for a net closing of 118 stores.

Although the retailer isn't providing any guidance yet, it says the second quarter is continuing the momentum, with sales in May up 27% from the year-ago period.

The video game retailer continues poaching executives from Amazon.com (AMZN -0.99%), just naming a new CEO and CFO who are coming from the e-commerce giant. They join three other executives who jumped ship to GameStop from Amazon (and it has some Google alumni as well).

Those C-suite additions should give investors hope that the retailer has a solid foundation on which to make the transition to a digitally oriented company.

Ryan Cohen, who led the charge to transform GameStop and was just installed as chairman of the board, has said he wanted the company to be a consumer-focused, online-centric retailer, essentially the "Amazon of gaming." The people he's brought on over the past few months give it a good base to work from, as they won't need to scale any massive learning curve to achieve the goal.

Cohen himself knows something about online retail as the co-founder of Chewy.com, the online pet supplies business.

All the pieces look like they're in place for a revival, even if the Reddit traders had no idea this was how it would all play out. Because they were looking to simply profit off the greediness of hedge funds that were trying to drive the stock price down to zero, the business portion of the outcome was likely a secondary consideration at the time.

Yet the fact that GameStop did have a business to build upon -- unlike, say, movie theater operator AMC Entertainment, which has seen a similar trajectory with investor sentiment, but which possesses a far shakier foundation -- could have been a motivating factor in picking it as a rally point.

Still, the saga has at least had one beneficial outcome already, as it introduced teens to the concept of investing, something many hadn't thought of prior to the whole meme stock trading frenzy erupting. With Fidelity Investments opening up teen-oriented brokerage accounts, GameStop might be able to lure them to its stock as well as its stores, whether online or off.

The wild card is how much investors (not traders, since they're apparently ready to bid the stock to the moon) are willing to pay.

Even after recently cratering 27% on a variety of concerns such as an SEC investigation into the trading activity and a new stock sale plan, GameStop is still priced at over $220 per share. It trades at three times its sales, 33 times its book value, and 255% the free cash flow it's produced over the past year.

There continues to be a lot more air beneath it where it can fall than headroom for it to rise.

Can the goal really be reached?

And by no means is GameStop's business out of the woods either. It is still laden with a sprawling portfolio of 4,700 brick-and-mortar stores, and it has yet to prove the thesis of its transformation: Can it actually become the "Amazon of gaming"?

Cohen says he's not ready yet to share exactly what GameStop's strategy will be to succeed, but certainly the business looks better-positioned than it has. The company seems to have learned a lot about the digital arena during the pandemic, and its finances are arguably in the best shape they've been in for awhile.

If it wasn't for the ridiculous current valuation of the video game retailer's stock, GameStop might even be a buy recommendation.