Please ensure Javascript is enabled for purposes of website accessibility
Log In Help Join The Motley Fool
Free Article Join Over 1 Million Premium Members And Get More In-Depth Stock Guidance and Research
By David Jagielski – Jun 17, 2021 at 5:32AM

The company officially closed its merger with Aphria last month.

Tilray (TLRY 3.52%) is the largest cannabis company in Canada, and its business, which now includes Aphria, also looks to be in the best shape to continue posting profits. However, both companies are coming off lackluster quarters pre-merger, and the Canadian cannabis market looks as if it may be approaching a peak (at least in the short term).

Now that the excitement from the merger has passed, and with Tilray generating some impressive returns thus far in 2021, is the stock destined to fall -- or can you still expect to earn a good return from investing in it today? 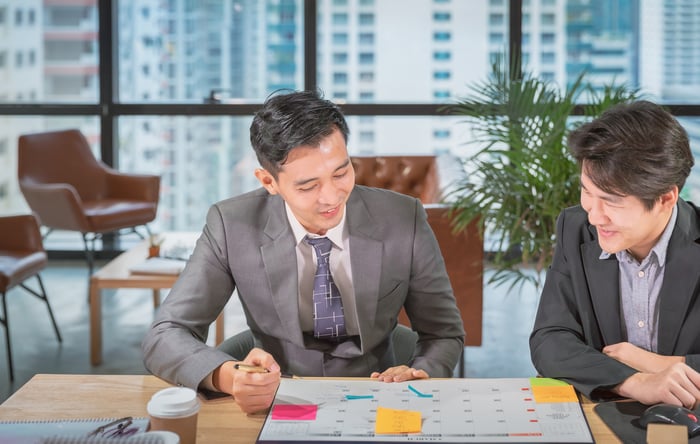 Sales are struggling, and you shouldn't expect growth in beverage sales to change that

In their last earnings reports before merging, both Aphria and Tilray posted revenue numbers that weren't all that great. For the first three months of 2021, Tilray's revenue of $48 million was down 15% from the previous period, when it reported sales of $57 million. Aphria wasn't a whole lot better, posting sales of 154 million Canadian dollars for the three-month period ending Feb. 28. That was a 4.3% decline from the CA$161 million it had recorded a quarter earlier.

Investors who are bullish on the company's beverages shouldn't bet on that lifting Tilray's top line. In its most recent period, the company reported that revenue from its equity method investments, which includes Fluent (beverages) and Cannfections (edibles), totaled just $1.1 million. Meanwhile, Aphria noted that since the acquisition of beverage company SweetWater on Nov. 25, that business has contributed less than CA$16 million in revenue to the company.

For a combined company whose pro forma revenue was supposedly $685 million when the Aphria-Tilray merger was first announced in December, less than $20 million in sales from hyped-up beverage deals is nothing to get excited about. And while investors can point to the long-term opportunities, analysts from Grand View Research project the global cannabis beverage market will be worth just $2.8 billion by 2025. That's a tiny sliver of the $47 billion global cannabis market that BDSA projects by the same year.

Generating any meaningful growth is going to be difficult for these companies, especially given the underwhelming numbers they have been posting even as the Canadian pot market has been showing greater sales as a whole. For the first three months of 2021, retail sales in the country totaled just under CA$840 million, which was 1.7% higher than the CA$825 million that Statistics Canada reported for the last quarter of 2020.

Has the stock peaked?

Year to date, shares of Tilray are up about 170%, and that's after coming down from highs it reached in February. This month, analysts from Cantor Fitzgerald and CIBC set price targets for the stock of $22 and $25, respectively. If Tilray's stock hits the more bullish target of $25, that could translate into returns of more than 30% from today's prices. But while Tilray may be cheap compared to rival Canopy Growth given their price-to-sales ratios, it's far from being a bargain: 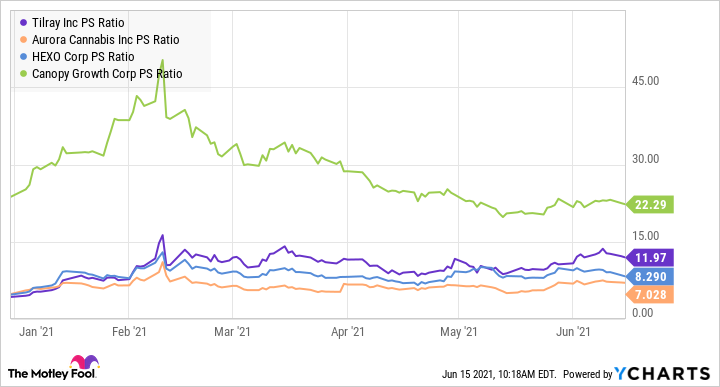 However, investors are likely willing to pay a premium for the stock given that in its latest quarter, Aphria extended its streak to eight straight periods of positive adjusted EBITDA. Profitability can be hard to come by for Canadian cannabis producers, so the stock's inflated value may not be all that unreasonable.

Should you invest in Tilray today?

Even though growth may be difficult to generate for Tilray, the pot stock is still one of the best buys in the Canadian cannabis industry. And analysts certainly believe there is still room for it to rise higher. However, neither of those are good enough reasons to invest in Tilray. The business is doing well during a decent growth period for the Canadian pot market, but I'm worried about what might happen if things slow down. With more promising opportunities in the U.S., growth investors are likely better off investing in a top multistate operator than in Tilray.

3 Ways to Invest In This Skyrocketing Growth Industry

Is a Mega-Merger Between Tilray and SNDL Inevitable?