Please ensure Javascript is enabled for purposes of website accessibility
Log In Help Join The Motley Fool
Free Article Join Over 1 Million Premium Members And Get More In-Depth Stock Guidance and Research
By Reuben Gregg Brewer – Jun 17, 2021 at 9:45AM

The giant U.S. steelmaker has a lot going for it, and its share price is up by 140% over the past year. But there's one important problem for investors now.

The U.S. steel industry has risen sharply over the past year, and each of the major mills has experienced big stock gains. Nucor (NUE 1.62%) has been no exception -- indeed, as the largest name in the space, it's often the go-to choice for investors seeking exposure to the sector.

But investors should be careful here. Despite the many excellent reasons to like the stock, there's an important issue that you should understand before you hit the buy button.

A few big-picture issues taking shape right now have put steel and Nucor on the minds of a lot of investors. First, the economy is coming back from the impacts of the coronavirus-led shutdowns. After a quick recession, generous government support of businesses and individuals has resulted in robust spending in some key steel end markets. 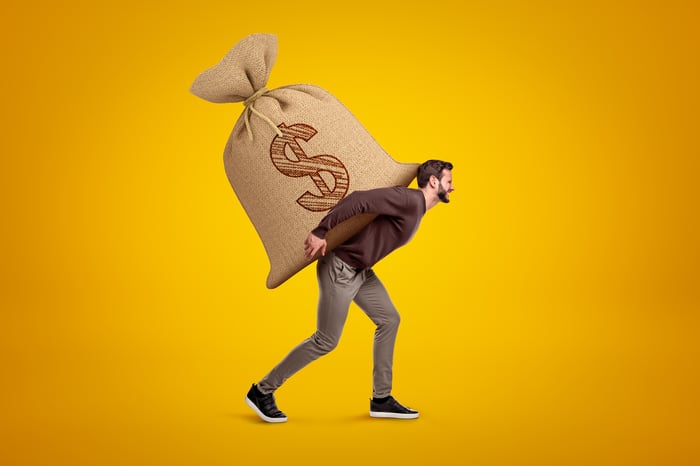 Indeed, although the pandemic was tough early on, Nucor's revenue only dropped 11% or so in 2020, and most of that was related to pricing -- the volume of steel it shipped only slipped 3%. The fourth quarter was an important turning point, however, as pricing rose both sequentially and year over year, and volumes started to strengthen. The first quarter of 2021, meanwhile, brought record sales as the turnaround continued. Nucor expects the second quarter to be very strong as well, with further benefits to come in the third.

In other words, there's reason for Wall Street to be optimistic here. But there is more to the story than this, given that the year started with talk of President Joe Biden's plans for a massive infrastructure bill. Steel is a vital component of infrastructure projects. And while the negotiations in Washington on the size and scope of that bill appear to have stalled somewhat, there remains a broad consensus across the political spectrum that vast swaths of U.S. infrastructure are in need of repair and upgrades. Expectations that this will eventually lead to political action will likely continue to support investors' optimism about Nucor and the wider steel industry.

What's so special about Nucor?

Then there are Nucor's unique qualities. It's the largest and most diversified U.S. steelmaker. It has the strongest balance sheet in the sector, with a debt-to-equity ratio of 0.47 sitting below the ratios of its peers, and an interest-coverage ratio of just over 14 -- also the best in the group. The company has increased its dividend annually for an incredible 48 consecutive years. If you are looking for a reliable steel stock, Nucor is probably going to stand out as the best option. 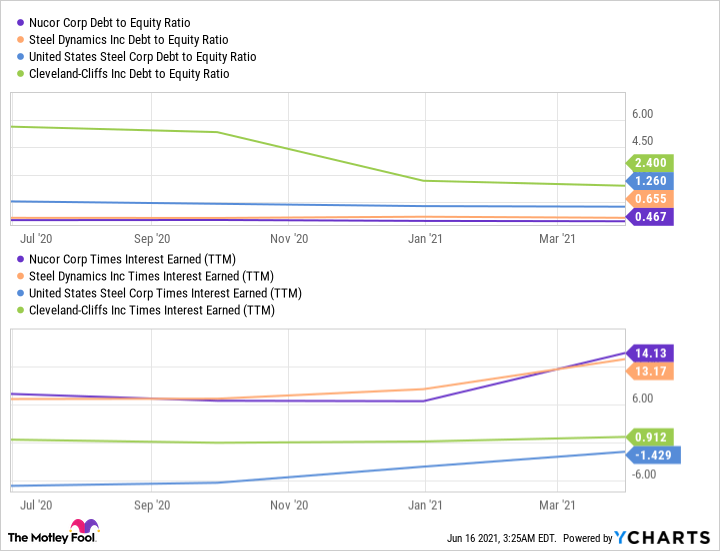 In addition, Nucor uses electric arc mini-mills. These are smaller and more flexible than blast furnaces, and are a key component of its industry-leading position. It is also vertically integrated, with operations in the scrap space that help supply it with a key steel-making input.

On the other side of the equation, Nucor has long focused on increasing the amount of commodity steel it uses internally to create higher-margin products, effectively increasing its profitability from the inside. And, on top of all of that, Nucor has a unique pay structure in which employees receive profit-sharing tied to company performance. In good times, employees share in the gains, while in bad times, they share in the pain, which gives Nucor a break on its salary costs when times are tough. Nucor is probably one of the best-run steelmakers in the world.

The fly in the ointment is its valuation. Steel is a highly cyclical industry -- it tends to do well when the economy is growing strongly, and poorly when the economy is languishing. Steel stocks usually follow along for the ride. As you would expect, Nucor's stock has been on an impressive run-up over the past year, after it dropped during the bear market and recession that accompanied the early stage of the pandemic. Nucor's 140% gain over the past 12 months isn't even the best run in the steel group: Financially weaker names with heavy blast furnace exposure advanced even more. But it's hard to complain about its stock performance. 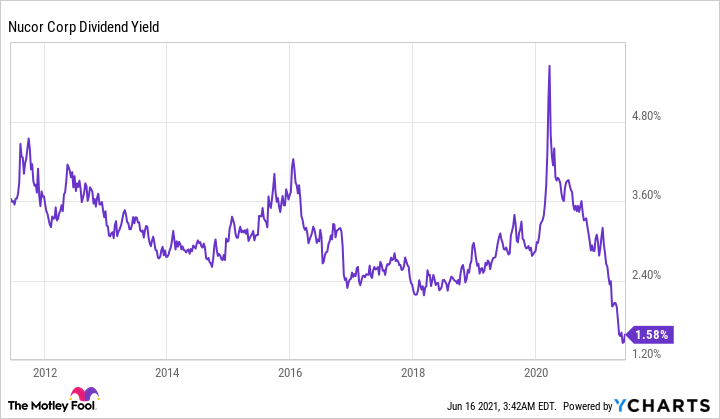 Although there are a number of valuation metrics that can be looked at, one that is notable here is dividend yield -- particularly given Nucor's history on the dividend front. The strong share price advance has pushed its yield down to a scant 1.6% or so -- near its lowest levels of the past decade. As the chart above shows, the swing in the yield from the bear market to today was swift and extreme. Clearly, investors have jumped aboard Nucor in a big way.

For most long-term investors, however, that suggests that this is probably a less-than-ideal time to buy Nucor stock. That's not to suggest that the steelmaker is a bad company, just to say that between the cyclical nature of the steel industry and the ongoing talks in Washington, D.C., many investors have jumped into the stock. It's expensive right now. But if history is any guide, the cycle will eventually turn and take the share price down with it, creating better entry points for long-term investors.

There's plenty to like about Nucor today, including its strong financial results. But there's also one major thing to dislike about it -- its valuation. Since steel is a cyclical industry, you should let Wall Street wag its tongue about Nucor, and wait. This well-run steelmaker's share price will fall back to earth just as it always has before. That's when you'll want to be a buyer, even though at that point, fewer people on Wall Street will be talking up the company.