The online gaming platform's a more compelling investment than its recent volatility would suggest.

Competitive gaming platform Skillz Inc. (SKLZ -3.81%) is disrupting the $86 billion mobile gaming industry by enabling players to compete for cash prizes. Beyond the cash games available today, Skillz is working to expand on multiple growth opportunities that could make the stock an eventual 10-bagger.

Mobile gaming is the fastest-growing segment within the $175 billion video gaming industry. But many mobile game developers lack the money and branding they need to monetize their games amid a crowded, competitive field.

Skillz solves this challenge, using patented algorithms that match gamers based on skill, and giving those players an arena to compete fairly for cash prizes. Players pay a fee for each match, from which Skillz and the developer each take a cut. Skillz's platform is unique because it doesn't rely on in-game advertisements or "pay-to-win" features. 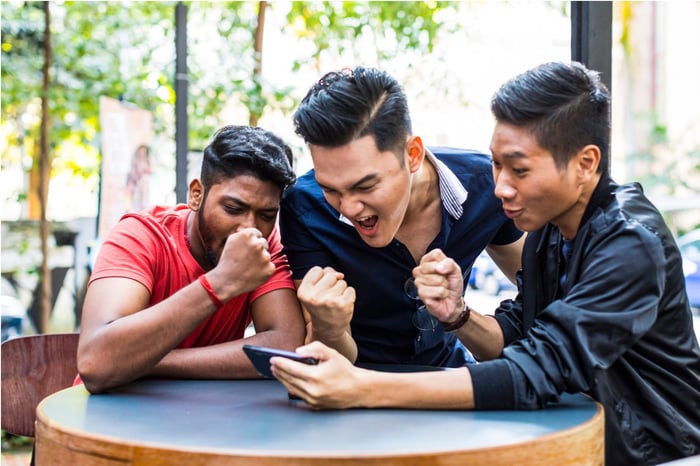 Monetization through competition has proven to be effective for Skillz. In 2020, its average user brought in $7.49 in revenue, versus just $2.35 on average between larger studios such as Zynga or Glu Mobile.

Competition has also proven to be a hit with gamers. Skillz grew revenues 92% year over year, generating revenues of $230 million. Its 2021 guidance calls for $375 million in revenue, up 63% from this past year.

While it's hard for most companies to maintain revenue growth this high, Skillz still has a lot of growth left to tap into. The games on its platform are mostly card and bingo games, and they're asynchronous -- they aren't played head-to-head in real-time. Skillz is currently developing the technology to support the same kind of real-time gaming for genres such as first-person shooters, strategy, and battle royale. Skillz is now testing real-time battles in Tetris Clash, so it appears a formal roll-out of real-time technology could be on the horizon.

Skillz intends to become a global company. It's about to enter India, its first major international launch, by year's end. This huge market houses more than 365 million mobile gamers. Compare that to the 2.7 million monthly active users presently playing Skillz-powered games, the vast majority of whom live in the United States.

According to CEO Andrew Paradise, Skillz currently generates 90% of its revenues from North America, yet the gaming market outside of North America is five times larger. Gamers in international markets have different cultural values, spending habits, and game preferences than those in the United States. Skillz will need to break down these barriers by getting compelling games onto its platform, and investors should not assume success until Skillz proves it over several quarters.

To help with this, Skillz recently acquired Aarki in a $150 million cash-and-stock deal. This demand-side ad-tech platform, with offices in Europe and parts of Asia, will help Skillz gain greater insights about its players, enable its developers to reach gamers, and boost its global footprint. Skillz had $612 million in cash at the time of the announcement; even after it completes this deal, it'll still have financial flexibility to ponder additional acquisitions or invest in product development.

The NFL and Skillz have partnered to launch a game developer challenge. Winning developers will launch games in time for the 2022 football season, with marketing support from both partners. Skillz also announced a partnership with Playboy that will feature a four-week tournament with Playboy-themed prizes.

A few months ago, Skillz also announced that famed Hollywood producer Jerry Bruckheimer had agreed to join the company's board. Bruckheimer has deep ties in Hollywood and is the majority owner of the NHL's new expansion team, the Seattle Kraken. These connections could open the door for additional brand partnerships in the future.

Skillz has the potential for multiple years of rapid revenue growth. If Skillz can execute at a high level, investors are looking at compelling upside. But as a young company, Skillz has to prove itself.

The company has been the target of multiple short reports because its high marketing expenses caused net losses to widen in 2020. Last year Skillz spent $250 million on sales and marketing, more than its $230 million in total revenues.

However, Skillz's platform operates at 95% gross margins. It spends so heavily on marketing because it receives a high return on its users over the long term. As Skillz grows, it expects brand deals and higher-quality content to reduce the need for such high marketing spending.

If revenues continue to grow while marketing expenses level out, those high gross margins could push Skillz toward profitability. For now, investors should be prepared for Skillz to continue posting losses as it continues to invest in expansion.