Please ensure Javascript is enabled for purposes of website accessibility
Log In Help Join The Motley Fool
Free Article Join Over 1 Million Premium Members And Get More In-Depth Stock Guidance and Research
By Bram Berkowitz - Jun 18, 2021 at 6:37AM

The bank has said it hopes to ramp up its investment banking and credit card operations, along with other areas.

When you look at the long list of improvements Wells Fargo (WFC -0.41%) has planned, it's clear that the bank's No. 1 priority is getting out from under the $1.95 trillion asset cap that's hindered its growth and cut into its profits for more than three years. Second on the list is probably the efficiency initiatives Wells Fargo is currently undertaking to get its expense structure more in line with those of its big-bank peers.

Wells Fargo is undertaking a lot of revenue initiatives right now. Since the beginning of the year, management has spoken about ramping up the bank's investment banking division, which includes underwriting more equity and debt offerings, and advising companies on mergers and acquisitions. The three other big U.S. banks -- JPMorgan Chase, Bank of America, and Citigroup -- all have larger investment banking operations than Wells Fargo.

The good news is that there is plenty of opportunity. Wells Fargo is one of the largest commercial lenders in the country, if not the largest, and it's already serving these clients well. Now it just needs to capitalize and convert these into investment banking relationships. Specifically, Wells Fargo CFO Michael Santomassimo said at a recent conference that while the bank won't try to compete globally, he thinks it could pick up share in the middle-market space, which is already a core client segment. 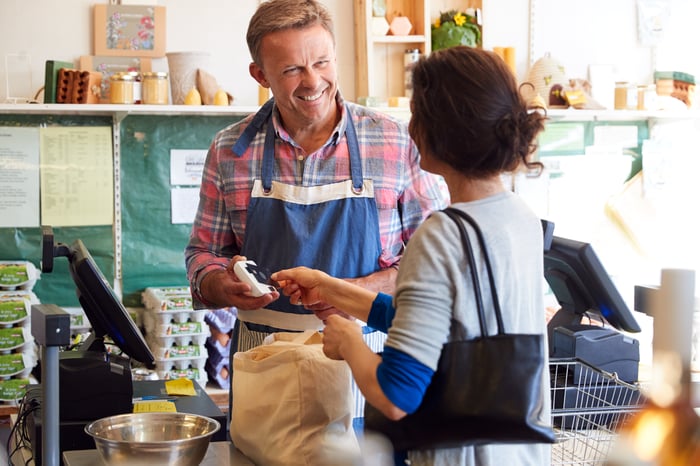 Wells Fargo is also planning to increase its credit card lending, another area where it trails its peers. Again, this is another opportunity the bank can execute on by broadening its relationships with its existing national consumer base. Recently, Wells Fargo began to ramp up its credit card lending by announcing a slate of new products. The bank launched a credit card offering 2% back on all spending with no annual fee. It's also planning to launch a low-interest rate card and a new rewards card later this year and in 2022, respectively.

Other areas where Santomassimo sees revenue opportunities are in wealth management, the mortgage space -- mainly by doing more for its current mortgage clients -- and even in the traditional commercial space, where Wells Fargo can expand into new markets to increase its existing market share.

Again, I'd like to emphasize that I see executing on these revenue opportunities as much more than just an opportunity. Wells Fargo spent the early part of this year selling off several of its business units, including asset management, student lending, its equipment financing business in Canada, and its corporate trust service. These sales have likely created some revenue holes for the bank. So if Wells Fargo can boost other lines like investment banking and credit cards, it could fill these holes, and potentially do so in a more efficient manner. Most of what Wells Fargo is proposing involves cross-selling to existing customers, which typically involves lower customer acquisition costs.

But another important reason to execute on these initiatives goes back to the pandemic. Obviously, Wells Fargo was limited by the asset cap the Federal Reserve placed on it in 2018 as punishment for its phony-account scandal. That's become problematic, because when the Fed dropped its benchmark federal funds rate to zero in March 2020, Wells Fargo didn't have enough capacity to offset lower interest rates on loans with higher loan volume. But there wasn't much loan demand during the pandemic, especially on the commercial side. So it's not like Wells Fargo would have found a ton of loan growth anyway, although the situation surely would have been better.

In reality, peers like JPMorgan and Bank of America found ways to overcome slumping loan demand and low rates with their investment banking and trading operations, which surged during the pandemic. This revenue diversity helped both banks offset troubles in their consumer banking segments, and left them plenty profitable even after setting aside billions for potential loan losses. Business lines like wealth management and mortgage also proved useful during the pandemic, while credit cards are a high-margin business. So ultimately, more revenue diversity and depth will be key to Wells Fargo's success in future recessions and rate cycles.

Wells Fargo has a lot of work to do, whether it's getting the asset cap removed or continuing to make the bank's expense structure leaner and more in line with those of peers to achieve greater efficiency. But I would also put revenue initiatives toward the top of its priority list -- they'll help the bank fill gaps from selling certain business lines, as well as achieve its former profitability levels and greater revenue diversity. The two largest of these revenue initiatives are investment banking and credit cards, with wealth management not far behind. If Wells Fargo can make progress on these and increase revenue, as well as pick up market share, the bank will be a lot better off long-term.