Please ensure Javascript is enabled for purposes of website accessibility
Log In Help Join The Motley Fool
Free Article Join Over 1 Million Premium Members And Get More In-Depth Stock Guidance and Research
By Patrick Bafuma - Jun 20, 2021 at 4:33AM

Alzheimer's disease patients who take Aduhelm will need a lot of diagnostic scans, too. Imaging leader RadNet stands to benefit.

As the largest owner and operator of diagnostic imaging centers in the U.S., RadNet (RDNT -0.52%) is a one-stop-shop for medical imaging. Providing X-rays, ultrasounds, CT scans, and MRIs, the radiology company valued at $1.8 billion will likely get a boost to its growth as a result of the recent FDA approval of Alzheimer's disease treatment aducanumab, developed by Biogen (BIIB -1.23%) and Eisai (ESALY -0.24%).

The arrival of aducanumab, to be marketed as Aduhelm, will spark an immediate surge in the need for advanced imaging, because those who are prescribed the drug will need a number of scans. One in particular is the amyloid PET scan, which detects the buildup of certain plaques in the brain that are believed to play a role in the development of Alzheimer's disease.

Advocating for insurance coverage of amyloid PET scans is a central pillar of Biogen's rollout of Aduhelm. Medicare and Medicaid don't currently cover this particular type of imaging. But at a cost of $4,000 to $5,000 per test, and with an estimated 1 million to 2 million Alzheimer's disease patients in the U.S., there's a potential multibillion-dollar addressable market in this indication alone. 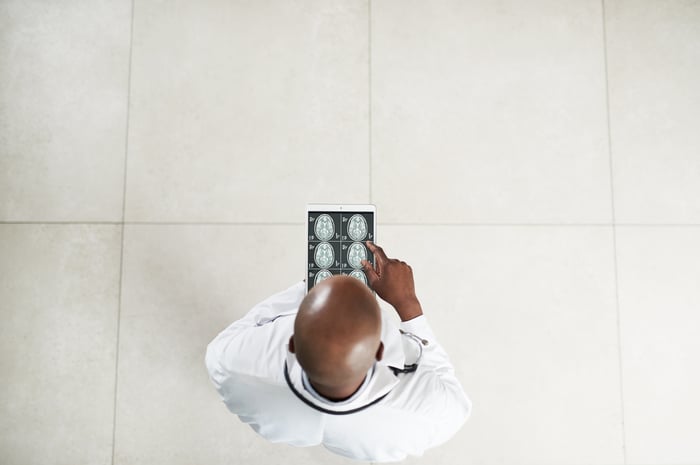 Next, let's talk MRIs. The FDA recommends all Aduhelm recipients get an MRI before their initial monthly treatments, and additional ones after months six and 11. Any time an abnormality is seen on those scans, follow-up MRIs are recommended. The FDA recommends the treatment be paused until those abnormalities stabilize, which will mean still more MRIs for surveillance.

Given that in Aduhelm's various clinical trials, abnormalities were seen 35% to 41% of the time on regularly scheduled MRIs, it's not hard to see that there is potential for a lot of them to be ordered. At a minimum cost of $1,600 for a brain MRI and at least three of them to be ordered within the first year of treatment, that's at least $4.8 billion worth of imaging business up for grabs. And with approximately 70,000 new Alzheimer's cases diagnosed each year , that's a potential renewing revenue stream of over $330 million worth of MRIs annually that will need to be performed.

As the largest national owner and operator of imaging centers, RadNet is a consolidator in a highly fragmented $100 billion diagnostic imaging market. It's the clear leader in the space, despite operating in only a few states (Arizona, California, Maryland, Delaware, New Jersey, and New York). There's no other fixed-site imaging center company even half its size in terms of revenue or number of centers.

While patients could go to a local hospital radiology department for their outpatient imaging, that option has several potential downsides for Alzheimer's patients. Hospital-based imaging is often more expensive and less focused on customer service, and the buildings frequently feature maze-like hallways and difficult parking situations. Perhaps most importantly, not all hospitals have sub-specialized radiologists evaluating their images. With its network of 300 locations and over 750 radiologists, RadNet avoids many of these issues.

Approximately 25% of its free-standing imaging centers are operated as joint ventures with large local healthcare centers. These agreements decrease local competition, drive volume with additional referrals, and bring management fees to RadNet's coffers. It can then expand its agreements to other services such as teleradiology, in-house staffing, and specialized services. One of these, BreastLink, is a unique breast care center that unites the imaging center, surgeon, and oncologist into an organized team, which leads to more efficient care and better communications. These joint ventures are sticky and stable -- the average age of the contracts involved is more than 10 years.

The company is also continuing to make significant investments in artificial intelligence solutions, and those are starting to pay off. In April, RadNet received FDA clearance for its AI mammography triage software, Saige-Q -- a screening tool that identifies suspicious issues in screening mammographies that may need prioritized attention, allowing radiologists to optimize their workflow. It seems to be working -- according to the company, radiologists are more than 25% more productive using Saige-Q. The diagnostic imaging company believes that its next AI product -- which is awaiting FDA approval -- should improve productivity even more.

With a price-to-earnings (P/E) ratio of 156, RadNet stock is certainly not cheap, especially compared to other mature outpatient services companies like dialysis provider DaVita (DVA 0.63%) and its P/E of 19. However, RadNet has significant tailwinds, with AI utilization and increases in the number of PET scans and MRIs performed likely to improve its margins. The company also has a proven track record for investors -- its share price is up by more than 850% in the last 10 years, more than doubling the gains of the S&P 500. Healthcare investors looking for stocks that will give them exposure to the Alzheimer's disease treatment market beyond Biogen and Eisai should have RadNet on their radar.