The pandemic-fueled heyday may be over, but this leading food delivery company is just getting started.

When DoorDash (DASH -3.69%) stormed onto the scene last December through its highly successful IPO, the stock immediately became a darling among growth-oriented investors. At the time, the country's largest food delivery company was viewed as a poster child for businesses that benefited from stay-at-home practices and government-imposed restrictions.

The acceleration in DoorDash's growth was spectacular. Revenue surged by 30% on a sequential basis to $879 million for the quarter ending Sept. 30, 2020. In the year-earlier quarter, revenue increased by a much more modest 11% to $239 million. 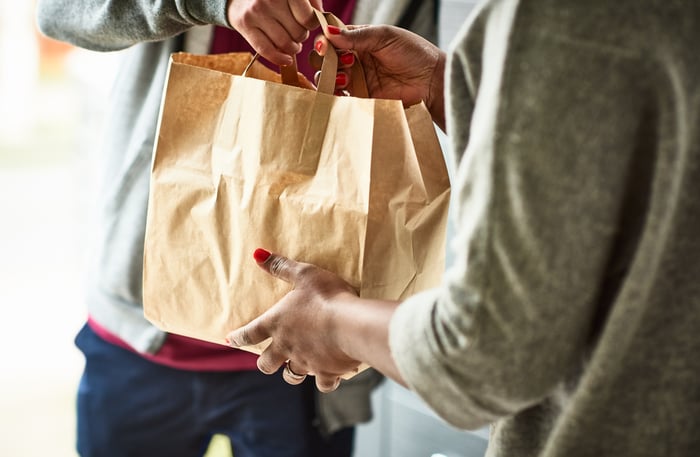 Similar to how it steered consumers who were previously uneasy about shopping online toward e-commerce platforms, the pandemic opened the door to food delivery services for many new users.

However, it didn't take long for the awe over these metrics to transform into angst due to the prospects of lower growth looming in a post-pandemic world. Just as quickly as investors stampeded to DoorDash's IPO, they abandoned the stock when the picture became murkier. This rush to exit the stock seems rash, though, because the company still has powerful growth levers to pull.

The key turning point for investor sentiment occurred on Feb. 25, when DoorDash reported fourth-quarter results. Although revenue and total orders soared by 226% and 233%, respectively, the attention centered on the company's tepid guidance.

Specifically, for fiscal year 2021, DoorDash guided for gross order volume (GOV) of $30 billion to $33 billion. At the midpoint of this range, GOV is forecasted to grow by 28%, representing a huge drop-off from the 208% surge experienced in fiscal year 2020.

Unsurprisingly, the update left a bad taste in investors' mouths, precipitating a sell-off that took shares nearly 40% below the $182 IPO opening price by mid-May.

The anticipated slowdown wasn't the only issue on DoorDash's menu. Following the passing of Proposition 22 in California last November, DoorDash and other "gig-economy" companies were mandated to provide health insurance subsidies to their employees. As a result, adjusted EBITDA declined by $51 million in the first quarter of 2021 compared to the fourth quarter of 2020.

As the company absorbed these higher costs, it also grappled with driver shortages. Not only is DoorDash now on the hook for paying health insurance stipends, it was also forced to boost compensation to entice drivers back to work. The combination of these headwinds drove its first-quarter take rate lower by 100 basis points sequentially, to 10.9%.

This wasn't a recipe for share gains as this convergence of troubles battered the company. However, under the surface, a new set of catalysts has been brewing.

Driving into a future beyond just food delivery

History is littered with companies that began by selling a single product or providing one service, before branching out into entirely new markets. Amazon, for instance, only sold books before evolving into an e-commerce powerhouse that sells virtually anything.

Although DoorDash's path is entirely different than Amazon's, a common thread is that its initial business is also a doorway into massive new markets.

About one year ago, the company began its journey to expand beyond food delivery. During this short period of time, DoorDash has made substantial progress by entering the grocery, convenience, pet, alcohol, and flowers and gifts categories.

In the first quarter of 2021, marketplace orders for these new markets grew by a robust 40% sequentially to account for over 7% of total orders. Key new partnerships with major retailers like Rite Aid and PetSmart are providing a spark.

With over 30 million small businesses in the U.S., and with DoorDash's GOV representing less than 3% of total off-premise spending at restaurants and food services, the company has only begun to scratch the surface of its growth potential.

While DoorDash broadens its horizons, readers can take comfort in one last encouraging statistic: According to DoorDash's IPO prospectus, 58% of adults and 70% of millennials say they are more likely to order delivery from restaurants than they were two years ago.

DoorDash may not be the obvious pick for investors that it was in 2020, but the company's best days may still be ahead.