Please ensure Javascript is enabled for purposes of website accessibility
Log In Help Join The Motley Fool
Free Article Join Over 1 Million Premium Members And Get More In-Depth Stock Guidance and Research
By Will Healy - Updated Jun 23, 2021 at 11:42AM

The lessons and legacies of these successes hold implications for today's tech investors.

Personal computer companies have at times served as some of the best wealth creators in Wall Street history. These businesses started small, building themselves around a product that they felt would change the world -- and it did.

In the decades since the birth of the PC, most of the companies in that segment have shifted their focus away from those devices. Nonetheless, the visions exhibited by Apple (AAPL -0.44%), Intel (INTC 0.62%), and Microsoft (MSFT -0.74%) not only brought technology to the home user but also made some early small-scale investors millions of dollars.

Steve Jobs and Steve Wozniak founded Apple in 1976 in a garage in Los Altos, California. The startup spent the 1970s refining its original PC design before going public in December 1980 at $22 per share. At that IPO price, a $10,000 stake bought 454 shares. 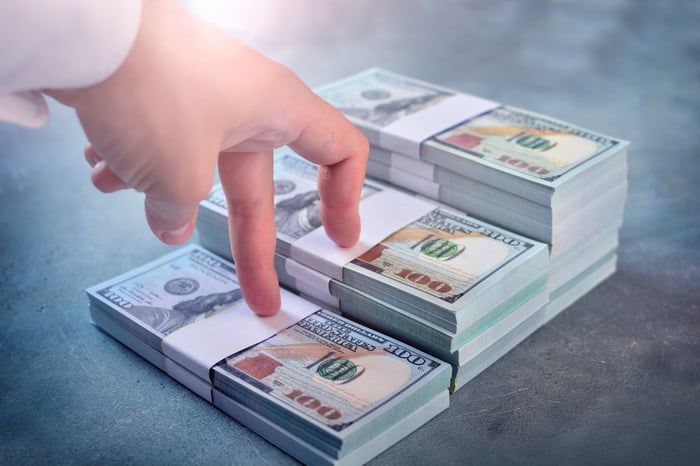 However, Jobs left the company in 1985, and it was flirting with bankruptcy by the time he returned in 1997. Hence, practically all of Apple's net stock gains occurred after that time. Although Jobs revived the company initially with the iMac, he drove it to most of its growth by taking the focus away from its Macintosh line of personal computers. The popularity of products such as the iPod and ultimately the iPhone would further de-emphasize the role of personal computers at Apple.

The company's success also helped to spark a change in attitude at Berkshire Hathaway. Its innovations and earnings growth turned CEO Warren Buffett -- who previously avoided investing in the tech sector -- into a fan. Today, Apple is the largest stock holding in Buffett's portfolio.

PCs didn't even exist when Gordon Moore and Robert Noyce founded Intel in 1968. Early in its history, it created the world's first commercially-produced microprocessor, the Intel 4004. That innovation made it possible for smaller machines such as PCs to perform functions that previously required much larger hardware.

Building on the microprocessor, Intel went public in October 1971 at $23.50 per share. At that IPO price, $10,000 would have bought 425 shares. Factor in the 13 stock splits Intel has undergone since then, and the effective IPO price drops to about $0.02 per share and the original 425 shares become 494,400 shares (assuming one subtracts away the fractional shares left after each split). At the current price of about $57 per share, that $10,000 initial investment would hold a value of just under $28.2 million.

Practically all of those gains occurred in the 20th century. Intel stock =today is trading below its 2000 high, and the company hasn't initiated a stock split since 2000. Since the decline of the PC, Intel has lost its technical lead to Taiwan Semiconductor Manufacturing. However, it has attempted a comeback in recent years by designing chips for data centers, self-driving cars, and other applications, and it remains one of the world's largest semiconductor companies.

Software, too, played a critical role in the PC's development. Bill Gates and Paul Allen recognized early on that this would be the case, and founded Microsoft in 1975 to compete in that arena. Nonetheless, their company would not enter the operating system business until 1980.

In November of that year, it contracted with IBM to provide MS-DOS as the operating system for the IBM PC, a deal that laid the foundations upon which it built its dominance around its operating systems.

Microsoft retained ownership and control of MS-DOS, which then became the most common operating system for the clone PCs built by many of IBM's competitors.

Over time, Microsoft diversified into productivity software, gaming, search, and a host of other areas. However, following the decline of the PC, the company's cloud offerings led its recovery. The success of its cloud computing business has helped lift Microsoft stock nearly 1,000% higher over the last 10 years. According to Canalys, it lags only market leader Amazon in the cloud infrastructure market, fueling its continued success.

The tech world has largely moved beyond its focus on personal computers, and today's investors should not expect modest investments in PC stocks to turn them into millionaires.

Nonetheless, the rise of the PC helped play a role in developing new industries such as the internet, e-commerce, cloud computing, and streaming media. Consequently, $10,000 invested in the IPOs of related companies such as Amazon, Cisco, and Netflix turned more small investors into millionaires. Considering that progress, we likely have not seen the last growth tech stock that partially owes its success to the rise of the PC.