Please ensure Javascript is enabled for purposes of website accessibility
Log In Help Join The Motley Fool
Free Article Join Over 1 Million Premium Members And Get More In-Depth Stock Guidance and Research
By Bram Berkowitz - Jun 22, 2021 at 7:43AM

JPMorgan is preparing to launch a digital bank in the United Kingdom and recently acquired the U.K. wealth manager Nutmeg Saving and Investment Limited.

In January, JPMorgan Chase (JPM 3.03%), America's largest bank by assets, confirmed long-standing rumors that it would launch a digital consumer bank in the United Kingdom. The bank's first product will be a checking account, which could be followed by other products like credit cards and residential mortgages. Adding to this effort, JPMorgan recently announced that it plans to also purchase the popular U.K. digital wealth management company Nutmeg Saving and Investment Limited, which offers individual savings accounts (ISAs), junior ISAs, lifetime ISAs, pensions, and general investment accounts. Nutmeg has amassed the equivalent of nearly $4.9 billion in assets under management and 140,000 customers.

With the planned launch of its digital bank and now a splashy acquisition, JPMorgan seems to be taking the U.K. market seriously. Will this move pay off for the bank? Let's take a look.

Why is JPMorgan doing this?

Not only does JPMorgan Chase already trade at a high premium, but the bank also has tons of excess capital -- tens of billions of dollars -- and its coffers aren't likely to get depleted any time soon. The bank is expected to generate very strong earnings this year and in general has tremendous earnings power.

JPMorgan is also already doing a lot in its other areas of business. It's heavily investing in technology and has authorized a share repurchase plan that could see the bank buy back as much as $30 billion of stock. Additionally, JPMorgan can't make depository bank acquisitions in the U.S. because it already owns more than 10% of U.S. deposit market share. The bank will be in all 48 states of the contiguous U.S. by the end of this year and is already in the process of expanding its retail brick-and-mortar presence in other U.S. markets that it doesn't have a big market share in. 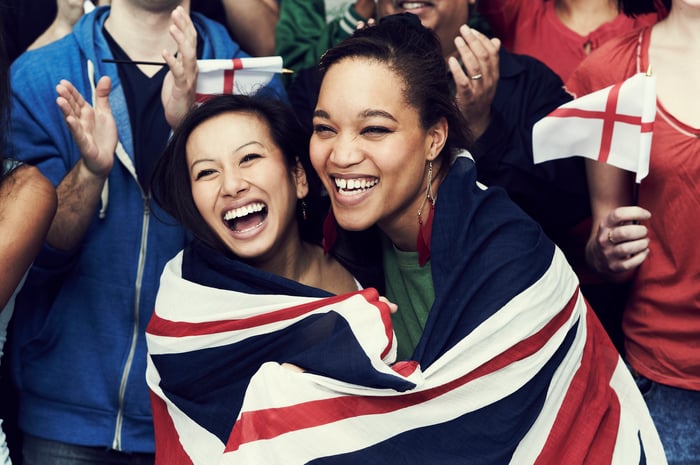 Considering everything the bank is already doing in its home market and the investments being made, JPMorgan likely sees further global expansion as the next stage of growth. The U.K. is a good market to start with because it is highly developed and JPMorgan already has a presence there with its investment bank. JPMorgan is taking a conservative approach and does not plan to go in with lots of physical branches. Rather, it will simply roll out a digital app that will offer banking products and services to U.K. residents. If the model is successful in the U.K., it could be rolled out to other countries in the near future.

JPMorgan also seems to be making a very concerted effort in the U.K. market. Most banks take a buy-or-build approach, where they build their products or new market presence from scratch, or make an acquisition to jump-start its efforts. JPMorgan appears to be doing both in some regards by building its own digital bank, but then buying Nutmeg, which will perhaps add to its capabilities in the future, as well as give JPMorgan a big audience to potentially cross-sell and sample its new products to. Interestingly, following the acquisition of Nutmeg, Sanoke Viswanathan, CEO of JPMorgan Chase's international consumer division, reiterated that the bank is "building Chase in the U.K. from scratch." JPMorgan also said it is still deciding whether or not to keep the popular Nutmeg brand or fold it under the Chase brand, so it's still to be determined how JPMorgan will ultimately integrate and position Nutmeg alongside its digital bank.

Can JPMorgan succeed in the U.K.?

Whether this push into the U.K. will pay off is the big question. JPMorgan previously tried launching a digital bank in the U.S. called Finn, which got shut down in 2019.

The U.K. banking market is also highly competitive and doesn't have the best track record when you look at banks in the market and profitability. For instance, of the top five largest banks headquartered in the U.K. -- HSBC (HSBC 0.31%), Lloyds Banking Group (LYG -0.07%), Natwest Group (NYSE: NWG) (formerly Royal Bank of Scotland), Barclays (BCS 1.12%), and Standard Chartered (SCBF.F 5.86%) -- all have all failed to generate a return on tangible equity of 10% in the last three years, other than Lloyds in 2018.

What JPMorgan has done is on a completely different level. The bank generated a return on tangible common equity of 17% in 2018; 19% in 2019; and 14% in 2020, despite the pandemic. Most U.K. challenger banks have also struggled to gain profitability, although it's likely not a primary focus for them, given that like most start-ups they are focused on achieving scale and growing their customer base in the early years.

But while banks in the U.K. haven't flourished, there are plenty of reasons this market could be attractive for a bank. There were close to 67 million people in the U.K., as of 2019, and it is the sixth largest economy in the world. Goldman Sachs (GS 0.84%) saw great success in deposit gathering when it entered the U.K. market with its digital bank Marcus.

A good bank to bet on

It's hard to know if JPMorgan can make this venture profitable enough to be worth keeping. But so far, I like the approach of going in with a real-estate-light model and focusing on the bank's digital capabilities. I also like the idea of purchasing Nutmeg because it accelerates the bank's scale in the U.K. and gives it a jump-start in terms of acquiring a customer base. I imagine JPMorgan will eventually try to integrate Nutmeg and its digital bank under one umbrella. JPMorgan is really good at pretty much every aspect of banking, but especially consumer banking, so if there is one bank that I would bet on to find better levels of profitability in the U.K., I would put my money on JPMorgan.