Please ensure Javascript is enabled for purposes of website accessibility
Log In Help Join The Motley Fool
Free Article Join Over 1 Million Premium Members And Get More In-Depth Stock Guidance and Research
By Jennifer Saibil - Jun 23, 2021 at 7:17AM

Retail sales were down in May, but this one surprising number showed growth.

The restaurant industry had some of the worst fallout of any sector from the pandemic, and many smaller outfits had to pick up and pack out after they lost sales from long closures. But signs are pointing to a real recovery, both for the U.S. economy in general and for the restaurant industry in particular.

As that happens, the main beneficiaries are going to be large restaurant chains, putting Starbucks (SBUX -1.32%) in the limelight. This is why it's poised for a major comeback in the third quarter. 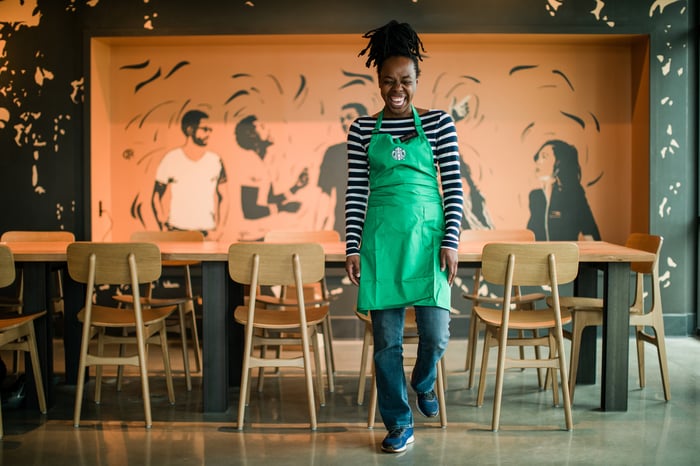 Starbucks' operating model isn't strikingly different than that of many other coffee shops. What's deceptively simple is the laser focus on the customer experience, which has propelled the coffee purveyor into a multibillion-dollar coffee shop chain.

That works really well when people are out drinking coffee, but it tanks when people are at home. Fortunately for Starbucks, that period is coming to an end in many locales. Sales already rebounded in the second quarter of 2021, for the fiscal period that ended March 28, when comparable sales increased 15%. That's compared to Q2 2020, when the impact of the pandemic was already seen in sales and comps decreased 10% year over year. The Q2 2021 number is still elevated over the Q2 2019 number, which is real progress.

But it might get even better in the third quarter.

What most investors may not realize is that restaurant sales are typically higher than sales in the grocery store channel. That all changed during the pandemic, and Starbucks' comps fell as much as 65% in April 2020. They remained below grocery sales since the pandemic started but finally kicked back up in April, and even more in May, according to the U.S. Labor Department's most recent sales report. Restaurant sales grew 4.5% in April over March, 121% year over year, another 2% over April in May, and 71% over May 2020. That's clearly tied to the vaccine rollout and the reopening of the economy, and Starbucks is poised to benefit.

It's the largest U.S. restaurant chain by revenue with $24 billion in fiscal 2020 sales, and its strong cash position allowed the company to keep operating during the pandemic as well as raise its dividend. Its focus on artificial intelligence allowed it to quickly target customers where they were and allocate resources to develop off-premise purchase options such as opening more drive-thrus and expanding order pickup, and sales have been slowly rising each quarter since the dive last year.

It's now back in offense mode. With sales growth back in its favor, Starbucks is moving into new store openings with 283 net new stores so far in fiscal 2021. That includes 110 net new stores in China in the second quarter to pass 5,000 in that rapidly growing market. The company has said that it plans to open 1,100 net new stores in fiscal 2021,and it's aiming to reach 55,000 global stores by 2030, potentially overtaking McDonald's as the largest restaurant chain in the world.

In the short term, Starbucks is still dealing with the effects of people not going back to the office or otherwise changing their shopping habits. To that end, it will close 800 North American stores this year. That sounds like a lot, but with more than 18,000 stores in the Americas segment and a total store count approaching 33,000, it's a strategic move to recognize the reality of a changing workforce and consumer purchasing behaviors. Starbucks is developing retail formats more in line with shopping trends and rolling out stores where customers are with the intention of increasing loyalty.Combined with favorable indications for restaurant spending, that should go a long way.

Starbucks stock gained 44% over the past year and is about flat year to date. It's trading at 31 times forward one-year earnings, a reasonable valuation. There's good reason to expect that Starbucks' sales will show ample improvement in the third quarter and that should result in shareholder gains.