Please ensure Javascript is enabled for purposes of website accessibility
Log In Help Join The Motley Fool
Free Article Join Over 1 Million Premium Members And Get More In-Depth Stock Guidance and Research
By Evan Niu, CFA - Jun 23, 2021 at 10:00AM

The nascent EV start-up enters the final stretch before launching the Air sedan.

The marketing blitz seems to be working. Over the past several months after announcing that it will merge with special purpose acquisition company (SPAC) Churchill Capital IV (CCIV), electric vehicle (EV) start-up Lucid Motors has been opening more studios around the U.S. while also ramping up advertising campaigns to raise brand awareness. Lucid even cleverly bought an ad spot during Elon Musk's appearance on Saturday Night Live last month, knowing that the Tesla CEO would attract a receptive audience.

Lucid is heading in the final stretch before both entering production as well as closing its de-SPAC transaction with Churchill Capital IV. The company has now added over 2,500 reservations in four months. 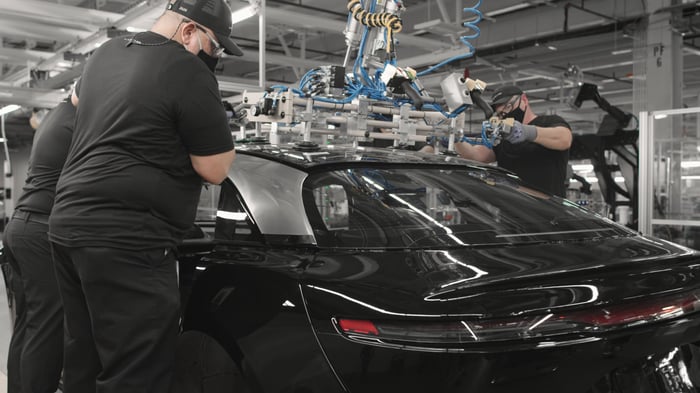 When Lucid announced the merger, it had approximately 7,500 reservations for its Lucid Air sedan. The company provided investors with a handful of updates this week as it opens a new flagship store in New York City. Among the more pertinent updates was that Air reservations have now topped 10,000.

Here's a timeline of Lucid's disclosures regarding reservations, which includes all trims.

Additionally, Lucid says that it has now completed all of its preproduction builds and has started producing quality validation builds. In a follow-up interview with CNBC, CEO Peter Rawlinson noted that those units will be delivered to customers once the quality is confirmed to meet Lucid's rigorous standards. The chief executive called the milestone "a big step forward" toward launching the Air.

In fact, Lucid has even decided to accelerate some of its plans due to robust demand. The company is accelerating around $350 million of planned capital expenditures that will be used to expand manufacturing capacity at its Arizona factory. That budget is being pulled forward from future periods into 2021 through 2023, translating into 6% to 7% more capital spending during 2021 through 2026, according to Lucid.

The money will be used to combine the next two phases of the factory expansion into "one expedited phase," implementing a general assembly line for the Gravity SUV that is in the pipeline. As a reminder, Lucid already completed Phase 1, which has capacity of approximately 34,000 units per year. The new plan will provide an additional 2.7 million square feet of manufacturing space, which will facilitate up to 53,000 Air units per year by 2023.

The Gravity SUV is mostly on schedule, but Lucid expects to release the vehicle near the end of its projected timeline in the second half of 2023. The company reiterated its delivery outlook for 2023 and 2024, which calls for 49,000 units and 90,000 units, respectively.