Please ensure Javascript is enabled for purposes of website accessibility
Log In Help Join The Motley Fool
Free Article Join Over 1 Million Premium Members And Get More In-Depth Stock Guidance and Research
By Timothy Green - Jun 24, 2021 at 7:15AM

One of the biggest trends in the food industry is plant-based processed foods. These include non-diary "milks" that can be added to coffee and cereal, and pea or soy-based "meat" that aims to mimic the taste and texture of the real thing. It seems like new products are popping up every day.

While it can be tempting to invest in this industry, the biggest publicly traded players don't look like great investments to me. Here's why oat milk pioneer Oatly (OTLY 6.43%) and fake meat leader Beyond Meat (BYND 21.89%) don't belong in your portfolio. 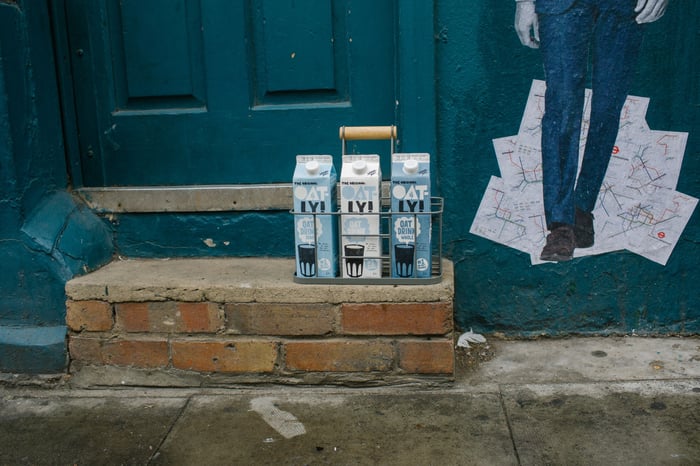 You can find products from Swedish oat milk company Oatly in over 32,000 coffee shops and 60,000 retail stores around the world. Oat milk -- a mix of oats, vegetable oil, and water -- has long been popular in some European countries, and now it's quickly gaining steam in the U.S.

Oatly's international expansion and its growing portfolio of oat-based products has yielded some impressive results, with revenue more than doubling in 2020 to $421 million. With cash from its recent initial public offering in its pocket, Oatly has big plans. The company expects to pour as much as $1 billion into capital expenditures through 2023.

The growth story sounds compelling, but there are a few things investors need to know. First, there is a lot of competition, and it's unclear how much brand matters when it comes to oat-based products. Food site The Kitchn sampled 20 different kinds of oat milks in March -- yes, 20 -- and Oatly was not a recommendation. The fact that there are even that many options should tell you right away that this market is going to be tough for Oatly to dominate in the U.S.

Second, Oatly is not profitable despite being founded over 25 years ago. It posted a net loss of $60.4 million in 2020, up from a loss of $35.6 million in 2019. The company managed a gross margin just over 30%, and it spends around 40% of revenue on selling, general, and administrative costs. Oatly is certainly investing in growth, but this is not a start-up. This is a 25-year-old packaged food company that doesn't make any money.

Lastly, Oatly's valuation is optimistic to say the least. The company is worth about $15.5 billion, putting the price-to-sales ratio at 37. That ratio will drop quickly if Oatly can keep growing fast, but again, this is a packaged food company. Oatly is pricier than some fast-growing software companies. It's worth more than packaged food giant J.M. Smucker, which produced $8 billion of revenue last year.

Oat milk may be a fad that consumers eventually drop. Even if it isn't, it's hard to see how Oatly can grow into its valuation anytime soon. 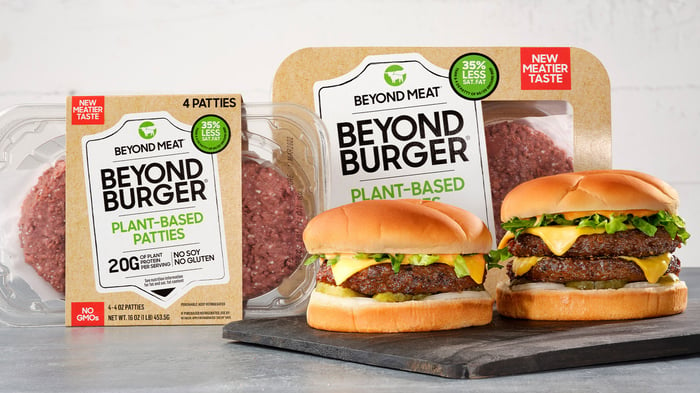 Like Oatly, fake meat company Beyond Meat has a competition problem. There are a lot of options for consumers looking to swap out real meat for plant-based substitutes. There's Impossible Foods and countless start-ups looking to tap into this growing market. And established food companies have been gunning for market share as well.

Can Beyond Meat rise to the top of this ultra-competitive market? Or will the fake meat market end up looking like the real meat market, with volatile prices driven by supply and demand? Commodity meat is a low-margin affair, and it's not clear whether fake meat will be any different.

Beyond Meat's sales to the foodservice industry are still declining, so total revenue only ticked up by 11.4% in the first quarter. U.S. retail sales jumped 27.8%, and international retail sales nearly tripled. The foodservice picture should improve as the pandemic ends, but my guess is that many restaurant chains will eventually opt to make their own plant-based products as the market grows.

Beyond Meat is valued at about $9.2 billion, good for a price-to-sales ratio of roughly 23. That's not quite as pricey as Oatly, but it's still extremely expensive for a packaged food company. Given Beyond Meat's sluggish growth rate, the fact that the company is not turning a profit, and the immense amount of competition, it's best to stay away.

Why Oatly Stock Tanked on Tuesday

Why Oatly Stock Jumped 16% in May

This Is Why Oatly Group Stock Fell 29% Last Month