Please ensure Javascript is enabled for purposes of website accessibility
Log In Help Join The Motley Fool
Free Article Join Over 1 Million Premium Members And Get More In-Depth Stock Guidance and Research
By Reuben Gregg Brewer - Jun 24, 2021 at 7:30AM

I bought these stocks during "bad" times, but "good" times won't get me to jettison them from my portfolio. They are just too reliable.

Here's why these industrial giants, which I bought when they were out of favor, are likely to remain in my portfolio through thick and thin.

I'm a dividend kind of guy

I would be lying if I said I wasn't originally attracted to Eaton and 3M because of their dividend yields. Yield and stock price move in opposite directions, and I bought when each of these industrials was sporting a historically high yield. Put another way, I use yield as a rough gauge of valuation, and I bought in when Eaton and 3M looked historically cheap. 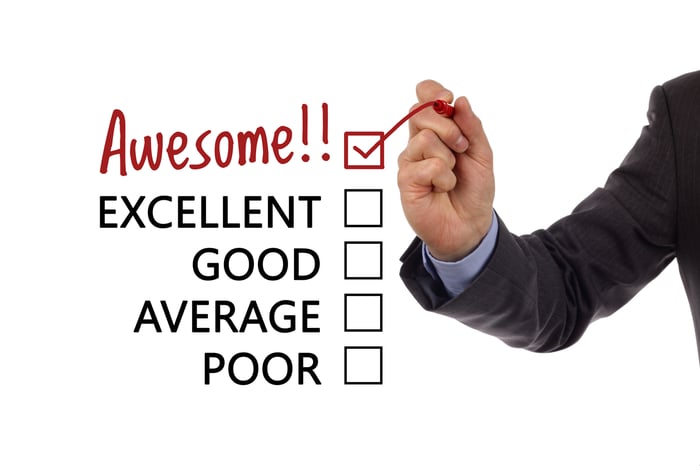 That brings up the second big reason for buying each of these names: They have long histories of increasing their dividends over time. Not perfect histories, mind you -- Eaton paused its string of increases during the 2007-09 recession before starting up again in 2010. Since that point, however, its dividend has increased roughly 200%. 3M has a more regular history, with more than six decades of annual increases under its belt, making it a highly elite Dividend King. The big takeaway here, however, is that history suggests that dividends are very important to both of these companies, which is something I like to see.

And that brings up the biggest problem with these two stocks. They haven't changed their commitment to dividends, but Wall Street has pushed their stocks up and they just aren't as cheap as they once were. To put a number on that, Eaton's yield has fallen from over 4% to around 2.1%, while 3M's yield has gone from over 4% to around 3.1% or so. I've actually toyed with the idea of pulling a little cash out to lock in gains, but I am not considering selling either position in full. And as long as the core stories stay the same, I'm going to want to own both.

Good companies even without the dividends

Eaton and 3M's relative dividend yields and dividend histories are what got me to look at them, but they're not what really got me to hit the buy button. Indeed, they also have attractive businesses. There are a few things I like, especially as a fairly conservative investor.

Diversification is first on the list. Eaton's business has changed a lot in its over-100-year history, but today it spans electrical products, electrical services, aerospace, and vehicles. There's more of a breakdown than that when the company reports earnings, but those are the big highlights. 3M, meanwhile, is spread across safety & industrial, transportation & electronics, healthcare, and consumer, with a massive number of individual products living beneath those headings. You know that diversification is good for your portfolio, but my gut feeling is that it's good for businesses, too. And so long as Eaton and 3M remain diversified industrial conglomerates, I'm going to be a happy camper. 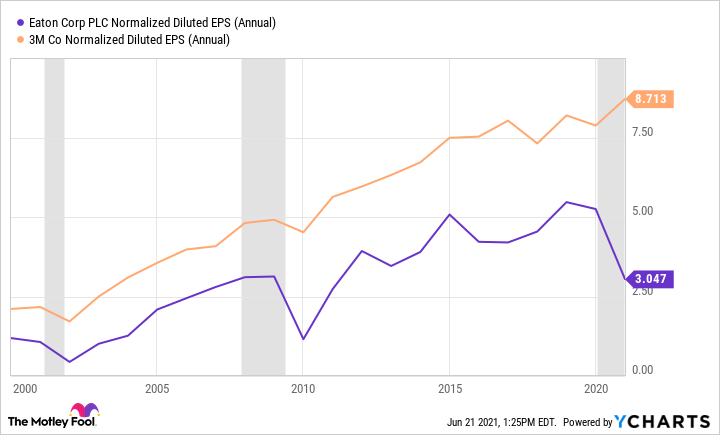 Consistent performance is another reason I like this pair. There are different ways to look at this, but I'm always preparing for the worst-case scenario. So the fact that neither lost money during the early 2000s bear market or the Great Recession was pretty reassuring. Note, too, that the coronavirus pandemic didn't push these names into the red either. To be fair, a key part of this is likely related to their diversification. However, knowing that they can roll with the punches in the hard times helps keep me around.

The last reason I bought -- and don't plan to ditch -- Eaton and 3M is a bit more amorphous. I noted above that Eaton's business has changed a lot over its existence -- well, 3M's story is pretty similar over its more-than-100-year history. These two companies know how to shift with the world around them to ensure they remain relevant. I believe this is something of an institutionalized trait, and I know for a fact that all companies don't possess it. As long as they continue to update their businesses, I'll be a fan of both.

On that front, Eaton recently launched a division that focuses on electric vehicles. 3M, meanwhile, has a long history of investing in research and development that it spreads across its long list of proprietary products. In the first quarter of 2021, it directed 5.9% of sales (a bit over $500 million) to R&D.

Dividend investing is art, not science

Investing is something that you have to feel your way through because there's no hard and fast list that will create a portfolio that's perfect for you. Personally, I like out-of-favor companies with generous dividend yields that also happen to have great businesses that have proven themselves in both good and bad times. Then I like to hold on for dear life, or until something fundamental changes for the worse at the company. I don't think that's going to happen to either Eaton or 3M, so I'm content to just sit back and collect my growing stream of dividends. And if the stocks sell off but the companies remain just as attractive as when I bought them, I'll probably add to my positions. I guess that's not exciting, but it helps me sleep well at night.

If you don't own either of these industrial giants, you might want to put them on your wish list just in case a market sell-off gives you a chance to sleep well at night, too.