Please ensure Javascript is enabled for purposes of website accessibility
Log In Help Join The Motley Fool
Free Article Join Over 1 Million Premium Members And Get More In-Depth Stock Guidance and Research
By Cory Renauer - Jun 24, 2021 at 11:54AM

Investors expecting Gilead Sciences to license Arcus Biosciences' lead asset could be in for an unpleasant surprise.

Shares of Arcus Biosciences (RCUS -7.75%), a clinical-stage biopharmaceutical company, are on the move following a progress report for the company's most valuable asset at the moment. Investors hoping Gilead Sciences (GILD 0.65%) will exercise an option to license domvanalimab have driven the stock 14% higher as of 11:29 a.m. EDT on Thursday.

Earlier this year, Gilead Sciences signed a 10-year agreement to co-develop and co-commercialize a handful of Arcus Biosciences' next-generation cancer therapies. Gilead Sciences still has an option to pay Arcus $275 million for exclusive rights to domvanalimab, one of several anti-Tigit antibodies in clinical-stage testing. 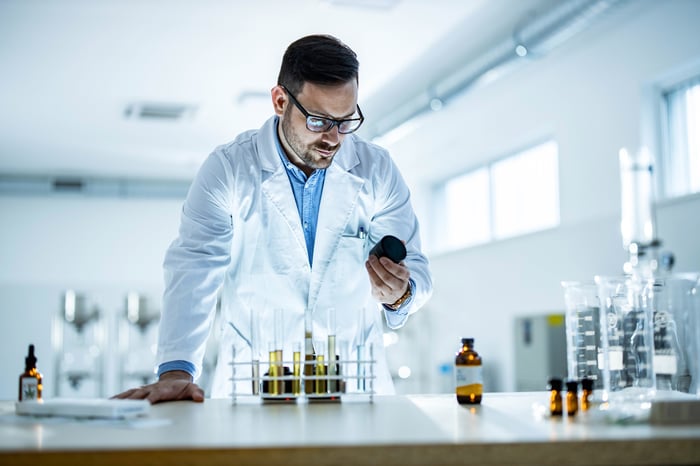 In theory, inhibiting Tigit will make it harder for tumors to hide from the immune system. Early clinical trial results from Arcus Biosciences' peers suggest combining anti-Tigit drugs with other immunotherapies can boost their effectiveness.

Interest in anti-Tigit antibodies has been high ever since Roche (RHHBY 0.46%) shared compelling data for one called tiragolumab in January. Treatment with tiragolumab plus Tecentriq shrank tumors for 31% of lung cancer patients compared to just 16% of patients who received Tecentriq on its own.

The gain that Arcus Biosciences stock made today wasn't very big for a biotech that could have a blockbuster cancer drug in its late-stage pipeline. That's because the company's being unusually cagey about sharing key details from the ongoing Arc-7 trial.

The disturbing nondisclosure Arcus Biosciences made today doesn't necessarily mean that Gilead Sciences won't exercise its option to fully license domvanalimab. Without response rates to be proud of, though, it sure doesn't seem likely.