Please ensure Javascript is enabled for purposes of website accessibility
Log In Help Join The Motley Fool
Free Article Join Over 1 Million Premium Members And Get More In-Depth Stock Guidance and Research
By Demitri Kalogeropoulos - Jun 24, 2021 at 9:21AM

The RV leader flexed its manufacturing muscles this past quarter.

Investors had some good reasons to expect solid sales numbers from Winnebago (WGO 3.55%), especially after peer Thor Industries (THOR) described a booming RV market earlier in the month. But Wall Street was worried about manufacturing and supply chain challenges, and about a potential slowdown as the pandemic threat fades.

Winnebago put most of those fears to rest in its recent fiscal third-quarter report, which points to a sustained sales boost and surging profits on the way as travel picks up. 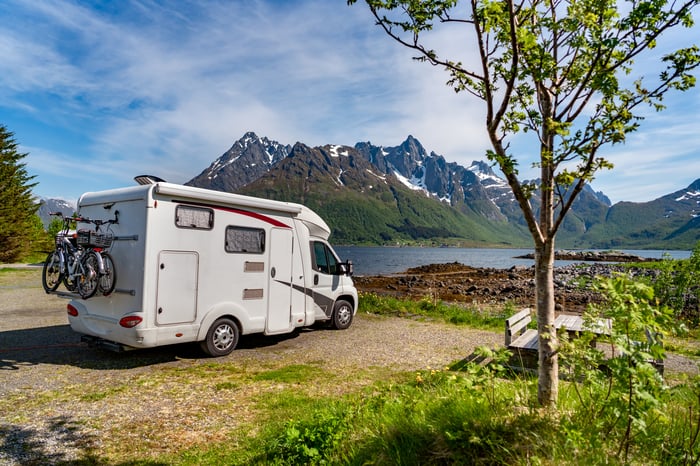 Winnebago's sales more than doubled as compared to the year-ago period, which was impacted by temporary retailing closures. Yet revenue set a new third-quarter record and edged past most investors' expectations.

Towable products made up the bulk of Winnebago's gains in rising 194%. And its more expensive motorhomes nearly doubled sales volumes.

Overall, the company's market share improved to over 12% from 11.5% last quarter during an unusually strong period for the industry. "We capitalized on the prime spring selling season to gain share and drive higher consumer engagement," CEO Michael Happe said in a press release. The CEO praised his team for its ability "to maintain our commitment to manufacturing excellence amid incredible demand."

Thor Industries noted major supply chain issues that were holding up production rates for RVs, just as they have been for many automakers so far in 2021. But Winnebago's manufacturing rates were strong this quarter, likely reflecting its wider portfolio and larger base of production.

The combination of higher prices and low dealership inventory, meanwhile, allowed Winnebago to increase prices even as more customers opted for premium products. As a result, gross profit margin jumped to 18% of sales compared to 8% a year ago. 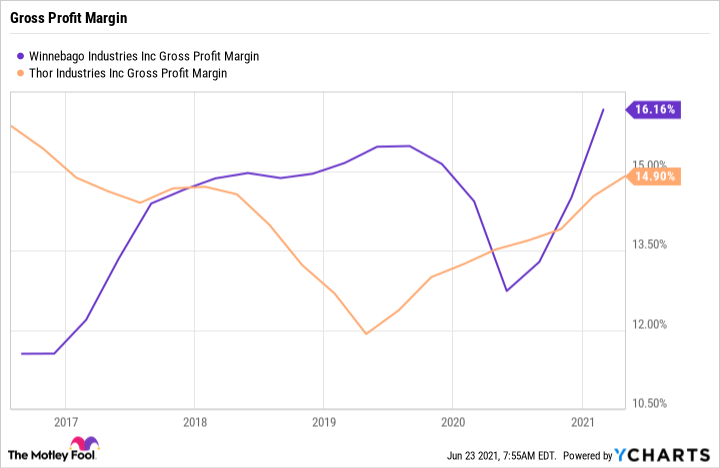 That metric stood at 16% in the third quarter of 2019, before the pandemic, but now appears set to move toward 20% of sales. Executives said Winnebago maintained its production standards through soaring demand, and credited that success for "producing continued, strong profitability." For context, Thor's gross profit margin is sitting at 15% of sales.

Winnebago's backlog continued to swell, with towable product orders crossing $1.5 billion and motorhome orders jumping over 300% to $2.2 billion. It would take several quarters of the manufacturing chain operating near capacity to fill all of those needs and get dealership inventory levels back to normal.

These orders aren't firm commitments, which means investors can't count on backlog metrics to translate directly into sales, especially if an economic downturn strikes. Yet Winnebago is expecting the industry boom times to continue into the foreseeable future, mainly because shoppers are eagerly shifting spending toward outdoor recreation.

Winnebago's manufacturing base gives it better positioning than its peers in meeting that rising demand, which now appears likely to run through at least early 2022.

Unfortunately, the company will have to pay more for many components and labor, and is directing plenty of cash toward its supply chain today. Yet, this quarter's report shows that Winnebago can boost profitability even as it makes these long-term investments. That's a formula for impressive shareholder returns that aren't dependent on industry boom times continuing indefinitely.

Winnebago Has No Time to Rest