Please ensure Javascript is enabled for purposes of website accessibility
Log In Help Join The Motley Fool
Free Article Join Over 1 Million Premium Members And Get More In-Depth Stock Guidance and Research
By Will Healy - Jun 25, 2021 at 9:27AM

Evaluating the two companies amid changing leadership at Intel.

The battle between Advanced Micro Devices (AMD -1.93%) and Intel (INTC -1.13%) has long preoccupied tech investors. After decades of lagging its larger rival, AMD has benefited from a significant technical lead and faster growth rates under the leadership of CEO Lisa Su.

However, since Pat Gelsinger became CEO of Intel earlier this year, he has implemented a plan to revitalize its fabs and catch up technologically. While that does not make Intel a better investment by itself, it may warrant another review of the value propositions of each chip stock. 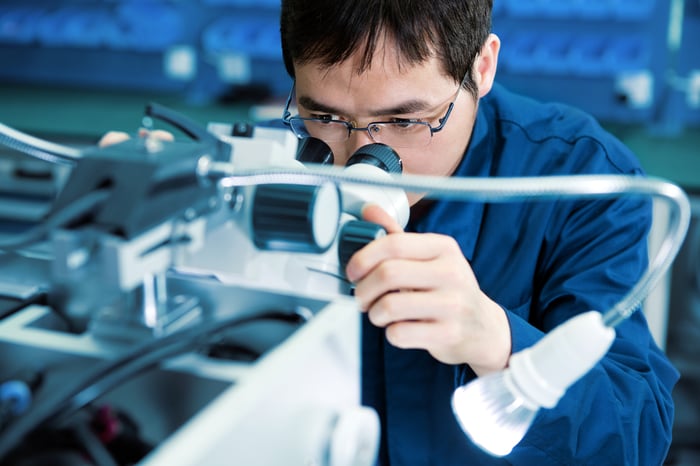 Intel has struggled with limitations regarding its existing 10nm chips and does not expect to manufacture its own 7nm chips until 2023. This stands in contrast to AMD, which released its first 7nm chip in 2019. Moreover, its investors should be excited by the company's client list alone. Not only does AMD provide the GPU for Microsoft's Xbox and Sony's PlayStation, but its chips also power the operations of cars built by Tesla.

Additionally, Intel will probably not bounce back anytime soon. Chip development cycles usually run between three and five years. Thus, even if Intel has placed a viable comeback plan in motion, the market will have to wait years to see any potential results.

However, for all of its successes, AMD depends on Taiwan Semiconductor (TSMC) (TSM -0.83%) to produce its chips. In the midst of a global chip shortage, this leaves AMD dependent on TSMC's production limitations, particularly since TSMC also makes chips for numerous other fabless chip companies.

To add to the dangers, China has recently reiterated its longtime ambition to absorb Taiwan, the location of most of TSMC's fabs. While China has never carried out that threat, such geopolitical tensions may have inspired the U.S. Senate to approve subsidies for onshore chipmakers.

Since Intel produces most of its chips in the U.S., such a capital infusion increases the chances that Intel could find a way to close the technical lead currently held by AMD and TSMC. While an Intel resurgence may appear improbable, investors should remember that AMD's comeback seemed unlikely when Su became CEO in 2014. Thus, investors should not assume that Intel cannot also close the gap.

Despite concerns about both chipmakers, the financials point to neither a meaningful chance of a Taiwan invasion nor a likely comeback of Intel.

AMD reported record revenue of just over $3.4 billion in the first quarter, a 93% increase from year-ago levels. As a result, GAAP net income surged 243% higher to $555 million as lower growth in operating expenses allowed income to rise. This exceeded the 45% surge in revenue, but fell below the 630% increase in net income in fiscal 2020 compared with 2019 levels. A tax valuation allowance of $1.3 billion fueled most of the earnings increase in 2020.

Still, this stands in contrast to Intel, whose $19.7 billion in quarterly revenue was a 1% decline compared with the same quarter last year. In addition, net income fell 41% during that period due primarily to a $2.2 billion restructuring charge. Intel's revenue also rose 8% in 2020 compared with 2019, though net income dropped 1% as Intel's tax rate climbed.

AMD also continues to make strides on the free cash flow front. It generated $832 million in free cash flow, just under half of the nearly $1.6 billion reported by Intel. However, considering Intel earned close to six times as much revenue as AMD, AMD generated significantly more free cash flow per revenue dollar.

Given this difference, one can see why AMD stock climbed by about 54%, compared with an 8% decline for Intel. But these stock increases have made AMD more expensive. AMD sells for about 36 times earnings, compared with a 12 price-to-earnings (P/E) ratio for Intel. 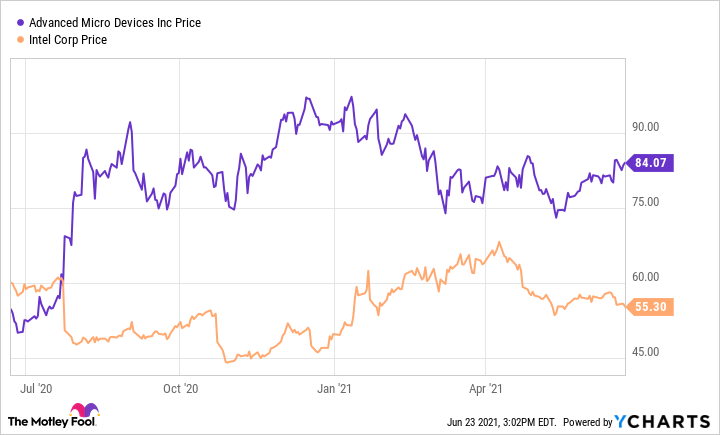 Despite AMD's higher valuation, investors should consider staying with it for now. Its considerable technical lead and much faster growth still make it the more appealing stock.

Indeed, AMD's dependence on TSMC carries with it both supply chain and geopolitical risks. Moreover, Intel's new management and the renewed interest in bolstering U.S.-based fabs point to the possibility of an Intel comeback. However, since investors will not know for years whether Intel will make that happen, AMD remains the safer bet.