The heating, ventilation, and air conditioning (HVAC) industry has several exciting long-term trends behind it. As such, the leading players like Carrier (CARR 1.84%), Trane Technologies (TT 2.34%), and Johnson Controls (JCI 1.59%)will benefit from them. It may not seem like the sexiest industry to invest in, but who cares? Sometimes it's the under-the-radar growth industries that generate the best returns. Here's why these HVAC stocks are set for substantial growth for many years to come. 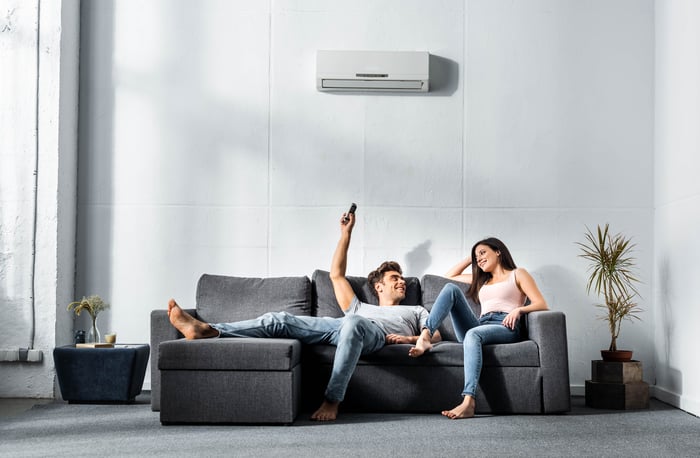 In addition to these trends, the post-pandemic environment will likely create an increased awareness of the need for healthier, cleaner buildings -- something that starts with the "V" in HVAC.

It's not a coincidence that all three companies have been restructured in recent years. The tailwinds behind these industrial businesses are so strong that all three companies have been significantly restructured to focus on investing in them in recent years. For example, Carrier was formerly part of a much larger company, United Technologies, that was split up in 2020.

The split enabled Carrier's management to focus on significantly reducing costs and seek to increase market share through targeted initiatives like growing revenue in emerging markets , and developing its services revenue through its digital initiatives -- more on that later.

Trane Technologies was formerly part of Ingersoll Rand until the latter merged its industrial business with Gardner Denver to create the new Ingersoll Rand company, leaving the climate segment to trade as Trane. Johnson Controls was also a much larger company a few years ago. However, its automotive seating business Adient was spun off in 2016, and it sold its power solutions (automotive batteries) business in 2019. Here again, the main idea is to focus on its core growth business of HVAC and its complementary building systems (fire and safety) solutions.

Given that buildings are responsible for 40% of greenhouse gas emissions globally, it's clear that HVAC suppliers have a key role to play in helping companies reduce their carbon footprint. In fact, at a recent Morgan Stanley conference, Trane CEO Mike Lamach said that "a quarter of the world's emissions happen as a result of HVAC systems in buildings and through food loss and the cold chain," and he believes that figure will grow to 35% by 2030.

Lamach sees HVAC systems as being responsible for "40% to 60% of the energy used in the building." Carrier, Trane, and Johnson Controls own substantive refrigerated transportation businesses that can help reduce food waste.

Meanwhile, Johnson Controls CEO George Oliver believes his company has an opportunity to benefit from the hundreds of billions worth of investment necessary in commercial buildings in order for companies to achieve their aim of net-zero carbon emissions.

The solution to helping companies meet regulatory requirements and meeting demand for HVAC comes from the more efficient pump and refrigerant technology offered by these three companies. However, it also comes from the increasing use of digital applications in connected buildings.

By using digital technology, such as Johnson Controls OpenBlue solutions, building owners can use artificial intelligence to improve a building's performance and better predict maintenance requirements.

That's a win-win scenario for building owners and high-quality HVAC suppliers alike. The owners get more efficient buildings, and the HVAC companies get to sell value-added digital solutions. Moreover, the addition of digital technology will create more loyal customers and improve attachment rates, leading to improved service revenue over the long term -- a key aim for Carrier.

As such, digitization will improve revenue growth and profit margins for the leading HVAC players.

The growth prospects are not lost on Wall Street analysts, and the consensus is for mid-single-digit revenue growth for all three for the foreseeable future. Based on the analyst consensus for free cash flow, Johnson Controls and Carrier look like a good value right now. 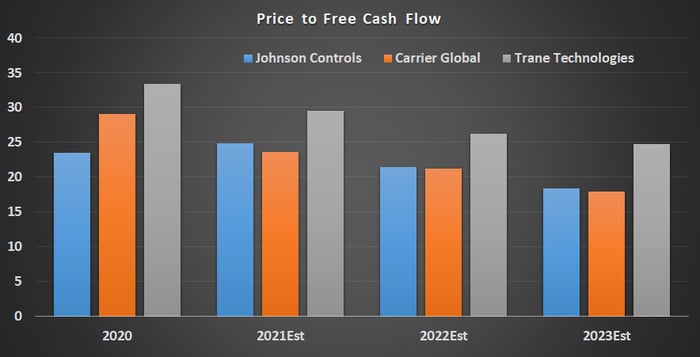 All told, the HVAC industry offers a compelling combination of long-term revenue growth and margin expansion. There's a definite need to provide HVAC and ensure it complies with carbon emission aims while adding value through digital technology. That environment should favor Carrier, Trane, and Johnson Controls for many years to come.

Is Johnson Controls Stock a Buy?

Why Shares in Johnson Controls Soared in October

This Red-Hot Industrial Stock Looks Like a Good Value

Stock Market Sell-Off: 3 Fantastic Choices to Buy Ahead of the Recovery
349%