Please ensure Javascript is enabled for purposes of website accessibility
Log In Help Join The Motley Fool
Free Article Join Over 1 Million Premium Members And Get More In-Depth Stock Guidance and Research
By Jeremy Bowman - Jun 29, 2021 at 11:30AM

This retail winner has more room to run.

Home Depot (HD -0.17%) may not fit your definition of a growth stock, but you might be surprised to learn that the stock has appreciated more than 1,500,000% since its IPO in 1981. That makes it one of the best-performing stocks in history. Today, Home Depot is the leader of the massive home improvement retail segment, ahead of rival Lowe's, and is nipping at the heels of Walmart to be the world's most valuable brick-and-mortar retailer.

Though Home Depot has been a big winner during the pandemic thanks to the boom in housing and home improvement products, the Dow Jones stock still looks like a good candidate to double in the next few years. Here are a few reasons why. 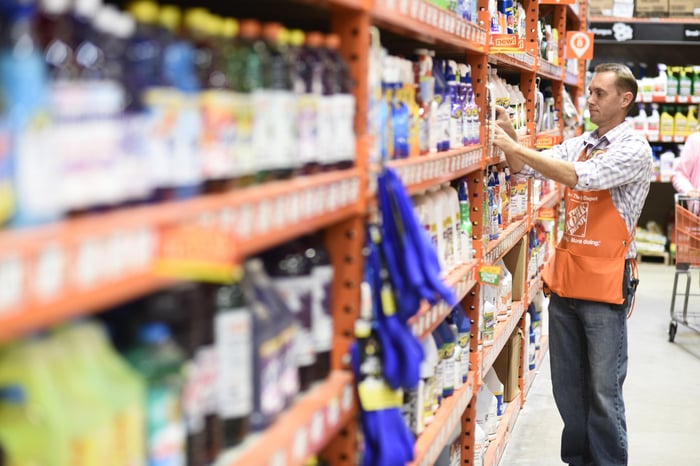 1.  The housing boom isn't over

While there are signs that the pandemic-fueled surge in home prices is easing as lumber prices fall and Americans return to their pre-pandemic activities, there are a number of factors that support solid growth in home prices in the coming years.

First, mortgage rates are still at historical lows, with the 30-year fixed at around 3%. That makes the cost of owning home less than what the sticker price indicates, supporting the increase in prices. Though interest rates are expected to rise over the next few years, the upward drift in mortgage rates should happen slowly. Additionally, the rise of remote work should also continue to encourage an exodus from high-priced apartments in major cities into single-family homes in more affordable locales, where homeowners have more square footage to spend on -- as well as outdoor needs like landscaping and decking.

Americans now have more home equity than ever before, and can tap into it to do the kind of remodeling and renovations that are the bread and butter of the company's business.

Home Depot's strategy isn't complicated. The company has held back on opening new stores in favor of spending money on in-store improvements, e-commerce, and returning capital to shareholders through dividends and share buybacks. It calls that strategy One Home Depot, and it's taken it to the next level recently with One Supply Chain, its initiative to invest $1 billion to create the fastest, most efficient delivery network in home improvement. That includes product availability and last-mile delivery.

The results of that strategy have been a rewarding mix of growth and income, and the company has a history of setting growth targets and knocking them down as it grows comparable sales, operating margin, and return on invested capital (ROIC).

The company has also been a dividend growth star, with its dividend more than doubling over the last five years, and it's increased it by 10% or more every year since 2011. Similarly, shares outstanding have fallen by about a third over the last decade, helping to lift earnings per share and adding value for shareholders.

You might think that Home Depot would have crushed the S&P 500 during the pandemic after the breakout performance it had. After all, comparable sales jumped 20%, and earnings per share rose 16% to $11.94 as the company absorbed some cost-related headwinds early on in the health crisis.

But in spite of that surge in the business, the retail stock has only modestly outperformed the broad market index since the start of 2020. 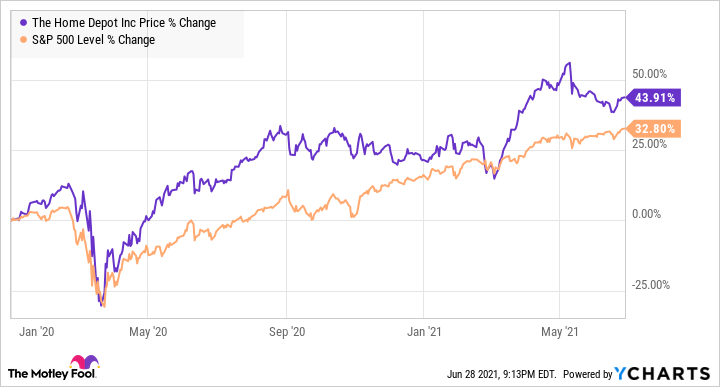 Management has declined to provide guidance this year due to the uncertainty around the economic reopening. But relative to the S&P 500, the stock is about as cheap as it's been a long time, trading at a price-to-earnings ratio 23, half of the S&P 500's at 46 -- and that's after a blowout first-quarter performance.

For a company with the history, industry leadership, and competitive advantages of Home Depot, that seems like mistake. While it faces difficult comparisons with 2020, sales in the home improvement segment increased 10.5% year-over-year in May, according to the Census Bureau, which bodes well for Home Depot's second quarter.

Factor in the company's commitment to returning capital to shareholders, the continuing boom in the housing market, and the improving margins in the One Home Depot strategy, and the stock has a good chance of doubling in the next five years.